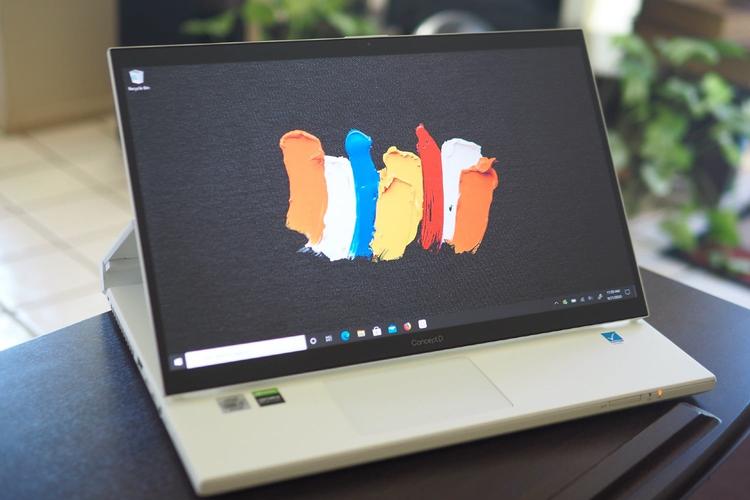 The Acer ConceptD 7 Ezel Pro isn’t quite unique. But it is unusual, even delightful. In equal measure it’s also beautifully built, intriguingly engineered, expensive and slightly flawed. This is not just another high performance laptop.

The main event involves an innovative dual-hinged display. It creates a whole new world of ergonomic options in terms of screen positioning and user input. Add in an integrated Wacom EMR pen and you have an appealing portable solution for digital artists and content creators.

That’s enhanced by the quality of the gorgeous 15-inch full 4K touchscreen display with Pantone validation. Acer has also made this a powerful rig with high-spec components, albeit the hardware in this review unit is a couple of generations old and Acer has yet to update the chassis with Intel’s latest 12th Gen CPUs.

But you still get a powerful eight-core CPU and some serious Nvidia GPU firepower. With all that performance and engineering comes significant heft. This is a big, beefy system. Indeed, at 2.5kg it’s noticeably heavier than the most obvious competing laptop, the Microsoft Surface Laptop Studio, which offers a similar, but not quite identical dual-hinged display.

Pricing for the ConceptD 7 is highly variable with the sheer range of configurations on offer and both older and newer internal components available. As configured here with the 10th Gen Intel CPU and Nvidia RTX 2070 Series graphics, you’re looking at around $3,000/£2,900. But an update to a newer 11th Gen CPU and RTX 3080 graphics is actually better value, clocking in at $3,499 (UK pricing for this config isn’t currently available).

Pantone is a validation system based on a reflective model of color and involves an inherently smaller color space than emission-based color gamuts, such as Adobe RGB and DCI-P3. In fact, it’s actually less demanding than sRGB. So, it’s not hugely relevant for creating digital content like video and images, instead it’s useful for workflows that involve printing. However, Acer also claims fully 100 percent coverage of Adobe RGB, which certainly endows this portable rig with decent content creation chops.

Of course, what really marks the ConceptD 7 out is that funky dual hinge combined with a 4K touchcreen and a Wacom EMR input pen that lives in a slot in the side of the chassis. Like all such EMR pens, it doesn't require charging and derives its power from the display itself. 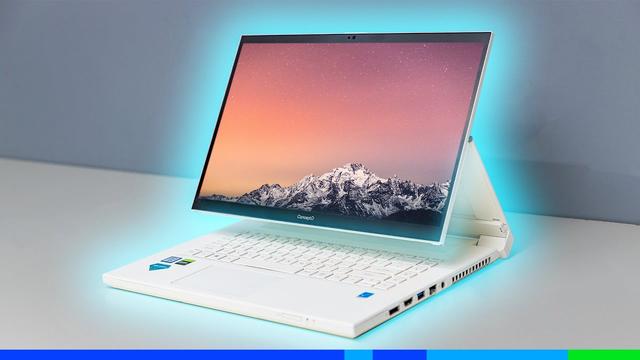 As for speeds and feeds, our review unit makes do with slightly older hardware in the form of an eight-core 10th Gen Intel Core i7 processor and Nvidia’s GeForce RTX 2070 graphics. Acer can configure this system with Intel 11th Gen processors and Nvidia 30 series graphics. 1TB of NVMe SSD storage and 16GB of RAM round out the main spec touch points.

Ports wise, everything is located on the sides of the chassis as a consequence of the hinge design. On the left, Acer has specified two USB Type-C with full Thunderbolt 4 ports, a single USB-A and a headphone jack. On the right, you get another USB-A, plus HDMI and a full-sized DisplayPort socket, ethernet and the power connector.

So, how does that double-hinge work and what is it actually good for? Acer says it offers six different modes or positions. There’s conventional laptop and tablet configurations, ‘Stand’ which involves the screen forming a tent over the keyboard, ‘Share’ with the screen facing up and parallel to the keyboard, ‘Display’ which is a clamshell presentation mode with the screen reversed and finally ‘Float’.

In many ways it’s the latter that’s most intriguing. It brings the display closer to the user and, once you’ve tried it, you may not want to go back to a conventional laptop hinge. What’s more, the hinge has sufficient 'stiction' that it’s viable to use the pen for drawing in this position. Notably, this floating configuration is something Microsoft’s otherwise similar Surface Book Studio doesn’t offer.

Speaking of pen input, the supplied Wacom EMR pen combines nicely with the slightly matte screen surface to provide that touch of resistance that digital artists appreciate. The pen itself is probably thinner than most serious professionals are used to or prefer. However, the screen is compatible with other Wacom EMR pens.

Arguably the least convincing configuration for the Acer ConceptD 7 Ezel Pro is tablet mode, largely thanks to the 2.5kg heft of the device. That said, the main takeaway in this context is that the hinge allows not just the six headline configs, but an almost infinite array of options.

Elsewhere the keyboard is very solid and reasonably tactile, though the amber-colored backlighting is pretty ineffectual for actually identifying the keys - the light mainly bleeds around the edges of the keys rather than illuminating the symbols. The trackpad is also a little smaller than we’d prefer.

By most metrics, this is a powerful laptop PC with an eight-core Intel CPU and proper dedicated graphics. However, the latest Intel and AMD mobile processors give the 10th Gen Intel Core i7-10875H chip used here a bit of a hammering. By way of example, the ConceptD 7 scores 1,319 single-core points and 7,647 multi-core points in GeekBench 5. The latest Intel Core i9-12900HK is good for over 1,800 and 13,000 points respectively. In our 4K HEVC video encode test, the ConceptD 7 returns 6fps. Again, the latest Intel 12th Gen chip is nearly twice as fast.

Similar applies to the RTX 2070 GPU. Its score of 82,979 in Geekbench’s OpenCL compute test is decent and compares well with Apple’s top M1 Max chip. But the latest RTX 3080 mobile GPU can hit over 150,000 points. This laptop has plenty of performance for image editing, therefore. But for serious video production, there are better options.

Another area that slightly suffers from the ageing Intel hardware is storage performance. The 1TB NVMe SSD isn’t exactly a slouch, with 3.5GB/s read speeds and 2.8GB/s writes. But you’re limited to PCIe Gen 3 speeds rather than Gen 4 by the older Intel platform.

As for screen performance, the 15.6-inch 4K panel is a beaut’. Colors, contrast, viewing angles, pixel density, it’s all fabulous. The one distraction is the tiny bit of sparkle and grain that’s a consequence of the matte coating for the touch input. It very slightly robs the display of clarity.

The one other issue with the display involves refresh rate. Limited to 60Hz, a higher refresh of 120Hz like that of the Microsoft Surface Book Studio would reduce latency when using the pen. It’s not a major problem

Finally, for battery life you can expect around six hours of video playback. That’s reasonable for this class of PC laptop but also looks poor compared to Apple’s latest MacBook Pros. But then those systems entirely lack features like the double hinge and touchscreen input.

Genuinely useful alternatives to the dominant clamshell laptop form factor are few and far between. But the Acer ConceptD 7 Ezel Pro’s dual-hinge design isn’t just a gimmick. It’s beautifully executed, creates a whole new world of viewings and input options and makes you question whether it ought to be the norm for most desktop replacement laptops.

This is also a nicely engineered machine with a fantastic 4K touch screen and high-precision Wacom EMR pen input. As a portable tool for digital design and artwork, it’s really exceptional. Whether it makes sense from a pure image and video editing perspective is less convincing. For the money, a Windows laptop with newer Intel or AMD chips will chew through video workflows more rapidly, Apple’s latest MacBook Pro machines arguably even more so.

At 2.5kg, it’s a big old beast, especially in tablet mode, and doesn’t offer terribly impressive battery life. It could also do with an upgrade to the latest Intel CPU tech. But even in this configuration, it’s a fairly powerful system. All told, the Acer ConceptD 7 Ezel Pro is a niche option. But if its particular skill set appeals, there’s nothing else quite like it.