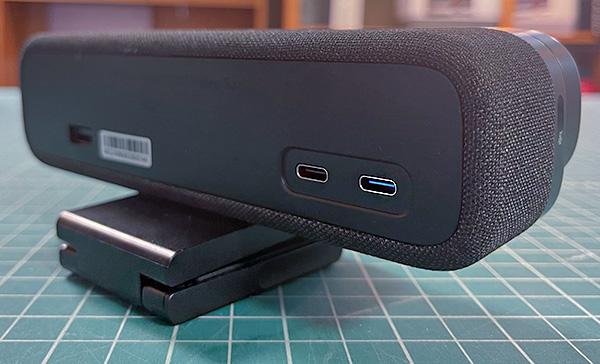 REVIEW – Working from home has been the best thing to happen in my career as a children’s publisher art director since—I don’t know when. However, as good as the transition to work-from-home was, it does present some challenges you don’t face in an office environment. One of the biggest challenges—for me—is getting the optimal setup for remote meetings. I know—I know, any recent laptop or smart-pad will have a built-in camera for those Zoom, Teams, or whatever meetings you need to attend. But does anyone consider the video—and audio—quality that’s seen by others? And have you seen how bad some of your co-workers look during meetings using their stock 720p resolution cameras? Ugh.

I may be a bit obsessive, but I like to have as sharp and well-lighted an image as possible that I can present to my co-workers (no matter how ugly I am). My MacBook Pro camera just doesn’t cut it. Anker, a company known for quality cables, chargers, and hubs, may have a solution— the AnkerWork B600 Video Bar webcam.

AnkerWork is the “business division” of Anker. They make speakerphones, headsets, microphones, and webcams. The B600 is technically a webcam, but it’s a lot more. Think of it as a webcam on steroids. Along with a 2K camera, the B600 includes a built-in adjustable light, 4-mic array, and dual speakers.

The B600 Video Bar has what Anker calls VoiceRadar. This is noise-canceling technology that minimizes background noise while amplifying voices, making it easier for others to hear you. Included dual speakers help you hear other speakers more clearly.

If lighting is an issue in your home workspace, the B600 has a fold-out light bar with MagicSight (another Anker term). MagicSight will automatically balance color temperature, so you won’t appear too yellow or too blue. Brightness is also automatically adjusted as lighting conditions change.

Then there’s SoloFrame, which allows the camera to follow you if you move out of the frame.

What’s in the box

The first thing you notice when opening the AnkerWork B600 Video Bar box is how nice everything looks and feels. It reminds me of opening an Apple product. The B600 itself is surprisingly heavy—so much so that I would be concerned attaching it to a thin laptop lid—such as on my MacBook Pro. Since my main monitor is a thick XP-Pen 24 Artist Pro, it’s not an issue. But the B600 is well made. Just holding it is a treat. 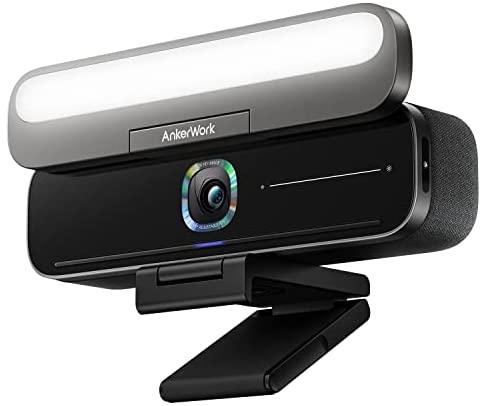 The clip that holds it to a monitor is similar to many other webcam clips. It looks and acts like an adjustable upside-down V. Just squeeze until it feels tight. The “V” clip on my previous webcam was screwed into my shelf above the monitor. It never moved after that. I may do that to the B600. My apologies to Anker for messing up a flawless surface with a drilled hole. If needed, the B600 is designed to work on a desktop tripod (not included).

Connecting the AnkerWork B600 Video Bar webcam’s two USB-C ports to a computer is simple. There are two cords: power to USB-C and USB-C to USB-C. The Power cable attaches via USB-C as does the video cable, but the two connections cannot be swapped or the webcam will not work. There is a USB A port on the back, but this is exclusively used for Anker wireless headsets with a receiver.

Once the connection is made, the AnkerWork app must be downloaded. This app completes the setup. My previous webcam had no app—it was just plug-and-play. However, the B600 has many options and video enhancements that require app settings.

A blue LED light lets you know that everything is properly connected. If the mic is muted (done by a simple touch to the left side of the camera), the LED light turns red. If the red light is blinking, something is not right and needs to be corrected.

Touching the right side of the video bar turns the light on or off. a touch-sensitive slider on the video bar’s front adjusts the brightness of the light.

The app has all kinds of settings built-in. You can adjust color temperature (warm lighting to cool), focal distance, resolution (360p, 720p, 1080p, 2K), flicker filter, brightness, contrast, and more. You could easily spend 30 minutes setting up the perfect vision of how you want yourself presented. And that’s in addition to any settings you wish to set in the streaming apps you use.

Once the app is set up, you only need to lift the light bar to turn on the B600. For my use with the Zoom app, I don’t need to reset anything unless I want to change something. It remembers my last settings.

I did have a minor issue with mirroring. The previous webcam I used showed me as mirrored on my monitor, but not to others on my Zoom call. However, the B600 shows others what I see, so my image cannot be mirrored for me only. It’s weird seeing the “wrong” hand move on my screen. Although it’s correct, I’m used to it being similar to looking in a mirror. It’s something I need to get used to.

The AnkerWork B600 Video Bar webcam’s image quality is about as good as it gets. My last cam was 1080p resolution and I thought that was great until I saw the 2K image. The built-in automatic light adjustment has lighting that varies as your face moves around in light or shadow. Not only that but as you move around, the camera follows and automatically zooms in and out to keep you centered in the frame as much as possible. It’s like having a personal cinematographer. Note that if the camera “movement” bothers you, it can be disabled in the app.

Before using the B60, any audio from the previous webcam came through my large desktop speakers (the webcam had no speakers). This was overkill for audio because of the speaker size. Plus there was the risk of echo as the webcam mic picked up the speaker’s audio. The B600’s 4-mic array and built-in speakers work together to eliminate any echo effects. Co-workers can hear me perfectly and I can hear more clearly since the B600 speakers are tuned for vocals. Volume for both mics and speakers is set in the app.

The AnkerWork B600 Video Bar is not cheap. But it’s built so well and feels like a quality piece of tech. It works perfectly and looks great doing it. I would not recommend it for laptops unless it sits on a tripod and not the screen/lid. If you work from home and spend much of your time in online meetings, the B600 can help you look your best to your co-workers and maybe advance your standing since you look so good. Who knows?

Price: $219.99 USWhere to buy:AmazonSource:The sample of this product was provided by Ankerwork.

is it worth buying a used apple laptop