Home Article Apple's Universal Control for Macs and iPads is now here. Here's how it works. 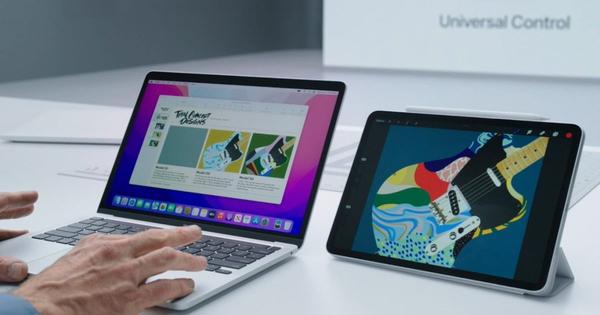 Apple's Universal Control for Macs and iPads is now here. Here's how it works.

Now that Apple's macOS 12.3 and iPadOS 15.4 are here and available to everyone, it's time to check out one of the coolest new features they've brought us: Universal Control.

Originally announced with the launch of macOS Monterey in June 2021, it took a while for Universal Control to actually become available to end users. It's a feature that allows you to seamlessly control several Macs and iPads with one mouse and keyboard. We tested the version that went live with the latest betas of iOS and macOS last week and here's what we've found.

This is the part that will probably confuse most users: How is Universal Control different from Sidecar, which has been available since macOS Catalina? The two features are similar, but there are important differences.

Sidecar lets you turn an iPad into a secondary display for your Mac. You manage it as you would any secondary display using the "Display" menu in macOS' menu bar and, once enabled, the iPad simply provides more screen real estate. You cannot run any software on the iPad itself, though you can start any app you want on your Mac and then drag its window to the iPad's display.

Universal Control is different in several key ways. It can connect more than two devices and it works across (different) Macs — not only with a Mac and iPad combo. For example, if you have an iMac, an iPad, and a MacBook Pro, you can connect all three via Universal Control, and then launch and use native apps on the iMac and iPad, all from your MacBook Pro's keyboard and trackpad.

Both features require all devices to be signed in to the same Apple ID, and have Bluetooth and Wi-Fi enabled, and Handoff turned on. Devices have to be within 30 feet of each other, and they must meet the system requirements, which can be found here for Sidecar and here for Universal Control (scroll to the bottom). Finally, the devices must not be tethered to each other. You can also use both Sidecar and Universal Control with a USB cable if you prefer.

How to enable Universal Control

The feature should be enabled by default after you update your devices to the latest OS, but you can manually disable or enable them by going to System Preferences > Displays > Universal Control.

The third option is disabled by default.Credit: Apple 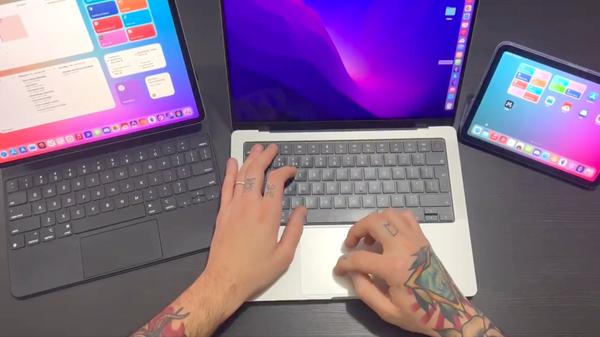 You'll find three options there: One to enable the feature altogether, another to enable pushing through the edge of the display to connect to the other device, and the third to automatically reconnect to nearby Macs and iPads.

What can Universal Control do?

Universal Control is a pretty big step towards seamless integration of all of Apple's operating systems. It's also a very convenient feature for pro users who often switch between several devices.

Imagine having a desktop machine that you use for long, arduous CPU-intensive tasks. With Universal Control, you can quickly check how those tasks are going from, say, a MacBook. You can also use an iPad and a Mac side-by-side for the additional screen real estate (I, for example, mostly used the iPad to have an always-open Slack window next to my MacBook).

Depending on your workflow and setup, you might want to use Universal Control to always control several Macs and/or iPads with a single mouse and keyboard (you don't have to use Apple's mice and keyboards as third-party devices will work, too).

The integration goes a bit deeper than simple mouse and keyboard sharing. You can, for example, drag files from one device to another, though there are limitations for this. When dragging a file from a Mac to an iPad, you must have the appropriate app open on the iPad (for example, Photos if you're dragging and dropping a photo), otherwise the iPad won't do anything with your file.

Does it work well? Are there bugs?

I tested Universal Control with my 13-inch, M1 MacBook Pro and the latest iPad mini to mixed results. On one level, it's fascinating how Apple managed to translate mouse/trackpad input into something that works on the iPad, which was primarily designed for your fingers and Apple Pencil. For example, bring the circular pointer to the line that shows up at the bottom of the iPad's display when an app is open, and the pointer will melt into the line, indicating that you can now drag it up to exit that app. It was also cool to be able to switch to an iPad app from my MacBook and just start typing on the keyboard, with copy and paste working, too.

One cool use case for Universal Control with a MacBook/iPad combo is providing you with an almost-professional, multi-screen setup when on the go. Lugging a secondary display around is definitely less viable than carrying an iPad, which typically fits in the same bag as your MacBook. I like working outdoors, be it on a park bench or at a beach bar, and being able to work with a two-display setup at such spots was great (though I did get my share of sideways looks, indicating that I'm some sort of geeky showoff).

On the other hand, the experience was still just a bit too inconsistent for me to use daily. Some gestures, such as three-finger swipes, didn't work that well, though I did get better at it with practice. Sometimes the iPad would just disconnect from the MacBook, for no apparent reason.

I don't use Apple's "Natural" scroll direction on my MacBook, meaning that scrolling went the opposite way on the iPad (in retrospect, now I see why Apple has made "Natural" scrolling the default). Also, I couldn't get the exact same keyboard layout on my MacBook and iPad, which threw me off when switching from one to the other.

These minor annoyances piled up to the point that I'd rather use Sidecar for the additional real estate simply because the experience then remains the same across devices. But Universal Control is definitely the more powerful feature, giving you actual control over your iPad. Also, it gives you access to the iPad's entire display, while Sidecar shows a menu bar on the bottom and left side of the iPad's display, eating into available screen real estate.

I haven't had a second Mac to test Universal Control across two Macs, but I reckon this may be a better use case. Unfortunately, Universal Control won't work across Windows or Linux machines. For that, you'll have to use a third-party tool such as Synergy.

It's worth noting that, at time of testing, Universal Control was clearly marked as beta software. Some bugs may have been squashed between then and now, and Apple may fix other issues in the future.

Use it or leave it?

Universal Control is a neat Apple feature that still needs a bit of polishing. Power users will love the opportunity to control several Macs with a single mouse and keyboard, though the experience will vary widely depending on your setup and workflow. You should try it out, just don't expect miracles.

what to do if apple laptop won't turn on