Home Article Apple Studio Display has a low quality camera, but Apple will fix it with an update

Some of the first reviews of the new Apple Studio Display went live, and while most of them are positive about the display quality and comprehensive set of features, many complained that the camera quality is just not adequate. Many reviews claim that the web camera quality was too low, and it didn’t live up to the standards. Since then, Apple has confirmed the issue and said that it would roll out a software fix to improve the quality of the camera.

The Apple Studio Display set the expectations with a feature-rich and elegant design monitor that claims to do it at an affordable price tag that undercuts the competition. The Studio Display has a 12MP, f/2.4 aperture, 122-degree field of view camera built-in that features Center Stage, allowing the user to be followed in a small area. Apple described the feature as:

“12MP Ultra Wide camera with Centre Stage. Studio Display includes a highly advanced camera with a 12MP sensor and a 122-degree field of view. And thanks to Apple silicon, it features Centre Stage, which comes to Mac for the first time. Centre Stage keeps you centred in the frame as you move around, making video calls more engaging. When others join or leave the call, the view expands or zooms in. It also works beautifully with your favourite video conferencing apps.”

However, the reviews say and show otherwise. The quality of the images taken with the Studio Display appears to be much lower quality than what we expected, and it doesn’t appear to deliver. Joanna Stern, from The Wall Street Journal, posted an image on Twitter confirming the results with an example.

Gizmodo also confirmed the results in their review:

“It’s…not great. I snapped a selfie with some studio lights filling my room and the camera accurately captured my rosy skin tone and taupe long sleeve while keeping my face evenly lit. But my skin looked too smooth and the image was noisy, even when I viewed it on my Macbook Air. I’d still use this instead of my Logitech C920 on Zoom calls; it isn’t as good but it’s good enough that connecting an external webcam wouldn’t be worth the hassle.”

Apple has already confirmed to_The Wall Street Journal_ and Gizmodo that the Studio Display has a software bug, resulting in lower quality web camera performance. It promised that it will be fixed in a future software update.

“We discovered an issue where the system isn’t behaving as expected. We’ll be making improvements in a future software update.”

Mac Studio teardown reveals SSD storage might be upgradable after all 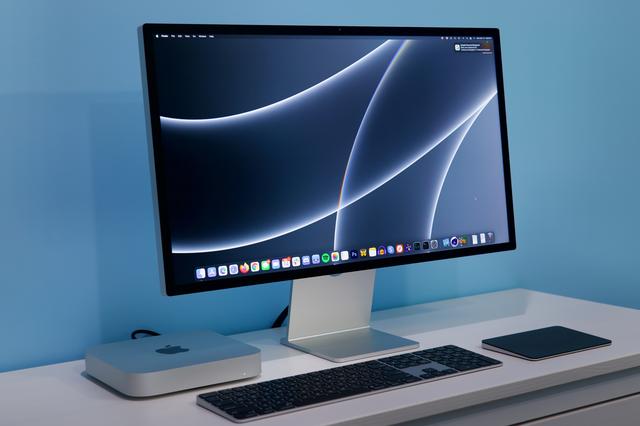 A report from reliable Apple leaker Mark Gurman has revealed the possible launch dates of the upcoming MacBook Air and MacBook Pro.

Click here to save on the latest 14-inch and 16-inch MacBook Pro models, and other great products

Check out the latest Apple deals, where you will find up to $250 savings on the 14-inch MacBook Pro laptop and other great products on sale

A user recently discovered that the latest Apple Studio Display is running the full-fledged iOS 15.4 software on the monitor, which is powered by the Apple A13 Bionic chipset.