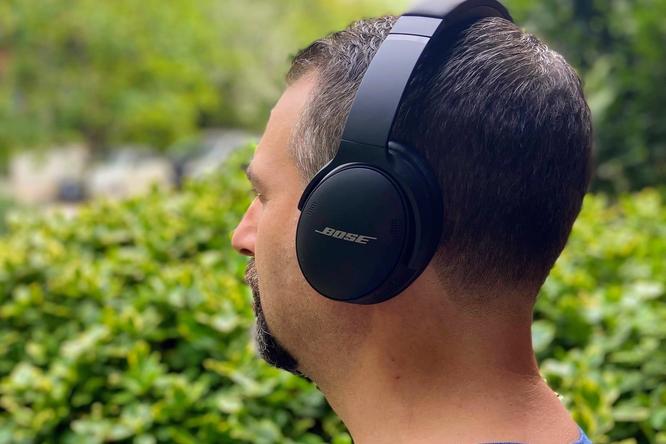 When Bose released its $379 Noise Cancelling Headphones 700 (NC 700), many wondered if the company had abandoned its tried-and-true QuietComfort 35 II (QC 35 II) design, which, until the release of the NC 700, had been its flagship active noise canceling cans.

Those fears, it turns out, were unfounded as Bose revealed its $329 QuietComfort 45 (QC 45) earlier this year. But the QC 45 aren’t your typical upgrade. Bose has definitely made improvements, but it decided to remove some features, too.

Did Bose remove too much? Let’s check them out.

What’s in the box?

Bose continues to do a good job with its packaging — the QC 45 box is going to be very easy to recycle locally thanks to its elegant but plain cardboard. The sole exception are the foam inserts used to keep the headphones from moving about in transit. Inside, you’ll find the QC 45, a USB-A to USB-C charging cable, a 2.5mm to 3.5mm analog cable, and a zippered carrying case. Once again, Bose has elected not to include its $9 airplane adapter, an odd choice given the QuietComfort line’s loyalty among air travelers.

For the QC 45, Bose has focused on evolution, not revolution. After all, if you want something really different, that’s what the NC 700 are for. Apart from a few small changes, the QC 45 are indistinguishable from the QC 35 II — you get the same flat-folding hinges and the same lightweight but durable construction — even the physical controls are identical, including the sliding power/Bluetooth switch and play controls on the right earcup, and the action button on the left.

The biggest change is to the materials. Gone is the suede-like Alcantara material from the inner portion of the headband, replaced instead with the same synthetic leather Bose uses on its ear cushions. The synthetic leather will likely wear better than the Alcantara, but it also slides around on your head a bit more. That’s a key consideration if you’re in the habit of wearing full-size cans at the gym.

The ear cushions occupy that perfectly comfy middle ground between firm and soft.

Bose also has opted for a slightly more conservative finish to the plastic, which now is almost matte, having lost some of the satin shine from the older model. Even the earcup logos have been de-emphasized, with subtle silver paint replacing the raised metallic lettering.

For some folks, the simple change from MicroUSB to USB-C charging (which Bose should have used on the QC 35 II) is enough to make the QC 45 worth considering.

The QuietComfort line of headphones has always been among the most comfortable set of over-ears you can buy, and the QC 45 continues this tradition. The ear cushions occupy that perfectly comfy middle round between firm and soft, while the size and shape of the earcups makes these cans some of the few that don’t put pressure on any part of my ears. They’re even comfy when wearing glasses.

The headband exerts just enough clamping force to keep everything where it needs to be. It also keeps the band from creating a pressure point on the top of your head. Curiously, the QC 45 are actually a tad heavier than the QC 35 II — 8.5 ounces versus 8.3 ounces — but you’d never know it. I still think the NC 700 are more comfortable overall (despite being a hair heavier at 8.9 ounces), but the difference is marginal.

I still can’t understand why Bose designs its cans to sit flat against your collarbones with the ear cushions facing up, instead of down (the way Sony does it), which is way more comfortable.

Wireless stability and range are both superb, indoors and outdoors. 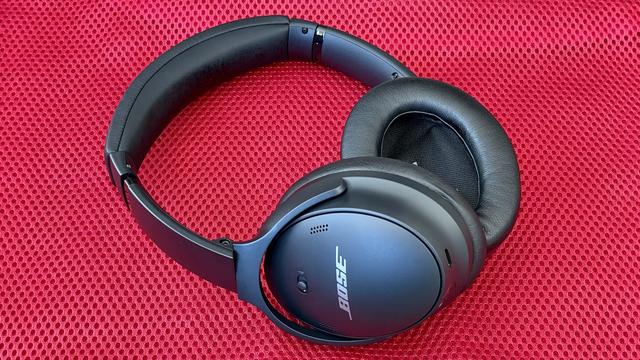 There’s not a whole lot to say much about the controls — they’re exactly what you need, and they work really well. The three buttons on the right earcup let you control calls, playback, volume, and track-skipping, while the action button on the left lets you switch between active noise cancellation (ANC) and transparency modes.

But there are two big differences between the QC 45 and the QC 35 II: First is that the action button no is longer configurable to work with Amazon Alexa or Google Assistant. In fact, Bose has ditched these two voice A.I.s altogether, leaving you with whatever is built into your phone. If you want the added power of Amazon or Google, you’ll need to spring for the NC 700.

And there also no longer are multiple levels of ANC. You get just the two modes — ANC and transparency (more on these later).

I’m torn on the slider power button. On the one hand, you’ll never accidentally turn it on, something that is easy to do with the NC 700. On the other hand, anytime you use a mechanical sliding switch for a function that is used as heavily as power, you risk having it wear out, which likely explains why there are several guides on the web that show you how to replace a broken power button on the QC 35.

The sound is really enjoyable and lends itself to all but the most bass-heavy genres.

The one thing that is missing is wear detection — the ability for the headphones to know when they’re on your head. JBL’s Tour One has that feature, as does Sony’s WH-1000XM4. Even some very affordable noise-canceling models like the Wyze Headphones have it. But Bose has yet to give its buyers the ability to automatically pause music when they remove their headphones.

Connecting the QC 45 is a snap, whether in Android or iOS, and it’s even easier to take advantage of their Bluetooth multipoint capability for connecting a second device simultaneously like a computer. Just slide the power button a little further and wait for the prompt telling you it’s ready to pair with a second device. Wireless stability and range are both superb, indoors and outdoors. Own a Bose soundbar or wireless speaker? The QC 45’s SimpleSync feature lets you easily connect them to these other devices.

All of Bose’s recent headphone products, like the NC 700, QuietComfort Earbuds, Bose Sport Earbuds, and the new QC 45 use the Bose Music app instead of its Bose Connect app. The Music app gives you the same ability to update firmware, adjust settings, and see key info like remaining battery life, but it’s not as full-featured. You can no longer access Bose’s Music Share function that lets two compatible Bose headsets share a single audio stream from a phone, and there’s no “find my product” option. These features might not matter to you, but it’s still strange to see them go away.

After having spent time with many of Bose’s products — speakers, soundbars, headphones, and earbuds, –I’m convinced there’s a “Bose sound.” At its core, it’s a nice balance of frequencies — not quite the “flat” or neutral sound that some audiophiles crave, but close. Bass is never absent from the formula, but nor does it trample its way through songs like an elephant wearing combat boots. And at the high end, there’s this extra hit of energy, a brightness that teeters on the edge of being sharp, but never makes you flinch. In short, the Bose sound is really enjoyable and lends itself to all but the most bass-heavy genres. And the QC 45 typify the Bose sound.

That’s great news if you like the way they sound, but if you don’t, the company doesn’t have much sympathy for you. There’s no way to adjust any aspect of the QC 45’s EQ in the Bose Music companion app, something you can do with the NC 700 and the company’s wireless speakers.

Bose fans already know just how good the company’s noise-canceling technology is. It’s the reason so many of them bought previous QuietComfort models. The QC 45 doesn’t set a new standard for ANC so much as it improves your ability to use it, which is arguably more important. You still get that same delightful hush as the cans filter out unwanted sounds, but now you can flip back and forth between full ANC and full transparency (which Bose calls Aware mode) almost instantly using the action button on the left earcup.

Neither ANC nor transparency are quite as good as what you get with the the Bose NC 700, and the QC 45 lack the clever bells and whistles of Sony’s WH-1000XM4 like speech detection (which can automatically engage transparency mode when you start talking), but that doesn’t stop them from being a great set of noise-canceling cans.

The QC 45 are meant to have superior voice calling when compared to the QC35 II, thanks to the inclusion of a fourth microphone. That may be true, but they’re still not as good as the NC 700 for phone calls.

External sounds are effectively canceled, but the algorithm Bose uses to do that can sometimes interfere with your voice, especially when those outside sounds get particularly loud. When things are quieter, your callers will hear you with perfect clarity. However, whether in quiet or loud conditions, the QC 45 make it sound as though you’re standing two or three feet away from the microphone, which is unusual. This doesn’t impact clarity, but it has a tendency to rob your voice of the low-end frequencies that add warmth and resonance.

If calling matters a lot, pick the NC 700 instead, or the JBL Tour One, which have the best call quality of any full-size headphones I’ve tested.

Bose headphones have never broken any records for battery life, but the QC 45 outperform both the QC 35 II and the newer NC 700, with 24 hours of continuous use (versus 20 hours). A very good rapid-charge capability gives you three extra hours if you charge the headphones for 15 minutes.

Remaining battery life is announced when you switch them on, which is especially important if you’re about to head into a long Zoom call and you’re not sure if the battery will last. You can also keep tabs on the battery from the Bose Music app.

The Bose QuietComfort 45 take a proven formula and make some much-needed improvements like longer battery life, USB-C charging, and easier/faster control over ANC modes, but some folks might miss the features that Bose decided to drop.

If you’re not stressed about having to keep a MicroUSB charging cable on hand, and you value being able to access Google Assistant or Amazon Alexa from your headphones, you can save a few bucks and still get a great set of ANC headphones with the $299 QuietComfort 35 II.

If call quality is high on your list, be sure to check out the very good JBL Tour One. They’re not quite as comfy as the QC 45 and they don’t do as good a job with ANC, but they offer hands-free access to voice assistants. They also have better battery life.

If you can afford them, the Bose Noise Cancelling Headphones 700 boast a lot of the features that the QC 45 dropped, like voice assistants, variable ANC, EQ control, and excellent call quality.

Bose products are very well-built and the QuietComfort 45 is no exception. You should get many years of use from these cans, and even if the ear cushions wear out, you can easily buy a set of replacements. Because they lack any kind of official water-resistance rating, you should avoid getting them wet. Bose backs its powered products like the QC 45 with a one-year warranty.

Yes. The QC 45 are a worthy if small upgrade to Bose’s legendary QuietComfort headphones that make them even better travel and music companions.