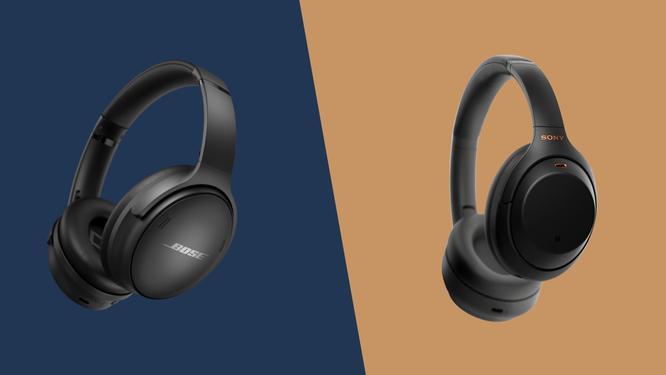 Bose QuietComfort 45 vs. Sony WH-1000XM4: Which noise-cancelling headphones are better?

Fresh off of its release, the Bose QuietComfort 45 has left a strong impression on critics, even making our list of the best noise-cancelling headphones. This latest addition to Bose’s popular over-ear headphone series packages strong ANC, 24 hours of battery life, and great audio quality in a familiar design. Bose Music app support has even been added to customize functions and settings.

The Sony WH-1000XM4 has remained one of the most highly coveted ANC models for the past year. It blends excellent sound, long battery life, cool wireless features, and a variety of sound technologies into a luxe design. Sony’s ANC technology is no slouch either, rivaling most models in the category.

Should you be torn over which to buy, check out our Bose QuietComfort 45 vs. Sony WH-1000XM4 comparison to get the full lowdown.

Bose usually sells their headphones at a higher price than Sony. However, the company is selling its latest creation for $329, which is lower than what the QuietComfort 35 II ($350) launched at. You can purchase it in two colors: Black and Smoke White.

Sony originally released the WH-1000XM4 at $349, though we’ve seen the headphones on sale several times over the past few months. Some retailers have even sold it for as low as $248, and we are expecting the model to be part of this year’s Best Black Friday deals. The WH-1000XM4 comes in Black, Midnight Blue, or Silver.

Based on features alone, the WH-1000XM4 gets you more bang for your buck.

Sony has built some of the most attractive headphones on the market and the WH-1000XM4 is no exception. Despite both models flaunting minimalist designs, Sony gives their wireless headphones a bit more flair, as highlighted by eye-grabbing details like the copper accents, embossed logo, and rubberized matte finish. Refined leather and plush padding provides the WH-1000XM4 great comfort, granted the extra weight becomes fatiguing after 2 hours of wear.

You have to give the QC45 a long, hard look to differentiate it from the previous version. Very little has changed. These headphones come with the same glass-filled nylon, synthetic leather, and impact-resistant materials. Button placement remains untouched. The only real changes are the laser-etched logo and headband covering, which is leather instead of suede. Luckily, the QC45 is as lightweight and cozy as the QC35 II, so you’ll be able to enjoy music for long stretches. We just prefer the WH-1000XM4’s classier appearance. 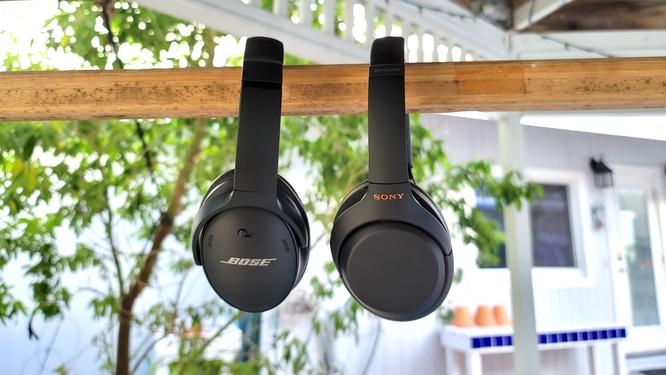 Bose had a chance to get creative with the QC45’s control scheme, but they chose to leave it as is. What you get are physical buttons to enable functions, but this time around, the Action Button can only be used to activate ANC mode; the QC35 II lets you assign the native assistive. Google Assistant, Siri, and Bixby are all compatible on these headphones and perform well.

Not only did Sony improve the touch controls on its flagship headphones, but they also added more of them for seamless operation. The touch panels register tap and swipe gestures with ease, while the buttons produce solid tactility to ensure assigned functions are being executed. It only gets better from here. Voice activation lets you fire up either Alexa or Google Assistant by saying either’s respective wake word function; Siri can be manually enabled when connected to an iOS/macOS device. Quick Attention will automatically pause music whenever placing your hand over the right earcup, and Speak-to-Chat uses the mics and advanced signal processing to hear your voice and perform the same action. Both features work well.

At one point, the WH-1000XM4 came a close second to the 700 Headphones for best noise cancellation, but Bose proved that they are their only true competitor, as demonstrated by the QC45. The engineers did a phenomenal job of stuffing six mics into the earcups and shifting their placement for optimal ANC. The results speak for themselves, silencing about 90% of ambient noise across different frequencies.

Sony worked diligently on improving their noise-cancelling technology and it shows in the WH-1000XM4, though the QC45 is the better neutralizer. Still, you’ll get some superb noise reduction out of Sony’s cans. The default ANC mode blocks out close to 90% of external sounds and you can use the NC Optimizer to measure and tailor ANC to your hearing. Atmospheric Pressure Optimization is also available to adjust pressure based on altitude and tweak noise cancellation on the fly. If only the WH-1000XM4 handled wind better.

Each of these headphones come with ambient-listening modes, which are equally great. The QC45 requires you to enable Aware Mode to pipe in whatever noises are around you, while Sony gives you 20 adjustable levels of ambient sound to play with. You’d be surprised to hear that Bose’s one mode almost matches Sony’s highest ambient level.

Sony pulled out all the stops when assembling the WH-1000XM4. Underneath the hood lies 40mm drivers that create a wide soundstage for impactful lows, crisp mids, and detailed highs that shine. Sound falls more towards the warm end, but you can tweak it through the Equalizer in the companion app. Here is where you can create your own sound profile by manually adjusting frequencies or pick from several high-performance presets. LDAC codec support was added, using lossless and lossy compression to achieve high-res audio, while technologies like DSEE Extreme and Edge-AI enhance fidelity lost on digitally compressed tracks. Oh yeah, we can’t forget 360 Reality Audio, Sony’s version of spatial audio that brings 3D effects to music.

We give the QC45 credit for attempting to put up a fight against Sony’s sonic beast. Proprietary TriPort acoustic architecture and a volume-optimized Active EQ were put in place to balance out frequencies for fuller, more precise sound. The soundstage does emphasize bass a bit too much, which diminishes quality on orchestral recordings.

The Sony Headphones Connect is probably the most feature-laden companion app out there. It’s loaded with different ways to customize sound and usability. We already mentioned hallmark features like the ANC, Ambient Sound Control, EQ with multiple presets, DSEE Extreme, NC Optimizer, Quick Attention, Speak-to-Chat, and 360 Reality Audio. You can prioritize sound quality over connection and vice-versa. Google Fast Pair and NFC make it effortless to connect the headphones with Android devices. Lastly, you have multipoint technology to pair the WH-1000XM4 with two devices simultaneously, while taking advantage of strong connectivity with a max range of up to 40 feet.

Bose did the smart thing by making the QC45 compatible with the Bose Music app. Unfortunately, they didn’t give the headphones much to work with. There is a Self-Voice mode that comes in handy to hear your voice more naturally on calls. The other big feature is SimpleSync to connect the headphones with a Bose Smart Soundbar and have it double as a remote to control volume when watching TV. Aside from those two, ANC and transparency mode are the QC45’s only other big features. Bluetooth 5.1 is programmed into the headphones, producing long range (50 feet) and quick connectivity.

Battery life on the WH-1000XM4 is the same as its predecessor, getting you 30 hours of ANC playtime and 38 hours when disabling the feature. As much as we appreciate Bose giving the QC45 the longest battery life of any Bose ANC model, 24 hours on a full charge doesn’t compare to what Sony offers. Not being able to turn off ANC on the QC45 hurts as well. The WH-1000XM4 also comes with more powerful quick-charging, generating 5 hours on a 10-minute charge versus the QC45’s 3 hours on a 15-minute charge.

The same way Sony knows sound, Bose knows call quality. While a step down from the excellent 700 Headphones, the QC45 is a highly serviceable calling headset that produces loud and clear results, as long as you’re not making calls in gusty conditions. In common areas like the backyard and inside the house, the headphones neutralized external sounds and picked up vocals very well.

The WH-1000XM4 is a slight improvement over the WH-1000XM3, but that isn’t saying much when there are still muffling issues and poor wind resistance to deal with.

The WH-1000XM4 has too much audio power for the QC45 to compete with. Let’s revisit the spec sheet. Monstrous 40mm drivers, EQ customization, spatial audio, LDAC support, and other upscaling technologies bless these headphones with category-leading sound. All the controls are on point, the design is sleek, noise cancellation is highly effective, and battery life is sufficient for at least two weeks of moderate use or an international flight across the globe.

We are fans of the QC45. These ANC headphones are a fine upgrade for the series and one that fans of the brand should strongly consider picking up once they’re ready to upgrade from their QC35 II unit. Sound is satisfying with rich bass at the forefront. Even the boosted battery life is appreciated. ANC is also up there with the 700 Headphones. There just aren’t enough features to justify its purchase over Sony’s offering.