Chargie is a device that aims to be even smarter than Apple’s Optimized Battery Charging feature, and to bring the same benefits to other battery-powered products you own.

Apple started introducing smarter charging features from iOS 13, and has since rolled out the intelligent battery management process to AirPods and Macs – but more is possible…

iPhones, iPads, Macs and most other gadgets use lithium-ion batteries. The benefit of li-ion is that it’s highly efficient, packing a lot of power into a small space. The drawback is that these batteries need careful charge-management to give them the longest possible life.

Lithium-ion batteries can be damaged in one of two ways. The first is completely depleting them. If you frequently run a battery down to zero power, that will significantly shorten its life.

The second is by keeping them at 100% for a long time – which is something that will easily happen if a device is left on charge for extended periods.

This is enabled by default. The iPhone learns your daily routine and predicts how long the iPhone will be on the charger when you go to bed overnight. After a few weeks, it will learn that you consistently wake up and take your iPhone off charge at 8 AM, for example.

With this prediction of daily behavior, Optimized Battery Charging prevents your phone from fully charging to 100% as soon as you plug it in. Instead, the iPhone battery will charge to about 80%. This means it will stay at around 80% for most of the night, even though it is connected to the charger the whole time. Just before 8 AM, the iPhone will then finish charging and should hit 100% just as you take it off the charger to get on with your day. 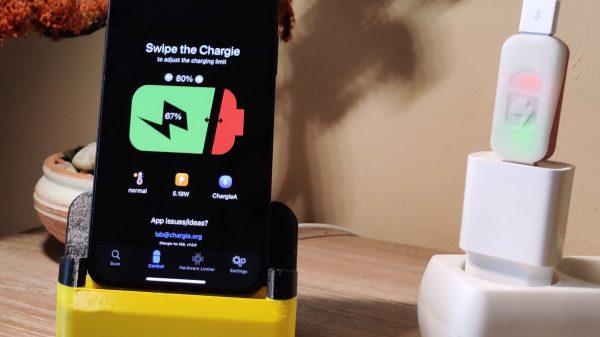 While this is a great starting point, it’s a fully automatic process, without any flexibility. It works fine if you have a consistent schedule, especially if you charge your phone overnight, but that isn’t the case for everyone. Some people have their phone on charge at their desk, for example, taking it with them for internal or external meetings on a variable schedule.

This is where Chargie comes in.

Chargie is a small device you fit between your charger’s power brick and your charger cable.

It links by Bluetooth to an app on your phone. You can then set the percentage you want to charge to manually, just like the feature offered in high-end electric cars like Teslas.

Or you can schedule your device to be topped up manually, at a time you know precisely. For example, you can keep your phone at 50% throughout the night (much better for the battery) and top it up to 90% or whatever level you find suited for the next day, thus completely avoiding high charging states and using the two-step charging process. Even if you need 100%, it’s much better doing it this way than plainly keeping it charged at that level for the entire night.

Because the newest PD chargers can put out a whopping 65 watts of instant power you probably noticed your phone usually heats up during the charging process and that is causing internal damageto the battery over time. Moreover, the current is lowered when the battery is warmer. The new Chargie C Basic (for phones) deals with your PD charger and tells it to hold its horses to some 8 watts only, so that your battery doesn’t get hot and the time it takes to charge is not prolonged by much compared to high-power charging, just because the process doesn’t get throttled by iOS due to overheating.

Chargie for the Mac

Ovidiu Sandru, the founder and inventor of the Chargie project, said they’re also working on a MacBook version of Chargie that will switch up to 100 watts of power and that protects your very expensive laptop’s battery in the same way it does for phones. The waiting line will probably be huge on this one, so reserve your seat as soon as possible. If you want Chargie C for Laptops, there is a $10 reservation fee per order (non-refundable, deductible at order time with a coupon), with deliveries to start sometime in March. The final price is estimated at $45. Your MacBook’s battery deserves the best protection you can get it, especially if you keep it plugged in all day long.

Not only can you protect smartphone batteries with this gadget, but all sorts of other “dumb” devices you may have: flashlights, older GPS navigators, Bluetooth speakers, wireless headphones, smartwatches, and more. Most of them have no smart charging limits at all and can spend days or even weeks with batteries that are 100% charged, which leads to much lower battery life. Chargie can also be used with basic lithium-ion applications created by hobbyists and makers.

Chargie protects the environment, as well as your wallet

By extending the usable life of your battery, Chargie saves you the hassle and expense of replacing it prematurely.

That doesn’t just save you money, though – it also helps the environment. Batteries use rare minerals which need to be mined, and also create an e-waste problem when it is time to dispose of them. Chargie reduces or eliminates battery replacements, so is kind to the planet.

Chargie is also manufactured in an environmentally responsible way. The process is lead-free, and both the circuits and contacts are gold-plated to protect against oxidisation, prolonging the life of the device itself as well as your smartphone.

Chargie A costs just $29.99, and you can use it with any of your existing chargers and charging cables. It’s compatible with any USB-A charger, with the brand new USB-C version available here.

Use the code ‘chargieforios’ for a 10% discount, only this week! Bulk purchases are also available at better prices per unit, which makes Chargie the best Christmas gift for your loved ones’ Apple devices. Read more about Chargie on the company’s website.