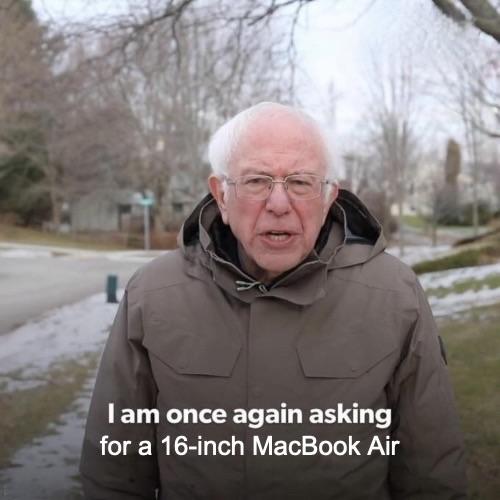 Unlike the MacBook Pro, the MacBook Air is available in a single 13-inch form factor. There are rumors of a major MacBook Air redesign coming this year, but those rumors don’t indicate that the screen size will get bigger or smaller with that redesign.

That leaves me here, once again, asking for Apple to consider making a MacBook Air in a larger form factor. And for that matter, make a smaller one too.

I am once again asking for a 16-inch MacBook Air

If there was ever a time for Apple to shake up the MacBook Air form factor, it seems like now is that time. We’re in the midst of the transition from Intel to Apple Silicon processors, which has allowed Apple to dramatically redesign and improve products such as the 24-inch iMac and MacBook Pro.

Rumors indicate that Apple is planning a new MacBook Air design for some time this year. This update will purportedly bring new color options, a flat-edged design without a taper, white bezels, and more. If all of the rumors come to fruition, this will represent the largest redesign in the history of the MacBook Air. But one thing won’t change: the 13-inch display size.

I’m far from the first person to say Apple should make a larger MacBook Air. Way back in 2016, my colleague Zac Hall argued that a 15-inch MacBook Air would be his “dream MacBook.” (That story was actually based on a tweet from Zac in 2012, so he’s been on this bandwagon for over a decade) 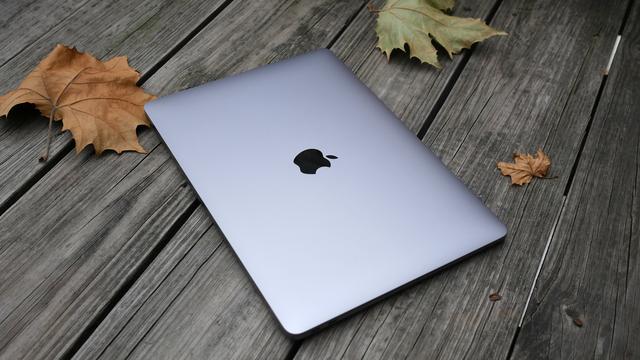 In my eyes, this larger MacBook Air would be identical to the 13-inch model in every way, but with a larger display. It would put an emphasis on the thin-and-light form factor, taking the 13-inch thin-and-light design and scaling it to 16-inches. It wouldn’t need to be any more powerful. Just give me the MacBook Air with a 16-inch display and a larger battery to offset the impact of that larger display.

This would be the ultimate portable MacBook for me, and probably many other people. The 16-inch MacBook Pro is a great machine, but weighing in at 4.8 pounds means it’s noticeable in your backpack. If you need the power that the 16-inch MacBook Pro brings, then it’s a great option. My situation, however, means that I don’t need that power, but I would like the 16-inches of screen real estate.

And again, if you want a 16-inch display, the MacBook Pro is your only option and the base configuration there starts at a whopping $2,499.

In an ideal world, Apple could slot a 16-inch MacBook Air into the lineup around the ~$1,500 price point. With an M2 chip, two USB-C ports, and multiple colors from which to choose, it would surely sell like hotcakes.

As an aside: I probably wouldn’t buy it, but with the advent of Apple Silicon and the associated power/efficiency improvements, now seems like a good time for Apple to revisit the possibility of bringing back the 11-inch MacBook Air form factor as well. Essentially a modern, yet more compact twist on the 12-inch MacBook that came out in 2015.

Unfortunately, this is all just me wish casting at this point. There are no rumors that Apple is actually planning a larger MacBook Air. All indications are that we can expect a new 13-inch MacBook Air and entry-level MacBook Pro this year, but no other major changes to the MacBook lineup.

Would you be interested in a 16-inch MacBook Air if Apple were to offer one? Let us know down in the comments.