Home Article How to improve your Mac's security and privacy 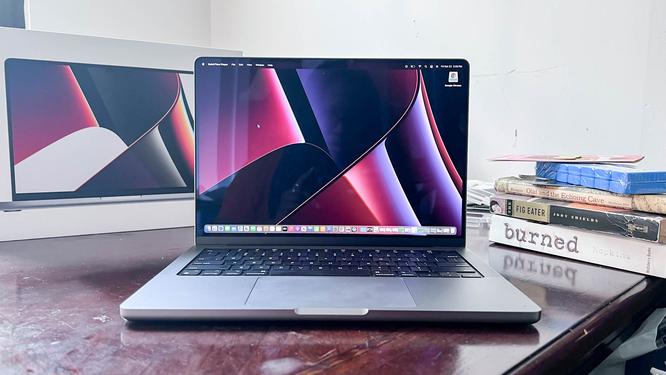 Your Mac offers plenty of security by default. It doesn’t cover all the corners, though, and with the rise of cyberattacks, there’s no such thing as being too prepared, especially when your privacy is on the line. Fortunately, you can patch the holes macOS’s built-in protections leave with a couple of third-party apps.

You can establish all sorts of safeguards with apps to secure your Mac further. From monitoring your network for suspicious activities to preventing ransomware attacks before they happen, such apps can defend you from even the sneakiest of malware. Here are the best security apps you must install on your Mac.

Configure your Mac for maximum security

Before you ramp up your Mac’s firewall with third-party apps, it’s well worth taking a trip down to System Preferences and checking if you have missed activating any of macOS’s built-in protections. To do this, you don’t have to go through each setting one by one either.Pareto Securitywill do it for you.

Pareto Security is a premium utility that reviews your Mac’s configuration and lets you check the status of its essential security options. It tells you whether macOS’s native safeguards like Gatekeeper — a module that verifies all downloaded software is signed by the App Store or a registered developer — are on, apps are up to date, your files aren’t set to public access, and more.

Pareto Security doesn’t have a free trial and costs a one-time $17 fee. 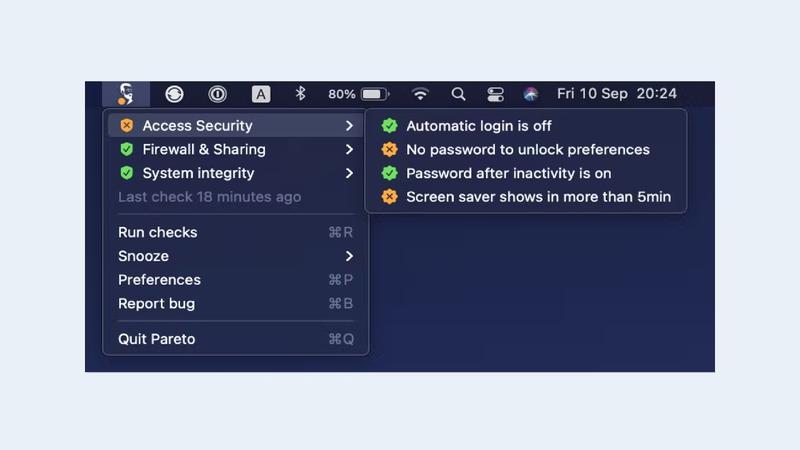 When your Mac is online, your apps transmit whatever information they wish to with a host of servers behind the scenes. Usually, they do so at your request, such as when you’re browsing the web or downloading a system update. But if an app goes rogue, it would continue to connect to the internet, compromising your data, and you’ll never know about it. An app calledLittle Snitchmakes sure you’re never caught off guard.

Little Snitch lets you keep an eye on every packet of data leaving your computer. It lists every connection your apps are linked to at the moment, the amount of data they’re sending and receiving, and where in the world their servers are located. In case you spot an activity you don’t remember authorizing, you can instantly shut off its internet access with a click.

Little Snitch has a bunch of tools you may find handy. You can enable an “Alert Mode,” where no app is allowed to get online unless you explicitly allow it to. In addition, it lets you configure special preferences for different Wi-Fi networks. Little Snitch offers a 30-day trial, after which you’ll have to pay $30.

When you enter an address in your browser, it triggers a fundamental internet block called the DNS — often referred to as the web’s phonebook — to convert that string of characters (for example, laptopmag.com) into a computer-readable language (151.101.66.114). Although the DNS eliminates the need for you to remember such complex numbers, it’s also one of the most vulnerable links in your privacy chain.

You see, malicious actors and your service provider can snoop on your DNS history to track which websites you’re browsing and misuse that information to target you with ads. Even worse, they can sell it to the highest bidder. Plus, the DNS your service provider offers is likely to be of poor quality, which means it’s slow to respond and equipped with lax security protections.

Cloudflare’s free 1.1.1.1 appreplaces your Internet connection’s default DNS with one that’s both more secure and faster. All you have to do is install it and toggle it on from the menu bar.

Protect your Mac from the biggest security threats

There are countless ways viruses and malware can sneak into your Mac, andObjective-See, a suite of free Mac security tools, can protect you from many of them.

Objective-See is developed by renowned security expert Patrick Wardle and includes nearly a dozen simple apps engineered to handle various common attacks. You don’t have to install all of them, of course, but a few can truly be a lifesaver in case your computer is ever in the crosshairs of a hacker.

The “RansomWhere?” app, for instance, looks out for Ransomware hacks, where a malicious process locks your personal files and then demands ransom if you want to retrieve them back. This app monitors your Mac’s file system for such activities and alerts you of them before it’s too late.

Another calledReiKeyscans and detects malware that can intercept your keystrokes and snoop on everything you type. Similarly, Objective-See's“Do Not Disturb” toolprevents anyone from hacking your Mac if you’ve left it idle in, for instance, a cafe or a communal workspace.

Shubham Agarwal is a freelance technology journalist from Ahmedabad, India. His work has previously appeared in Business Insider, Fast Company, HuffPost, and more. You can reach out to him on Twitter.

what is the best apple laptop