Home Article How to run Windows 10 on a Chromebook 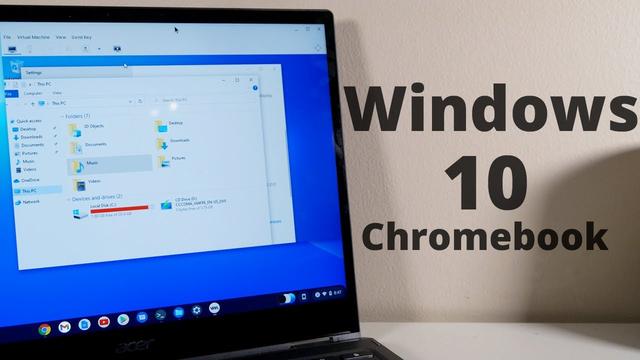 How to run Windows 10 on a Chromebook

If you recently made the switch from a Windows 10 PC to a Chromebook, you’re probably missing some of your favorite apps. It’s no secret that some Windows apps can’t run natively on Chrome OS. Users often miss their favorite productivity apps, creator tools, and games when making the switch. Luckily, there are options if you need to run Windows 10 on your Chromebook.

One of the most powerful methods to accomplish this is to install Parallels Desktop for Chrome OS. Note though this software is currently targeted at enterprise users, so individual licenses are not yet available. If you’re part of the target audience, this can be an amazing supplement to your Chrome OS workflow.

What is Parallels Desktop for Chrome OS?

Parallels Desktop is a full-featured Windows container that runs natively on Chrome OS. This software allows you to run the full version of Windows, but there are a few important things to be aware of.

The Parallels Desktop software is currently only available at scale to business customers, making this option of little use to individual users at the present time. With Parallels Desktop for Chrome OS, IT departments can enable proprietary and full-featured Windows applications — including native Microsoft Office — on Chrome OS devices, online and offline. You’ll need a Chrome Enterprise upgrade to run Parallels (see screenshot above).

Some key features of Parallels Desktop for Chrome OS include:

There are minimum system requirements to run Parallels on your Chromebook. You need at least Chrome OS version 85 or later. Additionally, you need the Google Admin console, Chrome Enterprise Upgrade/Chrome Education Upgrade, a Microsoft Windows ISO, a Windows license, and a storage server if you wish to distribute to multiple machines in your organization. In terms of hardware, supported processors include Intel Core i5 or i7 and AMD Ryzen 5 or 7. You’ll also need a minimum of 8 GB of RAM and 128 GB SSD local storage on your device.

While some of these specifications seem limiting, keep in mind this software is currently targeted at enterprise customers. There are many enterprise Chromebooks from Acer, HP, and Lenovo that meet the requirements. If your Chromebook or Chrome OS tablet meets the minimum requirements, you might also enjoy buying a docking station to turn your Chromebook into a full workstation.

Technically, you can upgrade to Chrome Enterprise on a supported Chromebook if you are an individual. All you need to do is purchase a website domain from a provider like Squarespace, then link it to a Google Workspace account. Both Google Workspace, Chrome Enterprise, and your domain will have associated costs, so this can be a very expensive approach if you don’t own an actual business.

The installation process for Parallels Desktop for Chrome OS requires a few key things before you start.

Before a user can sign into a Chromebook with your organization, the device must be enrolled into management. This also applies to the admin’s Chromebook, which will be used to create a Parallels Desktop Windows image.

Next, you need to activate your Parallels Desktop license. This is accomplished by visiting the link provided by Parallels support when you purchased your license. After you click the link, you’ll visit your Google Admin console to enable Parallels Desktop for your organization. Make sure you check the option to allow users to access Parallels Desktop, otherwise you’ll not be able to continue with the Windows 10 installation. 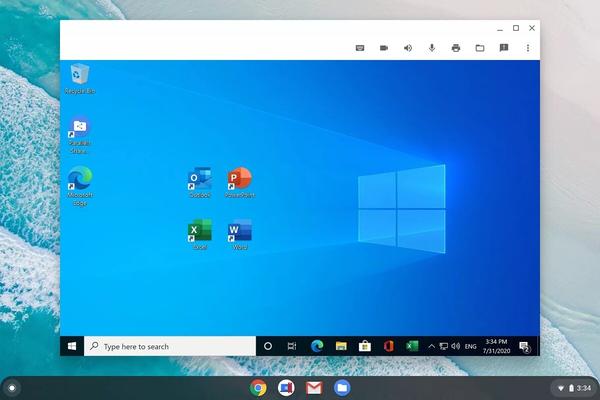 Finally you can run the Windows virtual machine on your admin machine, but first you need to create it. To do this, visit the crosh (Chrome developer shell) terminal by pressing Ctrl+Alt+t while in the Chrome browser. In the crosh terminal run the command:

Hereshould replaced with the name of your Windows image file stored in your Chromebook’s Downloads folder. This process takes a few minutes to complete and will name your virtual machine PvmDefault at the end. You can then run the VM by executing the command:

This will open the Windows 10 setup menu and you can install Windows as usual. Keep in mind you need a valid Windows license to complete this process. Make sure you also install Parallels Tools to take full advantage of all features.

After you set up Windows 10 on the VM, you need to export the image as a zip file for other users (including yourself) to run Parallels Desktop from the Chrome OS launcher. To do this, run the command:

You can replace ‘Windows10.zip’ with whatever you want to name your file. This process takes quite a while to complete and the zip file will be quite large. At the end of the process you must upload the file to a corporate server or Google Drive, then input the relevant URL and SHA-256 hash into the Google admin console.

After this, you should be able to click on the Parallels Desktop icon in the Chrome launcher and launch the setup process to download and install the zip file on your machine. From this point, Windows 10 should open naturally and you’re good to go. Additional users for your organization can repeat this process to use Windows 10 on their Chrome devices.

There were a few key issues I ran into when installing Windows 10 via Parallels on my Chromebook. The first issue appears to be a Chrome OS integration issue. When I first tried to create the Windows virtual machine on my administrator device, I received an error that the installation could not complete and a Chrome OS update was needed. I checked for updates, but there were no available updates for my device on the stable Chrome OS channel.

To see if I could force an update, I then switched my device to the Chrome OS Beta channel. That worked for me and I was able to update. Returning to the crosh command line, I was then able to run the create command and generate a Windows 10 virtual machine. From there, the installation process went relatively smoothly on the administrator side. Keep in mind that in order to switch to the Beta channel you need to allow permission for this in the Google Admin Console. Even administrators need to enable this permission manually to move to an alternate update channel.

After creating the virtual machine and installing Parallel Tools on my administrator Chromebook, I also noticed that my Windows file system was not sharing with Chrome OS. This is not ideal as you can’t move files between Windows and Chrome OS, something that Parallels advertises as a key feature. This is actually normal behavior, it just isn’t quite clear in the documentation that you need an extra step to enable this for administrators.

The administrator needs to download the Windows zip file from the corporate server or Google Drive to install Parallels fully on their own machine. You will not have the file sharing capability without doing this. To install Parallels on the admin laptop, simply click the Parallels icon in your Chrome OS launcher and the download will begin automatically. Now you have full sharing capabilities between Windows and Chrome OS.

Which Windows apps run on a Chromebook via Parallels?

There are some key advantages to this method. Most importantly, you retain all the power of the Microsoft apps. Some of the pro features, such as the Data Analysis ToolPak in Excel, are missing from the web app and Android app. Running Parallels on your Chromebook allows access to all the functionality only found in the desktop apps.

Most PC games should also run fine using Parallels, but keep in mind gaming quality will depend on the specs of your Chromebook. The good news is Parallels requires fairly beefy specs to install, so you should be able to play some games as well.

Not all functionality works exactly the same as a true Windows machine though. For instance, you can run the Windows version of iTunes more smoothly using Parallels. However, you lose the ability to sync an iPhone or iPod. This is an important caveat to keep in mind. Even though you can run Windows on your Chromebook with Parallels, the device doesn’t always behave like a PC.

It turns out you can indeed run Windows 10 on any of the top Chromebooks, provided you’re an enterprise or education customer or are willing to pay for a Google Workspace and Enterprise upgrade, attached to a website domain you personally own. If you’re willing to buy Parallels Desktop for Chrome OS, the full power of Windows comes to your Chromebook. For those who want to get started trying Parallels, hit the links in the boxes below. If you try out the Parallels software on your Chromebook, let us know how it goes in the comments section.

NOTE: We expect Parallels Desktop for Chrome OS will also support Windows 11 at some point in the near future. Windows 11 was only recently announced, so official support details were not available at the time of publication for this article. We’ll update this article or create a new tutorial when Windows 11 support is available for Chromebooks.