Home Article How to Turn Your Laptop Into a Typewriter 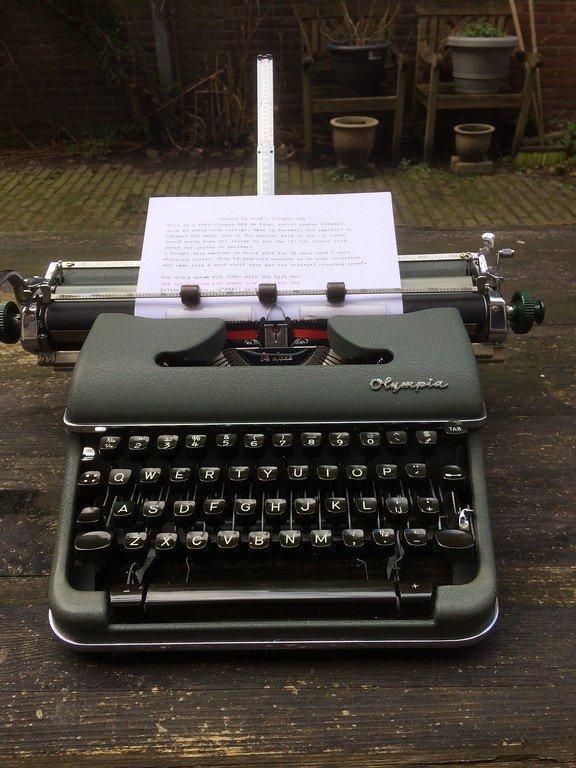 How to Turn Your Laptop Into a Typewriter

Writing requires focus: You need to sit down with your thoughts and just plow through your work. Regrettably, a modern computer isn’t that great for focusing on something as mundane as text. A word processor surrounds your text with so many flashy buttons and toolbars that you might sometimes feel as if the words you’re trying to write belong in the backseat. Then there’s the matter of chat pop-ups, email dings, Twitter chirps, and the entire panoply of modern distractions that conspire to steal your focus.

Although full-screen text editors such as WriteMonkey and WriteRoom eliminate most interface distractions, you are still just a single Alt-Tab away from a world of temptations and time-wasting activities (or “research”). So when you really want to get some writing done, sometimes a dedicated typewriter is what you need: You see no notifications, you can’t switch to other windows, and nothing comes between you and your text.

In this article, I will show you how to take an old laptop and convert it into a text-only typewriter with zero distractions, but with wireless connectivity to your home network, and seamless Dropbox synchronization for your text. This setup allows you to write on your typewriter, and then edit your work in a full-fledged word processor on your main computer (or on the same computer, booted into Windows).

Our typewriter will be based on Ubuntu Server. I know this sounds like overkill: Why take a server-grade operating system that supports enterprise hardware, and use it as a typewriter? I chose Ubuntu Server for three reasons: First, it’s strictly a console OS, so it has no X-Windows to disable. Also, it has a polished and well-tested setup routine, as well as robust hardware support. With any luck, you won’t have to tinker with drivers for Ubuntu Server to correctly identify and use all of your laptop’s hardware, and most important, its Wi-Fi interface.

Obviously, the first step is to get your hands on Ubuntu. Navigate to the Ubuntu Server download page; Ubuntu recommends going with the 64-bit build, but for our purposes, the 32-bit version works better because it supports older hardware. Change the drop-down to say 32-bit, and click the big red Start download button. Once you have the file, use it to make a bootable disk. To do so, on the same page, go to step 2 and select the option to create a bootable CD or USB stick (I chose the latter). Follow the detailed instructions on the page, and you should end up with a CD or USB stick that you can use to install Ubuntu Server on your laptop.

Installing Ubuntu Server is pretty simple, but it isn’t a mindless process: Although the text-only installer is clear, you still have to read each screen and understand what you’re doing. First, insert your media of choice; for the purposes of this guide, put the CD you’ve burned into the laptop, or plug in the USB drive you prepared in the previous step. Next, configure your laptop to boot from either USB or CD (whichever is more apropos). How you accomplish this step depends on the laptop you own; on my Toshiba laptop, I had to press F2 as the computer was booting, enter the BIOS, and go to the Boot tab. There, I changed the boot sequence so that ‘USB Flash Disk’ was first. Consult your laptop manual or manufacturer’s website for more information.

Time to start the installation process. Once the laptop boots from your CD or USB stick, you will see a text menu with the Ubuntu logo. Pick the second option: Install Ubuntu on a Hard Disk. Move forward through the setup process by selecting your language, your country, and your keyboard layout.

Next, it’s time to configure the Wi-Fi adapter. Ubuntu should almost always correctly identify your network adapters and let you choose either the wired or wireless one. The wireless one is usually called ‘wlan0’. Select it, and then manually type the name of the network to which you wish to connect, as well as its access password. Both the name and the password are case-sensitive. You will also have to pick a host name for your computer; I went with ‘typewriter’.

You will have to make room for Ubuntu, which probably entails resizing your laptop’s hard-drive partitions. Choose the first option, Guided – resize. Confirm writing changes to disk, select a maximum size, and let Ubuntu resize the partition. This procedure will take a long time (around 20 minutes, for me). Next, configure your user credentials by entering your full name, a username, and a password.

Once that’s done, let Ubuntu proceed with updates. It will download packages off the Internet, and eventually it will ask you about what software you wish to install. Leave everything unchecked–you don’t want to install anything other than the bare-bones setup. Make sure to install the GRUB boot loader, as this will let you actually boot into Ubuntu.

If everything completes successfully, congratulations! You’re done installing Ubuntu. Pull out the USB key, or eject the CD. Once you reboot the computer, you will see the GRUB selection screen. Choose the first option (Ubuntu); this selection will boot the machine into your new operating system.

Now that you have Ubuntu ready, you’re going to set up Dropbox integration. This step is the trickiest part of this how-to, and it involves quite a bit of manual typing. The process is based on the excellent tutorial by Ubuntu Server GUI, with a few minor changes.

1. Log in: Enter your new Ubuntu Server installation by using the username and password you chose during setup. Your laptop should be automatically connected to the Internet (assuming that you are on the same Wi-Fi network you configured during setup).

Note that Dropbox offers 32-bit and 64-bit packages. You’re installing the 32-bit one (because you installed the 32-bit Ubuntu Server edition).

4. Start the Dropbox daemon: This is a tricky part of the process, requiring a second computer and some accurate typing. Enter the following line.

Now comes the tricky part. The daemon will start running, but it will merely tell you that it isn’t linked to an account yet. It will repeatedly output a message that looks similar to the lines below:

Keep it running and outputting this message, and move to the next step.

5. Manually copy the URL: On a separate machine, one with a Web browser, go to the Dropbox website and log in to your account. Next, you will have to manually type the entire URL you see on your laptop into the browser on this other machine. Yes–the whole thing, long argument and all. If you’re having trouble copying it accurately, ask a friend to dictate it to you.

Assuming that you got it right, the Dropbox website will request your password again, and then the message on your laptop will change to say: 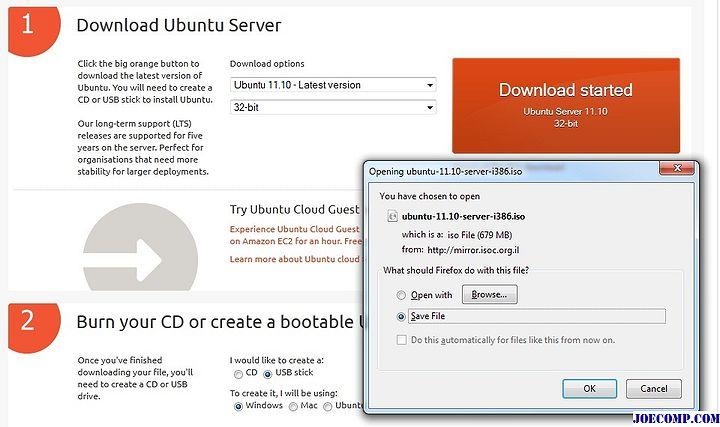 (It would probably not call you Erez, of course.) You may now press Ctrl-C to stop the daemon, and continue to the next step.

6. Get dropbox.py: To make working with Dropbox easier, download Dropbox’s helper Python script into the .dropbox folder, and make it executable by typing the following lines.

8. Exclude all folders: Since we are using this laptop as a simple typewriter, let’s exclude all Dropbox folders so that they don’t sync to this laptop and clutter it up.

You should now see an animated prompt that looks like […] while Dropbox works to exclude the folders. This process will take a few moments, at the end of which it should say:

Excluded:documentspictures[all of your other folders]

9. Create a new folder: Create a ‘typewriter’ folder to save your files in.

You should see this folder pop up on your main computer instantly, showing that Dropbox sync is indeed working.

Ubuntu is installed, and Dropbox is configured–you’re almost done. Now it is time to control what happens when you turn the computer on, so that you can simply start writing after turning the computer on. After all, a typewriter never asks you for your password.

First, you need to edit the .bashrc file to make Dropbox and a text editor start on boot. The Dropbox.py script contains an autostart option, but this did not work on my Ubuntu Server installation; if you have the same trouble, try my workaround by editing the .bashrc file as follows.

Within the .bashrc file, scroll all the way to the end, and type the following lines.

The first line starts Dropbox, the second one switches to the ‘typewriter’ Dropbox folder, and the third starts a text editor. You can also use Vim if you’re more comfortable with that, of course.

Now let’s test to make sure this setup works. Reboot your computer by typing the following line.

Enter your password if prompted, and your computer should reboot. Log in to Ubuntu again, and you should find yourself in a text editor, ready to write. You can test whether Dropbox is working by saving a file and seeing it pop up on your other computer in a moment. Now, let’s configure automatic login. Exit Nano by pressing Ctrl-X, and type the following line.

Again, type your password if requested. You are now editing a configuration file, the last line of which starts with an ‘exec’ command. Replace that line with:

Where USERNAME is your own username, of course. Be sure to type this line accurately. Then save the file (Ctrl-O) and exit (Ctrl-X).

Now, let’s test again to make sure everything is working correctly. Reboot the computer to see if automatic login works:

Your computer should now restart, load Ubuntu, log you in, and run your text editor within the Dropbox folder. Once you are done working on your text and want to shut down the computer, exit the text editor and type the following into the command prompt:

That’s it: You can now work on your text in a truly distraction-free environment, save it, and instantly retrieve it from another computer for further editing. Just don’t forget to turn off your smartphone while writing.