HP recently announced the Elite Dragonfly G3, the latest in its lineup of premium business laptops. This new version makes a few big changes, notably including a 3:2 display, while doing away with the convertible form factor. These changes make the Elite Dragonfly G3 more similar to HP’s Spectre x360 14 in regards to the display, but more different in terms of form factor, since the Spectre x360 is a convertible.

The Spectre x360 14 is one of HP’s best laptops, and the Elite Dragonfly family has also earned its place on that list. So, with these new changes, which one should you choose? We’re here to help you find out. Right off the bat, we’ll point out that the Spectre x360 14 has yet to be refreshed with Intel’s 12th-generation processors, so the Elite Dragonfly G3 certainly has an advantage on that front. Regardless, let’s dive into the differences between the two laptops.

With the basic specs out of the way, let’s dive right into the comparison. We’ll leave performance for last since there’s a lot we don’t know yet regarding Intel’s new processors.

Display: The same, but different

It’s not often that we get to compare two displays that are so close to each other in terms of specs, but HP has truly made the Elite Dragonfly G3 nearly identical to the Spectre x360. Both laptops have a 13.5-inch display that comes in the 3:2 aspect ratio. This taller screen is great for productivity, and both of these laptops actually represent the first time a 3:2 display was used in their respective lineups. The extra vertical space can be helpful since it makes more space for text on a page, or for UI elements in media editing apps that tend to have a lot of tools visible at once.

The configurations are also nearly identical across the two laptops: The base model comes with a Full HD+ (1920 x 1280) panel and 400 nits of brightness, and you can add an HP Sure View Reflect privacy screen. Otherwise, you can upgrade to the 3K2K OLED model if you want a sharper panel along with the benefits of an OLED panel, including true blacks and higher contrast. The difference is that because the HP Spectre x360 14 is a convertible, all the configurations have a touchscreen, while the Elite Dragonfly G3 only offers touch support in the OLED model.

On the other hand, the HP Elite Dragonfly G3 crushes the Spectre x360 14 in terms of camera quality. It comes with a new 5MP camera with high-resolution video, plus it has smart features like auto framing for video calls. The Spectre x360 14, unfortunately, uses a 720p camera and on top of that, it’s a tiny 2.2mm sensor. It can’t capture a lot of light, so image quality can be grainy even in decent lighting conditions. 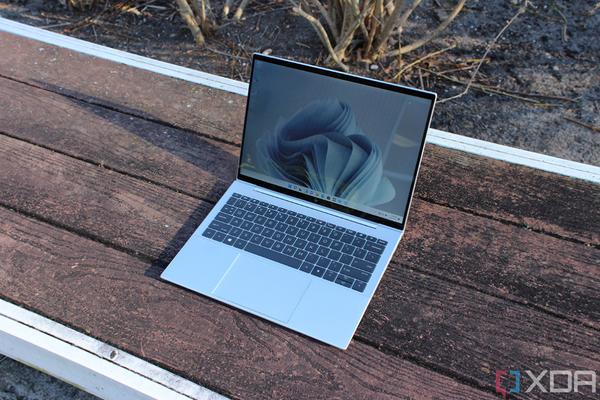 Design and ports: The HP Spectre x360 14 is stunning

Unlike the display, the design of these two laptops is very different. The HP Elite Dragonfly G3 has a traditional clamshell form factor, and it comes in two fairly basic color options: Natural Silver and Slate Blue, with the latter being practically black. It doesn’t look quite as unique as previous Dragonfly models, and it’s arguably a bit bland. What it does right, however, is portability. The Elite Dragonfly G3 starts at just 2.2lbs of weight, less than one kilogram, so it’s very easy to carry around anywhere you want to go.

On the other hand, the HP Spectre x360 14 is an absolutely beautiful laptop. It comes in three color options: Natural Silver, Nightfall Black, and Poseidon Blue. The silver model is also fairly simple, but the other two use a stunning dual-tone, with the Nightfall Black model having copper accents and the Poseidon Blue using gold-colored accents instead. These designs look premium without being boring, which I personally prefer. However, the Spectre x360 14 starts at 2.95lbs, so it’s quite a bit heavier than the Elite Dragonfly G3. That’s because the chassis is made from aluminum instead of a magnesium alloy, but even though it’s heavier, it should still be decently portable.

Of course, there’s also the matter of versatility, where the HP Spectre x360 comes out on top. being a convertible means you can use it as a tablet and in a variety of different positions for different use cases. HP decided to turn the Elite Dragonfly G3 into a typical clamshell laptop, even though previous models were also convertible. Even if you don’t necessarily use your PC as a tablet that often, it’s nice to have the option.

As for connectivity, this is one area where the Elite Dragonfly G3 is a bit better, and that’s what you should expect from a business laptop. It comes with two Thunderbolt 4 ports, one USB Type-A port, HDMI, and a headphone jack. If you choose to add cellular connectivity to the laptop, you also get a nano SIM card slot.

The HP Spectre x360 isn’t too far off; however, it lacks HDMI output and you can’t add cellular connectivity to it. On the flip side, it has a microSD card reader, which you don’t get with the Elite Dragonfly G3. We’d argue HDMI is more useful, but you can always use a USB Type-C adapter or a Thunderbolt dock to add display output to the Spectre x360 14 if you want to.

On the inside, these two laptops are quite different because, as we’ve mentioned, the Elite Dragonfly G3 comes with Intel’s 12th-generation “Alder Lake” processors, which the Spectre line isn’t using yet. These new processors use a hybrid architecture, meaning they have some high-performance cores and some power-efficient cores. HP hasn’t specifically said what processors it’s using in the Dragonfly G3, but if they’re from the U series (as they’ve been in the past), they should have up to 10 cores – two performance cores, eight efficient ones – for a total of 12 threads. The performance cores can boost up to 4.8GHz, and the efficient cores can boost up to 3.6GHz. Meanwhile, the Spectre x360 14 maxes out with an 11th-generation Intel Core i7-1195G7, which has four cores, eight threads, and can boost up to 5GHz.

We don’t know much about the performance of Intel’s 12th-generation processors yet, though it’s fair to expect they’ll be faster than the previous generation. As such, the Elite Dragonfly G3 should be faster than the Spectre x360 14, but we don’t know by how much. As for graphics, the two laptops shouldn’t be too far off, since they both feature Intel Iris Xe graphics with up to 96 execution units.

Whether you prefer the HP Spectre x360 14 or the Elite Dragonfly G3 is ultimately up to what features you need and what design you prefer. Of course, the Elite Dragonfly G3 has an obvious performance advantage, but it’s not like the Spectre x360 will be slow by any means. Plus, we’re bound to see a refresh of that model sometime soon, so you can just wait it out if that’s your biggest concern.

Most of the differences here are in terms of design and form factor, and those are very subjective. The HP Elite Dragonfly G3 is significantly lighter than the Spectre x360 14, and that makes it ideal if you want a laptop you can take with you anywhere to get work done. It also has a more subdued look, which some might consider boring, but you might appreciate it if you want something discreet and professional. It does have some real benefits over the Spectre, though, like including HDMI and the possibility to add a cellular connection.

On the other hand, the Spectre x360 14 is heavier, but it’s a convertible, so you get a touchscreen in every configuration, and it’s just more versatile overall. You can use it as a tablet, in tent mode, or as a standard laptop. Plus, it looks stunning in its Nightfall Black and Poseidon Blue models – it might be a bit flashier, but it’s still very classy and premium. It also has a microSD card reader, which isn’t available on the Elite Dragonfly.

Personally speaking, I find the HP Spectre x360 14 far more interesting because of its form factor. I love convertibles, and it makes no sense to me to buy a typical clamshell laptop. But features like cellular connectivity or the HDMI port might sway things in favor of the Elite Dragonfly for some users.

The HP Elite Dragonfly G3 is expected to launch in March, so if that’s your preference, you’ll need to wait a little longer. You can buy the Spectre x360 14 below, but if you can afford to wait, it might be worth waiting to see if HP announces an upgrade version of it soon. If you want to explore other options, check out our list of the best laptops you can buy right now.