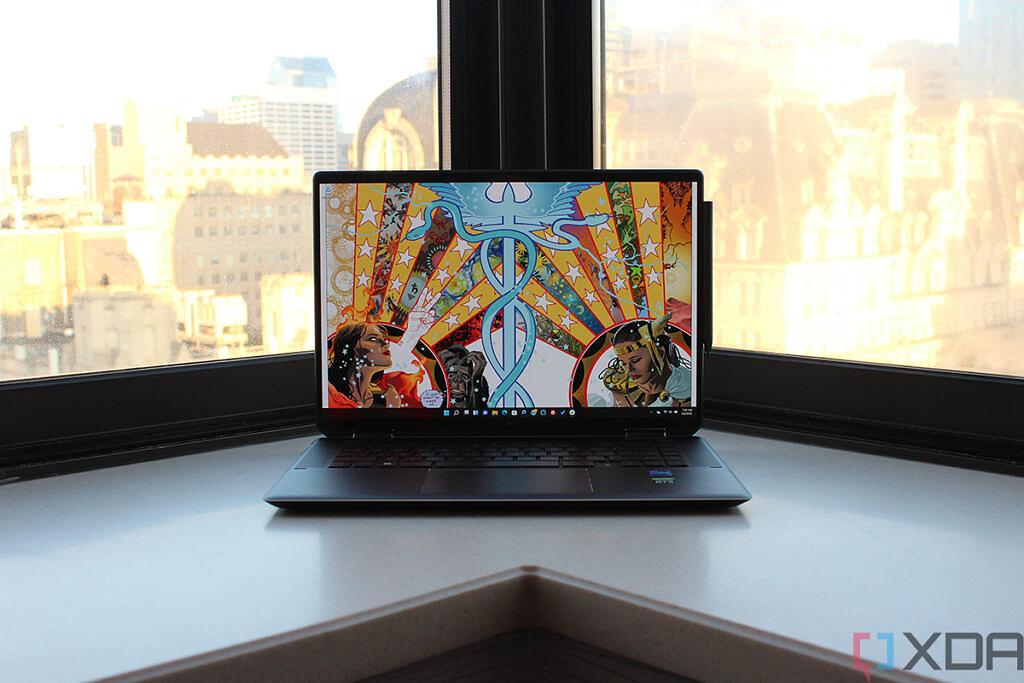 The last time we looked at one of HP's premium Spectre x360 convertible notebooks, we were blown away by its style, powerful hardware and excellent keyboard. But that was just a 13-inch model — what if HP took all of that goodness and put it in a massive 16-inch laptop? That's basically what the company is offering with its new Spectre x360 16. It's big. It's beautiful. And this time, it comes equipped with NVIDIA's new RTX 3050 GPU. If you're looking for a notebook with a large screen that can also handle a bit of gaming and creative work, the x360 16 is a compelling option.

Strangely enough, HP doesn't really have much competition when it comes to powerful, large-screened convertibles. Dell hasn't updated the XPS 15 2-in-1 in years, and LG's comparable Grams strive for lightness more than power. It could be that other companies were scared away by having heavy notebooks with rotating screens — the 4.4-pound x360 16 is downright hefty compared to the 3-pound 13-inch model. But it's not too far off from the 4.3-pound MacBook Pro 16. If you're looking for a large display, you've probably already relegated yourself to carrying around a heavy machine. (And at least it's lighter than the XPS 17, which clocks in at up to 5.5 pounds!)

Design wise, the Spectre x360 16 is more glam than Dell's minimalist XPS line. Both companies went for sleek, all-metal cases, but HP's hardware features metallic accents along its edges (even the hinges get some bling). The Spectre line used to lean more heavily into a bejeweled look, but now HP is trying to tone things down while also delivering some style. Little things, like the case's cut off corners and the slightly softer edges, give the x360 16 an artisanal quality. It doesn't look like a cookie-cutter PC, and that’s the point.

Like many 16-inch notebooks we've seen recently, the x360 replaces a 15-inch model. HP was able to fit a larger display into a similarly sized case by reducing bezel sizes and moving toward a taller 16-by-10 aspect ratio. That results in a screen that's 22 millimeters taller, with 11 percent more vertical viewing area, according to HP. Our review unit featured a 4K+ OLED monitor that looked simply beautiful, no matter what I was looking at (though I'm a sucker for OLED's deep black levels and eye-popping colors). There are also 3K+ LED screens available if you don't want to pay a premium for OLED.

Unfortunately, the x360 doesn't support HDR and Dolby Vision like Dell's XPS line, or a fast 120Hz refresh rate like we saw on the Surface Laptop Studio. For some, not having those features may be a dealbreaker, especially if you plan to watch a lot of HDR video, or if you're intrigued by the smoothness of having a high refresh rate display. But if you're upgrading from an older PC, the x360's screen will still be a significant step up.

HP's convertible hinge makes it easy to flip open the x360 16 one-handed. Rotating it around into a tent or tablet mode takes a bit more effort, due to the sheer size of the system. Just like every convertible PC, the tent formation is a nice way to prop up the x360 if you're just lounging in bed. You can also flip the keyboard upside down to make the display prop up on its own, which could be helpful if you just need an additional screen alongside a desktop. I didn't find the x360's tablet mode very useful, though; it's just way too heavy to hold up for long, and it's simply awkward to use. But really, having a larger screen for productivity work and Netflix binging makes up for that.

Speaking of work, typing up this review on the x360 made me fall in love with HP's full-sized keyboard even more than I did with the 13-inch model. It's wide enough for me to spread my fingers out comfortably, and there's a satisfying amount of travel to every key. It’s like a concert piano just begging to be played. My only complaint is that it's a bit non-standard: there's a fingerprint sensor instead of a right Control key, as well as an assortment of specialized function keys to figure out. On the plus side, the touchpad is now 39 percent larger, and it still feels incredibly smooth and reliable.

Our review unit was the top-end $2,030 configuration: You get an Intel Core i7-11390H processor (there's no 12th-gen support yet), 16GB of RAM, NVIDIA's RTX 3050 GPU and a 1TB NVMe SSD with 32GB of Intel Optane memory. The x360 had no trouble with basic productivity tasks — not a surprise given its hardware — and I appreciated just how peppy it made Windows 11 feel. It opened apps up swiftly, and it didn't show any signs of slowdown as I piled on more and more browser tabs.

The only disappointing thing was its disk speeds. According to the ATTO bench, it had average write speeds of around 2 GB/s, and read speeds that were significantly slower than most notebooks we see today. That's honestly surprising for an NVMe drive. When we asked HP about those issues, a representative noted that Optane drives can sometimes show lower performance figures, especially when you're testing large amounts of data. (We run the ATTO benchmark with a 4GB file setting.)

When it comes to general system benchmarks, the x360 16 scored similarly to last year's Surface Laptop 4 15 and ASUS's ZenBook Duo. I expected higher numbers, though, as it has a more powerful GPU than either of those systems. That RTX 3050 is the lowest-end entry among NVIDIA's current offerings, but it's still better than what you'd get with Intel's integrated Xe graphics. It was also serviceable for basic 1080p gaming: I had no trouble playing a few rounds of Halo Infinite with medium graphics settings. The x360 16 is a solid option if you'd like to play a few titles once in a while, perhaps during a dull work trip when you don’t want to lug around a heavier gaming notebook.

Big screens come with huge energy demands, though, so I wasn’t surprised when the x360 only lasted 10 hours and 55 minutes during our battery test. HP claims it’ll go for up to 17 hours with mixed use performance, but it’s unclear how they tested that. Our benchmark relies on looping an HD video, so it’s not exactly stressful. I wouldn’t expect a 16-inch notebook to easily reach the 15 hours of battery life we’ve seen on smaller machines, and the x360 still offers enough juice to power through a workday.

Being flexible in more ways than one is a major selling point for convertibles. The x360 16 is equally at home while you're curled up in bed as it is in a business meeting. The included stylus, which magnetically attaches to the side of the laptop, is also helpful for jotting down notes and simple illustrations. And, given just how important video calls are these days, the x360 is also well equipped with a 5-megapixel webcam and a few software features to beautify your face. It's certainly a step up from the 720p cameras we've seen over the last few years. For the privacy conscious, you can also physically block the camera by hitting a function key, as well as disable the microphone. 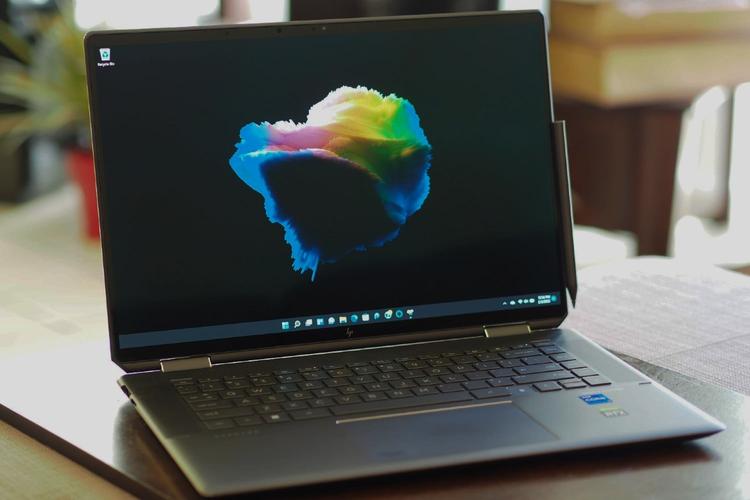 Unlike many other style-focused notebooks, HP also includes a wealth of ports, including two USB-C connections, a USB Type-A port (in a nifty drop-down slot), a full-sized HDMI socket and a microSD card slot. And yes, the headphone jack is still there too; HP isn't giving up on it like Dell has with the new XPS 13 Plus. While the x360 can be charged over USB-C, it ships with an AC adapter that plugs in over a barrel connection.

As much as I love our review model's OLED screen, the better x360 16 deal is the LED-equipped $1,700 model with the same CPU, RAM and RTX 3050 GPU. It has a smaller 512GB SSD, but you can always upgrade that down the line. If you're less concerned about gaming performance, the entry-level $1,500 model drops the RTX 3050 for Intel's Xe graphics.

As the only big-screen convertible game in town, HP could have easily phoned it in with the Spectre x360 16. Instead, it’s given us a powerful premium notebook that can do some gaming amid a flurry of Zoom calls, and look good while doing it.