HP Spectre x360: Everything you need to know about HP’s premium convertible

When it comes to Windows laptops, very few brands have the same reputation as the HP Spectre x360 line. This family of convertible laptops offers one of the most premium and beautiful designs you can find on a laptop, combined with high-end specs and portability. With the 2021 models, HP has also introduced new versions that bring taller displays to the lineup, making them even better for productivity, and reaffirming their position as some of the best laptops out there.

If you want to know everything there is to know about the HP Spectre x360, you’ve come to the right place. We’ve rounded up all the information we have on the latest models, including all the different sizes. The most recent of these models is the SPectre x360 16, and it’s not available to buy yet, so we don’t have the full details on its specs just yet. We’ve rounded up as much as we could, however, and it’s already enough to distinguish this new model from all the others.

When is the HP Spectre x360 release date?

The latest models of the HP Spectre x360, specifically the 13-inch, 14-inch, and 15-inch versions, were launched in October 2020, shortly after Intel introduced its Tiger Lake processors. With Intel recently announcing 12th-generation Alder Lake CPUs, we could be looking at refreshed versions of these models sometime soon. In fact, HP seems to have discontinued all of these models on its website, though you can at least still find the Spectre x360 14 at Best Buy. Presumably, we’ll see a refresh of these models soon.

The HP Spectre x360 16 was announced more recently, however, and launched in late 2021. It has Intel’s H35 series processors, which have a 35W TDP and debuted in 2021. Since it’s so recent, you shouldn’t expect a refresh anytime soon, plus these processors didn’t receive a direct refresh with Intel’s Alder Lake lineup, so it’s hard to say where HP will go with it next.

The Spectre lineup includes some of HP’s best laptops, and it tends to get refreshed every time there’s new major hardware, such as a new generation of CPUs from Intel. However, nothing has been officially announced since Intel introduced Alder Lake CPUs, so you’ll need to wait a while longer if you want a newer version.

What is the price of the HP Spectre x360?

Finally, the HP Spectre x360 16 officially starts at $1,639, but it’s currently discounted. If you want the Nocturne Blue model without dedicated graphics, and with 16GB of RAM, 512GB of SSD storage, and a 3K+ display, you can have it for $1,429.99. The Nightfall Black version is fully customizable and it’s starting at $1,499.99 for the same configuration.

The latest models of the HP Spectre x360 come with some notable changes, but they’re mostly a spec bump from previous models. Here’s a quick rundown of what the latest models added.

As you’d expect with any generational refresh, the latest models of the Spectre x360 family all come with Intel’s 11th-generation “Tiger Lake” processors. These new processors bring a ton of improvements to the table, improving on Intel’s 10nm processor architecture, but also include the new Intel Iris Xe graphics. This integrated GPU is much more powerful than previous generations, and it makes certain GPU-focused tasks easier.

Something else that these new processors enable is support for Thunderbolt 4, but that’s not necessarily much different. Thunderbolt 4 essentially takes the maximum capabilities of Thunderbolt 3 and makes them standard, but HP already typically used the maximum Thunderbolt 3 configuration. Regardless, you get 40Gbps of bandwidth, which is great for connecting peripherals.

Yes, one of the things that’s new with the latest generation of Spectre is a brand-new model, the Spectre x360 14. Typically, Spectre laptops have existed in both 13-inch and 15-inch sizes, and both had 16:9 displays. The Spectre x360 14 not only introduced a new size, but a new form factor overall.

The Spectre x360 14 comes with a 13.5-inch display, but unlike its siblings, it’s not using a 16:9 aspect ratio, it’s 3:2. This is a taller display that’s usually seen in Microsoft’s Surface line, and it gives you much more display area for content. Reading articles, browsing the web, and writing is now more convenient because many more lines fit on on the screen at once. It’s also interesting because it has about the same width as the 13-inch model but the same height as the 15-inch model. And, just like its other siblings, it has an option for an OLED display, but now in an uncommon 3K2K (3000 x 2000) resolution.

The latest member of the Spectre lineup is the Spectre x360 16, and it too is a completely new entry in the family, with some changes to call its own. The Spectre x360 16 introduces yet another new display type, now coming with a 16-inch panel in the 16:10 aspect ratio. 16:10 is taller than 16:9, but not as tall as 3:2, so it gives you a middle ground that might be ideal for your needs. Of course, being a 16-inch display means it’s going to be the tallest of the lineup anyway. 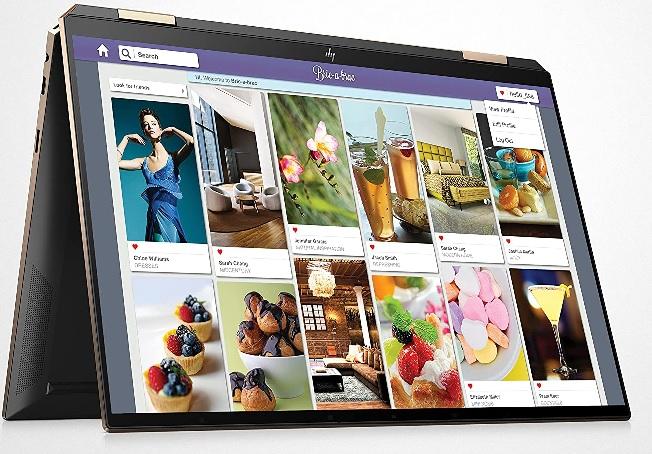 Another change that’s a big deal for the Spectre x360 16 is that it has a 5MP webcam that can record 1080p video. This is major because the rest of the Spectre lineup uses a 720p webcam and a tiny sensor, meaning the image quality is not great. With remote working being much more prominent now, this improved webcam makes a big difference. Plus, it has smart features like auto frame, beauty mode, and lighting correction.

The Spectre x360 is also different on the inside. It’s the only member of the Spectre family to pack Intel’s H35-series processors. These are mobile chips with four cores and 35W TDP, meaning they’re noticeably faster than the 15W processors in the rest of the lineup, but they still include Intel Iris Xe graphics. This is different from the typical H-series processors, too, which have a 45W TDP and up to 8 cores, but no Iris Xe graphics. The H35 series is meant to give you better overall performance while still being efficient.

Not only that, but the Spectre x360 16 is the only model to give you the option for dedicated NVIDIA graphics with a GeForce RTX 3050 Ti graphics card. In the past, some models of the Spectre x360 15 could be had with dedicated graphics, but now, that’s reserved for the 16-inch model, making it ideal for content creation and even some gaming.

One last change is that the Spectre x360 16 is the design, which has a much smaller emphasis on the dual-tone look. The Nightfall Black model only has a small differently-colored sliver, and the Nocturne Blue model only uses a single color, which may be a good or bad thing depending on your preference.

The HP Spectre x360 16 comes with the option for dedicated NVIDIA graphics, including an NVIDIA GeForce RTX 3050 Ti. This makes it suitable for more demanding tasks like content creation and even some gaming.

With Intel 11th-generation processors, the entire Spectre lineup also comes with integrated Intel Iris Xe graphics, giving you decent graphics power for some tasks. But only the 16-inch model has dedicated graphics.

HP also says the HP Spectre x360 16 will have a 4K OLED display, but since it’s not available yet, we don’t know the exact resolution that model will be.

Yes, the latest Spectre x360 models all come with Thunderbolt 4 support, with two Thunderbolt ports. HP’s SPectre lineup already supported the maximum Thunderbolt 3 configuration in the past, so there aren’t any major differences in that regard.

Another difference is the ports, with the 15-inch and 6-inch models featuring HDMI, while the 13- and 14-inch versions don’t. The bigger laptops also have bigger batteries. and the color options aren’t all the same in the different sizes.

The Spectre x360 16 is the most different of the family, featuring 35W Intel processors, dedicated NVIDIA graphics, and a new design that de-emphasizes the dual-tone look somewhat.

Most models of the HP Spectre x360 you can buy directly from HP are already shipping with Windows 11 preinstalled. If you buy from a different retailer, though, you may still get Windows 10. Regardless, all the current Spectre x360 models will support the upgrade to Windows 11 for free.

All models of the HP Spectre x360 include a charger in the box. The 13-inch and 14-inch models include a 65W USB Type-C charger. The 15-inch model comes with a 90W power adapter that uses HP’s proprietary barrel-type connector.

It’s currently unknown what charger the HP Spectre x360 will include, but the laptop also has a barrel connector for charging.

For each size, HP lets you mix and match most of the configuration options available. The 13-inch and 14-inch models come with either an Intel Core i5-1135G7 or Core i7-1165G7 processor, as well as either 8GB or 16GB of RAM. The 15-inch model is only available with the higher-end configurations.

For storage, all models range from a 256GB SSD to a 2TB SSD. The 14-inch and 15-inch models also give you the option to add Intel Optane memory to the 256GB and 512GB SSD configurations so you can get faster performance for your most common files.

At writing time, not much is known about the Spectre x360 16 configurations.

The colors available for the Spectre x360 depend on the size you get. The 13-inch and 14-inc models come in a plain Natural Silver, Nightfall Black (combining black with copper accents), or Poseidon Blue (combining dark blue with gold accents). The 15-inch model offers the same options except for Natural Silver.

The Spectre x360 16 comes in Nightfall Black or Nocturne Blute, but neither of these options will get you a dual-tone design like the smaller siblings. These are both single-color designs.

Most models of the Spectre x360 use a 2.2mm webcam with 720p resolution. The small size is meant to allow for smaller bezels, but it means the camera can’t capture as much light, and thus quality isn’t the best.

However, the Spectre x360 16 features a 5MP “GlamCam” webcam. This one is capable of recording 1080p video, plus it includes features like auto frame, lighting correct, and a beauty mode.

All sizes of the HP Spectre x360 support Windows Hello, featuring both an IR camera for facial recognition and a fingerprint sensor. You can choose your preferred way to unlock your PC.

Currently, Android app support in Windows 11 is only available for Windows Insiders enrolled in the Beta channel, though you can get it to work on non-Insider PCs.

The current HP Spectre x360 models meet the minimum requirements for Android app support. These requirements include 8GB of RAM, an Intel Core i3 processor or higher, and an SSD drive, all of which the Spectre x360 matches or exceeds. You should be able to get a solid experience with Android apps once they’re widely available.