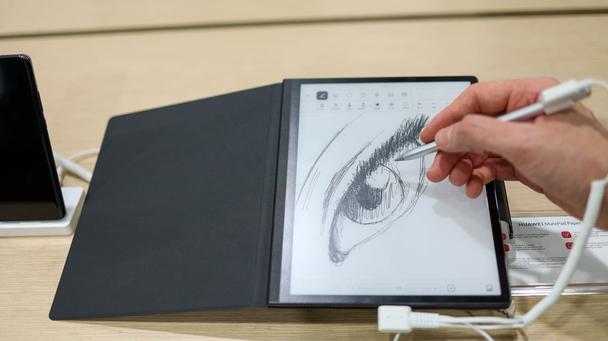 If you don't think you have enough screens in your life what with your phone, tablet, Kindle, smart screen assistant, laptop, computer, and TV, then Huawei's got another one to add to your gadget arsenal – the E Ink-toting MatePad Paper.

Complete with its M Pen stylus and vegan leather folio case, it's poised to replace your pen and paper, eBook reader, and maybe even your Android tablet.

The MatePad Paper is also more fully functional than a traditional E Reader like a Kindle Paperwhite or a Kobo Libra 2, with a tablet-grade processor, decent speakers, support for Android apps and 64GB of storage.

So what can Huawei really bring to the E Ink tablet market? After a short time with the device, the answer seems to be seriously premium-feeling hardware.

The MatePad Paper, which launched alongside the MateStation X and MateBook E among other tech from Huawei, was unveiled with Euro pricing only.

It's worth noting that the tablet ships with both an M-Pen stylus and vegan leather Folio Case in the box - things you certainly don't get included with any iPad. 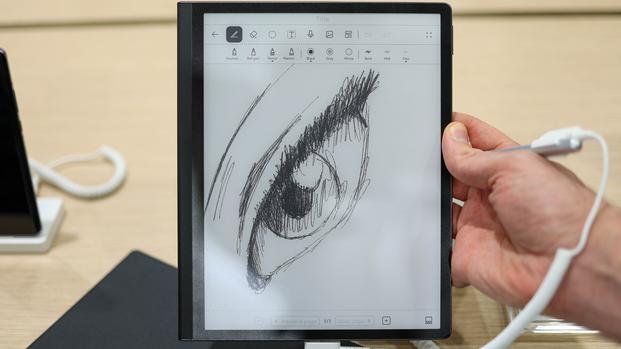 Availability will vary by region, though you can be sure the tablet won't be launching in the US. If you're eyeing up the MatePad Paper, keep an eye on Huawei's Store in your locale for pre-order information.

Just like the beautifully designed Onyx Boox Note Air line, the Huawei MatePad Paper is sleek, slender and solid. Its metal body clocks in at a svelte 6.65mm thin, and weighing 360g it feels reassuringly weighty despite its size. Meanwhile, the matte front and back are rich to the touch.

With a USB-C port at the bottom side, a fingerprint scanning power button on the top right, and a volume rocker on the right side, it's kitted out with the same inputs as a traditional tablet.

It also sounds decent thanks to dual speakers, which were a bit thin in our quick hands-on, but better than we'd ever expect from an E Reader.

It's excellent Huawei ships the MatePad Paper with both the folio cover and M-Pen. The folio cover is more premium than the adhesive one that shipped with the Onyx Boox Note Air, which was let down by an adhesive strip that secures the tablet in place. Huawei uses magnets, and magnets do a great job.

As for the pen, we found the writing experience to be a joy. Scrawling on the screen feels like sketching on paper, and it's both responsive and pressure sensitive, with only 26 millisecond latency and 4096 of pressure sensitivity.

As for the screen, it's a 10.3-inch panel with a resolution of 1872 x 1404, making for a pixel density of 227 pixels-per-inch. That might not sound sharp to anyone who speaks phone-screen-specs, but for a tablet-sized device, it's excellent.

With a 32-level backlight, the MatePad Paper should also look great in the day or night. After all, E Ink displays are matte non-reflective, so even without a backlight active, visibility isn't an issue in bright conditions.

While the TikTok app was pre-installed on the tablet we tried out, with the monochrome E Ink display's modest refresh rate, video didn't look good when using it, but that doesn't stop the tablet trying to showcase them, and we appreciate that Huawei doesn't block access to vidoe-centric services.

Powered by a mid-range Kirin 820E processor, the MatePad Paper seemed to be as responsive as an E Ink display device gets, with any slowdown being a result of the display tech rather than power under the hood.

It also comes loaded with 64GB storage and 4GB RAM as standard – about what you'd expect to see for a mid-range tablet.

Running Harmony OS 2, like the Boox Onyx series, it supports APK installs, which basically means it runs on a variation of Android OS underneath all the Huawei customisations.

Apps that aren't APK sideloads can be downloaded to it using the Huawei AppGallery.

The interface looks very different to any Harmony OS device we've seen before. The left side of the screen stacks quick access items – Notes, Bookshelf, Bookstore, Apps etc. It's fit for purpose, and was easy enough to navigate around.

While the 3,628mAh battery might sound small for a tablet, for an E Ink device it's massive, and it's set to last around 28 days, charging up at a respectable 22.5W.

Where would the Huawei MatePad Paper fit in your life? That's hard to say at this stage. A lot will come down to how easy it is to access notes across multiple devices and whether Huawei's book ecosystem is comprehensive – and more importantly, whether the Kindle Android app runs on it. We already know that the hardware is great.

If Huawei's nails note syncing, then the pen input element is the part that excites us the most. We can't see the MatePad Paper replacing our Kindle given its size.

Neither can we see it replacing our tablet, which we use for watching videos. It's probably more a middle-ground option for professionals reading larger-format pages or students reading course books.

As for whether it beats out the competition from Boox and ReMarkable, you'll have to check back for our full review to find out how it stacks up.