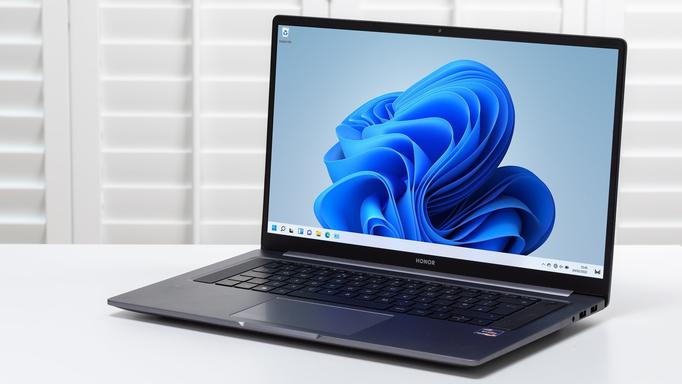 Honor and Huawei have been separate companies since November 2020 but there’s still a good deal of similarity in their laptop offerings. Both focus on aggressively priced mid-range machines targeted at the general home and business user, both share a similar design language and both have started to offer higher display refresh rates than the typical 60Hz to distinguish their machines from the competition: 90Hz in the case of the recent Huawei MateBook 14s and 144Hz in the case of this new Honor MagicBook 16.

I think the MateBook 14s is Huawei’s best laptop to date so can the same be said for Honor’s new quick-refreshing mid-ranger?

READ NEXT: Our guide to the best laptops to buy today

The MagicBook 16 is another solid, well-priced, general-purpose laptop from Honor. With a powerful six-core AMD Ryzen processor, a 512GB SSD and 16GB of RAM it’s ideally suited to most everyday computing needs, but the integrated AMD Radeon graphics processor does let the side down a little.

That’s doubly a shame because the MagicBook 16’s party trick is a 144Hz display refresh rate, a feature that you need a capable GPU to get the most from. A Pro version of the MagicBook 16 with an Nvidia RTX 3050 GPU is coming but, at the time of writing, it doesn’t have a UK release date.

Honor’s latest effort also continues the trend of dialling down the strangeness previously inherent in the brand with the webcam now relocated to above the screen. Sadly, the annoying habit – shared with Huawei – of dividing the storage into two partitions continues and the handy NFC-based screen share tech only works with smartphones running Honor’s heavily modified version of Android.

The MagicBook 16 currently comes in one flavour and will set you back £850. How much the new RTX 3050-equipped MagicBook 16 Pro model will cost is currently unknown, but expect it to be close to £1,000.

There are several contenders if you don’t like the look of the MagicBook. The Huawei MateBook D15 has long been a favourite here at Expert Reviews and is a solid recommendation if you want a good laptop for the basics that won’t cost an arm and a leg. With an 11th generation Intel Core i5 processor, a 512GB SSD and a price tag of just £590, it’s very good value, although you’ll have to put up with no keyboard backlight and a webcam that looks up your nose.

If you fancy a machine with a high refresh rate display and a graphics card to make use of it, then the HP 16.1in Victus is worth a look. The entry-level model with an Nvidia RTX 3050 GPU can be picked up for just £749. The only problem is the display. Granted it refreshes at 165Hz, but it’s dim and drab. That’s not such a problem for gaming and productivity but it is for almost everything else.

If portability is key, then Samsung’s 15.6in Galaxy Book Pro recommends itself. At 1.05kg, it’s amazingly light for a full-sized 15.6in laptop and it has a truly sumptuous AMOLED display. Battery life is good, too. The only real downside is the shallow and rather bouncy keyboard. At £1,160 it’s good value, but be aware Samsung is lining up a replacement so it might not be around for long.

Finally, Huawei’s MateBook 14s also has a higher-than-usual refresh rate but only at 90Hz rather than 144Hz. However, that does apply to a pin-sharp 14.2in, 2,520 x 1,680 touch-enabled display. At just £999 it’s a lot of laptop for the money, although you’ll need to pay more for the 1TB model if you want Thunderbolt connectivity.

READ NEXT: The fastest and most portable gaming laptops

Put the new Honor MagicBook 16 next to the 2021 MagicBook Pro, a Huawei D15 or D16 or the MateBook 14s and, size and logos aside, it’s hard to avoid the feeling that there's a single guiding hand behind the design language. That's not a criticism. All four machines look smart, contemporary and restrained. They also look as though they cost more than they do, which is never a bad thing.

A largely aluminium affair, the new Honor is a little heavy at 1.84kg, but at only 18.2mm thick it's easy enough to slip into a backpack. The aluminium body gives the MagicBook a reassuring sense of solidity and you have to twist the lid pretty brutally to get any significant flex. The Space Grey colour scheme looks very smart and doesn’t show fingerprints too badly.

Ports are sensibly dispersed and pretty generous, with two Type-A USB ports on the right and two Type-C on the left. All four are 3.2 Gen 1 spec, so the maximum supported data transfer speed is 5Gbits/sec (this being an AMD-based machine, the lack of Thunderbolt support is no surprise). There’s also a 3.5mm audio jack on the right and an HDMI 2.0 socket on the left but no memory card slot. 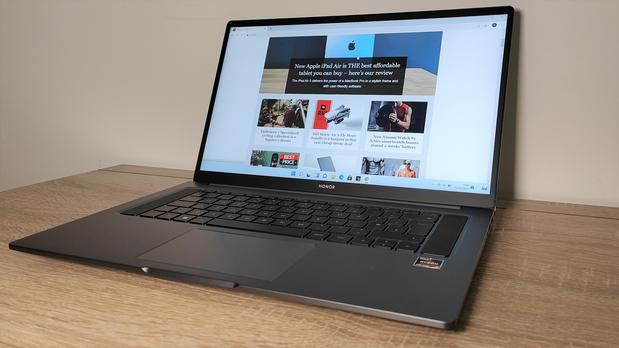 There’s little point in removing the bottom panel because all you can then do is swap out the wireless card and single SSD. Everything else is securely soldered in place. As well as that Realtek Wi-Fi 6 card and Bluetooth 5.1 the MagicBook 16 also has an NFC radio but, unless you have an Honor smartphone that can make use of MagicBooks’ NFC-linked screen-sharing protocols, it’s not much use.

The chiclet keyboard is a little shallow when it comes to travel but otherwise is a good effort, with a positive and near-silent key action. There’s no numeric keypad, the ample space to each side of the keyboard being occupied by rather ugly loudspeaker grilles. The right-hand speaker grille also houses a fingerprint scanner. Honor has historically been stingy in giving its laptop keyboards any illumination so I was happy to see that the new MagicBook has a two-level white backlight.

The plastic-covered Precision touchpad is pleasant to the touch and works faultlessly. It’s a decent size at 120 x 72mm, although Honor could easily have made it 5mm or so larger in each direction. The click-action feels just a fraction on the loose side but not by enough to mark it down.

The 720p webcam is the usual rather miserable affair you find on the majority of Windows PCs: dull, grainy and not particularly colourful, it’s better than nothing but not by much. There’s also no support for Windows Hello IR face recognition so you’re stuck with the fingerprint reader for biometric security.

The MagicBook 16 is another example of the recent trend of manufacturers fitting standard-size laptops with larger displays instead of trying to shave a few millimetres off the width and depth.

And so here, we have a 16.1in display squeezed into a chassis no larger than you’ll see on most conventional 15.6in laptops. The display occupies more than 87% of the lid and the screen bezels are a narrow 7mm at the side and 9mm at the top. Some previous Honor laptops had slightly slimmer top bezels but that was before it decided to put the webcam somewhere sensible.

The stand-out feature of the screen is its 144Hz refresh rate, but if you want to maximise battery life you can drop that down to 72Hz in the Windows 11 advanced display settings menu. Resolution is a standard 1,920 x 1,080, which works out at 137dpi. A 15.6in panel at the same resolution delivers a slightly sharper 141dpi, but you can’t tell the difference at normal viewing distances.

Technically, the matte-finish panel is thoroughly proficient. Maximum brightness reaches 353cd/m², it’s capable of reproducing 95.9% of the sRGB colour gamut and has a contrast ratio of 891:1. The Delta E colour accuracy measured a solid 1.71, which again is good for a machine in this price range, and the panel boasts TÜV Rheinland Low Blue Light Certification, which should make it easier on your eyes in prolonged use.

Does the 144Hz refresh rate make much of a difference to the MagicBook 16? I’m not so sure. The primary reason people usually want a higher refresh rate display is for gaming, but without a discrete GPU the MagicBook is clearly not a gaming machine. The fluidity of the MagicBook's display is certainly not without its attractions, though, as long as you’re content to admire how smoothly menus, spreadsheets and web pages scroll.

The speaker grilles that bracket the keyboard are a bit of an eyesore but they and the speakers below them do their job well. The MagicBook produces a loud (84dB at 1m distance), punchy and well-balanced sound with a decent amount of bass.

The AMD Ryzen 5 5600H processor inside the MagicBook is a strong performer thanks to its six cores and maximum boost clock speed of 4.2GHz. Having 16GB of DDR4 RAM also helps. This helped the MagicBook to a score of 244 in the Expert Reviews in-house media benchmark, which is very good for a laptop in this price bracket without a discrete graphics card. The GeekBench 5 CPU tests told a similar story, with good single-core and even better multicore scores.

The integrated Radeon RX Vega 7 integrated graphics processor proved rather less capable at gaming than Intel’s Iris Xe equivalent but, in either case, you’ll be limited to older or less demanding titles such as Dirt: Showdown, which we use as a benchmark title for exactly these purposes, or running titles at 1,280 x 720 rather than 1,920 x 1,080. I played Doom (2016) at the former resolution and it ran at between 45fps and 60fps depending on the level of onscreen mayhem.

The 512GB Samsung PCI-E 4.0 NVMe SSD recorded some impressive sequential read and write times of 2,956MB/sec and 2,871MB/sec respectively but, in typical Huawei/Honor style, the drive is divided into a 119GB (C:) Windows space and a 337GB (D:) data space, something that is pointless and annoying in equal measure.

Our standard video rundown test using VLC drained the rather puny 56Wh battery in 7hrs 13mins, which is poor, with only the MateBook D15 doing worse among the selected comparators at 7hrs 10mins. Even turning the screen brightness down to its absolute and near unusable minimum and dropping the screen refresh rate to 72Hz barely got me to the 7hrs 30mins mark, 95 minutes short of Honor’s claimed duration for 1080p video playback. Getting through a full working day on a single charge simply isn't possible. Oh, for the 84Wh battery fitted to the Huawei MateBook D16.

Much like its Honor and Huawei forebears, the MagicBook 16 is a solid and competent laptop that does little wrong. It has power enough to quickly chew through the majority of everyday computing tasks and, although the integrated GPU is rather feeble, it isn’t notably worse at gaming than any other laptop running Intel’s Iris Xe integrated graphics.

In the end, the only reason the MagicBook 16 doesn’t get five stars is that the battery life ismediocre. If, however, you’re purchasing a laptop for mainly home use that won’t see much in the way of use on the road, then this is a very good option.