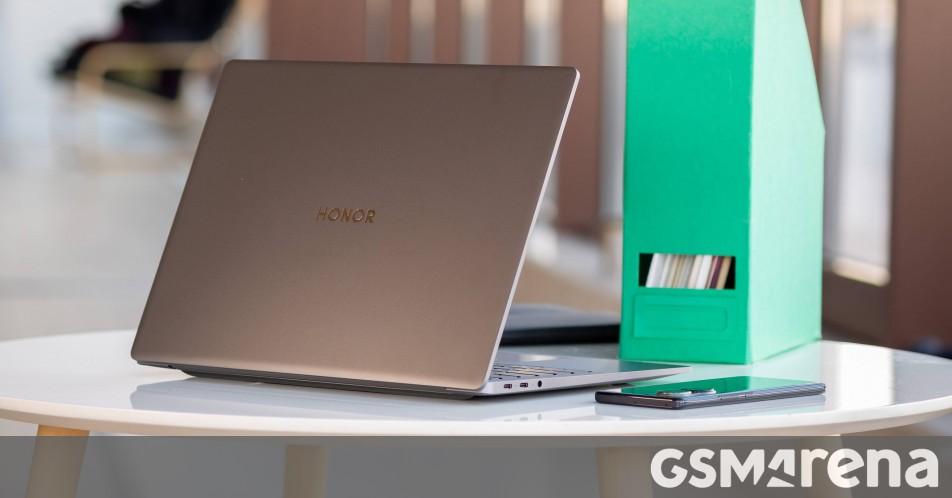 Last September Honor debuted its MagicBook View 14 in China powered by Intel’s 11-gen Core chipsets, NVIDIA GeForce MX 450 GPU and running Windows 11 out of the box. The same laptop (minus the dedicated graphics card) came to Europe later in Q4 and we are finally ready to give you our impressions after a test period where this reviewer used the MagicBook View 14 as his sole work machine for over two weeks.

Coming from MacOS to a Windows 11 laptop took some getting used to at first and while I am not fully converted to make the switch just yet Honor certainly made an appealing ultra-portable which covers all the major pillars of a good laptop - premium build, good screen and keyboard, decent performance and ample battery endurance. Should this be on your shortlist or are you better off with other similarly sized compact laptops?

MagicBook View 14 features an aluminum unibody design weighing just under 1.5 kg. The laptop is 14.5mm at its thickest point and all this translates to an easy everyday carry that fits any normal-sized backpack. Our review unit comes in the sleek Space Gray color, but Honor is also offering a more eye-catching dark blue option. One premium mark that always deserves praise is when you can open up the laptop lid with just one finger and I can gladly report this is the case here.

The star of the show is the 14.2-inch LTPS LCD touchscreen with its 2520 x 1680 pixel resolution, 90Hz refresh rate, and a 3:2 aspect ratio. The taller aspect ratio is a welcome productivity facet allowing for more vertical content on the screen which is handy if you rely on two side-by-side windows like a browser and word editor or are constantly digging through excel sheets. The panel is made by TCL’s Huaxing Optoelectronics and bears the MNE208UA1-1 part number.

Viewing angles are great with no noticeable shift in contrast. For color rendering, the display aims for 100% sRGB and 72% NTSC coverage. Honor claims 400 nits of brightness output and we measured a maximum of 405 nits, which is plenty for indoor use and usable outdoors too though the glossy surface is not ideal for this scenario.

The default screen refresh rate is 60Hz but it can be switched to 48Hz or 90Hz by pressing the Fn+R keys. I personally preferred the highest refresh rate setting with the UI feeling smoother. The bezels are quite slim and translate to a nice viewing experience and the 10-point multi-touch functionality is nice for the few occasions when you’d use your fingers instead of the glass trackpad.

One of the few times I preferred to use the touchscreen was while binge-watching TV shows in dimmer-lit rooms. It was much easier navigating the UI without having to use the trackpad or keyboard and Windows 11 seems better suited for touch controls than its predecessor.

The integrated 5MP camera with a 90-degree wide-angle lens and dedicated ISP chip is a clear step up from the world of 720p webcams on older laptops and does make a difference in clarity on Skype and Zoom calls. The laptop also comes with Windows Hello and has a dedicated fingerprint scanner embedded in the power button.

I/O is decent for an ultra-portable of this size. The left side boasts two USB 3.2 ports with the second one doubling as a Thunderbolt 4 connector. You also get a headphone jack/microphone combo. The right-hand side houses a single USB 3.2 (type-A interface) and a full-sized HDMI connector.

The keyboard is your usual chiclet affair with decent travel (Honor claims 1.5 mm) and you quickly get used to its dimensions. It offers a two-stage backlight which is good enough to use in the darker rooms. The only gripes I had with the keyboard are the lack of a full-sized enter key and the squished arrow keys which are too cramped and resulted in a fair share of mispresses. You also get four microphones and a quad-speaker setup that gets decently loud.

The base variant MagicBook View 14 comes with Intel’s 11-gen Core i5-1132H Tiger Lake-U processor while the higher end model we have brings a Core i7-11390H. The laptop comes with a 35W balance mode which draws less power and offers quieter operation. If you need more power you can enable the 45W performance mode (Fn+P) as we did during our benchmarking tests. Note that you need to be plugged into the power adapter for the high-performance mode.

There are four Willow Cove cores, each with two threads and a base frequency of 3.4Ghz in the 45W performance mode which can turbo boost up to 5Ghz when you only need a single-core. You get 12MB level 3 cache on the Core i7 chip and a regular TDP of 35W. 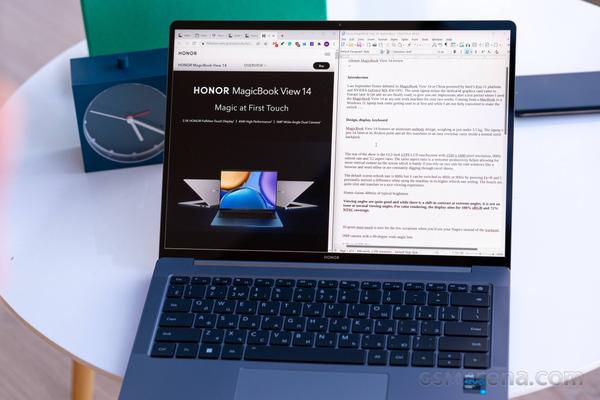 Let’s talk about benchmark scores. Starting off with Geekbench 5 - MagicBook View 14 manages 1,548 single-core points and 6,118 points on the multi-core test. A comparable AMD Ryzen 7 5800H would fare 8% worse off in the single-core test but would make up for that in the multi-core department with a 20% advantage over the Intel chip.

Switching over to Cinebench R20 reveals a 2,523 point outing which is impressive for a thin and light laptop. The integrated Iris Xe graphics card is admittedly not your ticket to triple-A gaming but it gets the job done for casual titles and light video/photo editing. Honor equipped the laptop with dual fans and wing-shaped heat sinks which only kicked in during intensive benchmarking sessions while normal everyday tasks made the fan noise barely noticeable.

This is the first laptop we got with Windows 11 Home out the box and it’s a bit polarizing. The interface looks familiar yet feels dramatically different compared to Windows 10 and I found myself looking for certain UI elements in the wrong place more than once. Microsoft made some advancements in touch input recognition and the whole UI feels noticeably more touch-friendly which is a welcome addition.

The new personalization menus layout and detailed options are great as is the system-wide dark mode. The snap assist tool allows you to manage up to four apps on your screen without moving your cursor all that much. It took me a few days to get used to the new start menu and I didn’t make much use of the new widget panel but then again I wasn’t a fan of its live tiles predecessor either.

The new default apps settings are an unnecessary pain and if you want to set a third-party browser as your default you have to go through the process of selecting that one to open individual file types from HTML to HTTPS which just takes a needless amount of time. Despite some shortcomings, I found Windows 11’s refreshed visual identity a welcome change and had no issues with stability or performance.

Honor also has its Multi-Screen Collaboration tool which lets you hook up compatible Honor phones to the laptop. You can mirror your phone screen on the laptop, transfer files and pictures wirelessly and take audio and video calls on the big screen. I tested this out with a Honor 50 we had laying around at the office and while the pairing process was a breeze the actual screen mirroring was quite slow and laggy.

Honor managed to fit a decently sized 60Wh battery inside the MateBook View 14. The battery is rated at 15 hours of local video playback at 1080p resolution and 150 nits brightness and 11.7-hours of mixed usage again at 150 nits brightness. In our testing which consisted of playing a 1080p video in YouTube over Chrome with 75% screen brightness at 50% volume, we got 6 hours and 56 minutes which is quite respectable.

Honor is bundling a 65W USB-C SuperCharger that weighs 200 grams with the detachable USB-C cable included making it super convenient for traveling with one single charger for all your devices. Interestingly enough, you can charge the laptop via either of the two USB-C ports at the maximum 65W speeds. A full charge took 104 minutes with the laptop reaching 80% after an hour on the charger.

With its MateBook View 14, Honor managed to reach an impressive mix of power and portability at a price point that is hard to be rivaled by competitors. Better yet some bundles include an Honor 50 smartphone which makes this an even sweeter deal if you can snag one up. At the moment the laptop is limited to China, Russia, Belarus and France where it retails for €1,099. There’s even a bundle that lets you get the Honor 50 for just €400 extra.

A quick comparison reveals few laptops that can match the excellent display, premium and light build, fast performance and long-lasting battery of the MagicBook View 14.Acer’s Swift 3 and 5 series come to mind as does Asus’s Vivobook S14 as potential competitors in the €1,000 price bracket. Lenovo’s IdeaPad Slim 7i Pro, MSI’s Prestige 14 Evo and LG Gram 14 can be had if you venture above the €1,000 threshold.

If you’re not tied to the Windows ecosystem you could spend a bit more - €1,200 can currently get you a 13-inch M1 MacBook Air with 8GB RAM and 512GB storage. Also, keep in mind that a barrage of Intel 12-gen CPU powered laptops are due to launch in the coming months.

MateBook View’s 14.2-inch QHD+ screen is an absolute joy to use with vibrant colors, spacious 3:2 aspect ratio and it even supports 10-point multi-touch. The keyboard offers decent travel and is nicely laid out and the glass trackpad is quite impressive.

Intel’s Core i7-11390H handles all office tasks with ease while the integrated Iris Xe GPU manages light games and content creation. Having a 60Wh battery on a thin and light laptop like this is a stellar move and it makes you forget about sitting next to a wall plug.