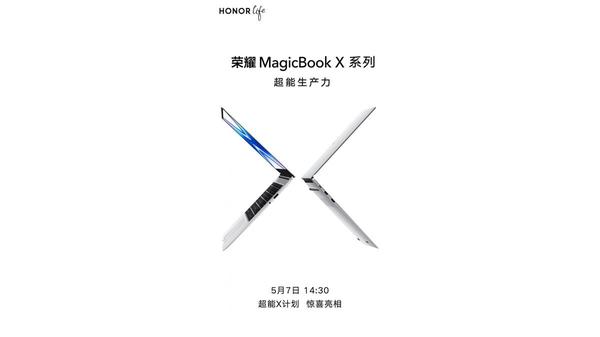 Smartphone maker Honor is expected to launch a couple of laptops in India soon. These laptops are a part of Honor’s MagicBooks X series which was launched in China last year.

The laptops have been listed on Amazon ahead of the official announcement. While the listing does hint at the key specifications of the laptops, it doesn’t reveal the launch date yet nor does it reveal the exact name of the products slated to launch.

However, if you match the key features mentioned in the listing like an Aluminium metal body and the tagline that Honor has used “Magic at first sight” is a clear giveaway that the laptops are from the MagicBook lineup.

The Amazon listing also reveals the webcam housed under the keyboard, 56Wh battery rated to last for up to 13.2 hours, 65W fast charging tech, backlit keyboard, and a fingerprint sensor housed under the power button. While the laptops will come with an Aluminium build, the company says that these will weigh at just 1.38Kgs. The laptops will come with a 180-degree hinge.

What we know is that this lineup was introduced with Intel’s 10th Gen core chipsets coupled with up to 16GB of RAM and 512GB of SSD storage. There is no clarity if the company plans to upgrade the chipset powering the laptops ahead of their India launch.

Honor – the challenge of creating its own indipendent identity

The Chinese smartphone maker has had a few troubled years recently highlighted by the US sanctions on its erstwhile parent company Huawei. However, after splitting from Huawei, the company has been slowly trying to claim its market share from the other Chinese brands like Xiaomi, Oppo, Vivo etc in China.

Since itis starting all over again, Honor hasn’t committed to launching any phone in the Indian market and has only added a couple of fitness-focused wearables apart from a laptop in the last couple of years.

This clearly means that, despite all the challenges, it doesn’t want to let go of the effort that the company has already put in in the Indian market before the ban.

However, smartphones are considered to be the entry point in any tech ecosystem and Honor isn’t ready to launch them in India yet. Hence, it would be difficult for the users to invest in a brand that isn’t fully committed to the market - especially without the financial and technical support from Huawei.