Huawei MateBook X Pro (2021) review: A fine laptop but it needs an overhaul

It says something about the speed of Huawei’s rise that just four years after the release of its first laptop in 2017, its products are now considered the equal of those from long-established players such as Dell, Apple, HP, Samsung and Asus.

For the last three years, Huawei’s pitch at the top of the laptop market has been the MateBook X Pro, a machine that from day one has been lauded by many as one of the better all-around ultraportable laptops on the market.

The MateBook X Pro – not the most elegant of names, I grant you – has now been given a 2021 refresh exactly a year on from the last update, with the aim of keeping ahead of, or at least neck and neck with, the increasingly stiff competition.

READ NEXT: The best laptops to buy today

The key change here is the introduction of Intel's latest 11th-gen Tiger Lake Core i5 and i7 processors. That aside, the 2021 Huawei MateBook X Pro is really more of a warm-over than a refresh.

The body, display and basic underlying specification all remain the same. It’s still a slim, light ultra-compact with a 13.9in touchscreen, a 1TB SSD, 16GB of RAM and a strong focus on productivity. The screen’s 3:2 aspect ratio means it’s better for wrangling spreadsheets and documents than watching widescreen videos.

If you want to know what we thought about the 2020 version of the MateBook Pro X, you can read our review here. The competition, however, has become fiercer since then.

Apple has cooked up a superb 13in MacBook range based on its own ARM processor, Razer has proved it can make an ultraportable every bit as good as its widely lauded gaming machines, and Dell has revised its evergreen XPS13.

It’s worth mentioning here that the previous generation MateBook X Pro is still available in both i5 and i7 guises for £900 and £1,100 respectively. That equates to a pretty substantial discount of £500 and £600.

The new model is scheduled to be released in the UK on 5 May for £1,599, although it is already available in China along with a cheaper Core i5 version and a Core i7 machine with a smaller 512GB SSD.

All of those machines have something to recommend them. The Razer Book 13 is an object lesson in how to design and make a modern Windows 10 ultrabook and has a funky RGB backlit keyboard, while the M1 ARM processor in the MacBook Pro has redefined what we can expect in terms of multicore performance and battery life in a laptop.

The Samsung Galaxy Book convertible has a stunning QLED display, a stylus and a 5G modem, the latter being a surprising omission from Huawei considering its background in mobile devices. The Dell XPS 13, meanwhile, is generally regarded as the best in class and is beautifully made and very stylish.

If those prices sound a bit too steep, the cheapest versions of the MacBook Pro 13 and Razer Book 13 ranges cost £1,300 and £1,200 respectively, while the entry-level XPS 13 is cheaper still at £1,000. The cheaper Core i5 (512GB SSD) version of the MateBook will hopefully appear in the UK in due course. I don’t know when or for how much, but expect something around £1,400.

READ NEXT: The best laptop deals

The MateBook X Pro range debuted at the 2018 Mobile World Congress, so it’s either a testament to the quality of the original design or a lack of originality at Huawei that the new – and technically, fourth – update is physically identical.

The headline stats are the same as the previous model. Luckily, they’re still impressive. The weight of 1.33kg is good for a 13.9in machine, and the dimensions of 304 x 217 x 14.6mm are still class-leading. The metal alloy body is as solid as ever, and the almost frameless display, which fills 91% of the lid (Huawei’s figure but it matches my measurements), still impresses.

The two colour options are a smart but rather unexciting space grey or emerald green.

I can see why Huawei hasn’t messed with the design. As an example of form following function, it has an almost Bauhausian purity to it. But for the fourth incarnation, surely a little more aesthetic pizzazz wouldn't have gone amiss?

As it stands, the MateBook is handsome, svelte and restrained, while the all-metal body gives everything a feeling of cool solidity and quality. However, it does all feel a little anonymous.

Flip up the lid and you’re faced with one of the better keyboards to grace an ultraportable. Spacious, solid and quiet, yet with a positive key action, it’s one of the best chiclet keyboards I’ve encountered recently. As you’d expect, it has a two-stage backlight, and above the top-right corner of the keyboard is a fingerprint scanner that’s both well positioned and perfectly reliable.

The trackpad is large for an ultraportable at 120 x 75mm. It feels great to the touch, but the click action at the corners is shallow and rather spongy. 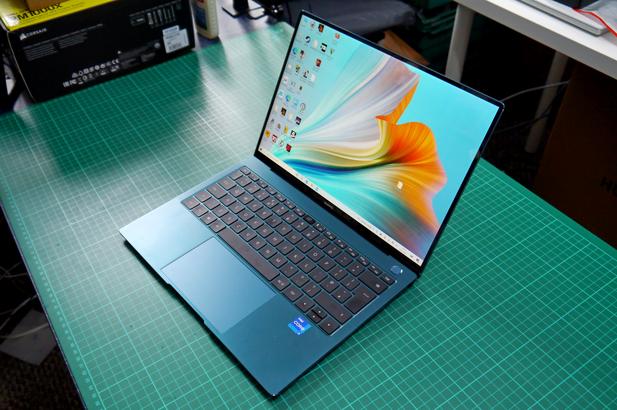 There is, however, one act of stupidity to the design in the form of the pop-up 720p webcam that hides between the F6 and F7 buttons. The upward viewing angle makes you look jowly (I need no help in that department) and gives those you’re talking to a clear view up your nostrils.

Worse still, when sitting at my desk the camera cut off the top third of my head. What’s more, if you type while on camera, your knuckles keep popping up into view. It’s a shockingly bad piece of design.

Connectivity is solid enough for an ultraportable. On the left are two Type-C ports and a 3.5mm audio jack, while on the right is a single USB Type-A port. All the USB ports are USB 3.2 Gen 2-rated, but in the absence of a DC input, you’ll have to use one of them to charge the laptop.

Usefully, there’s plenty of space between the two Type-C ports and both support Thunderbolt, although their operating speed is a bit of a grey area. Intel’s ubiquitous but capable AX201 Wi-Fi 6 card takes care of wireless coms and the Bluetooth 5.1 service.

READ NEXT: The best budget laptops to buy today

Beyond the obvious attractions of having a productivity-friendly 3,000 x 2,000 IPS 13.9in 3:2 display with a pixel density of 259dpi in such a petite machine, the screen is pretty good. That’s as long as you’re happy with a high-gloss finish.

Only “pretty good”? Well, the maximum brightness of 493cd/m2, 90.2% coverage of the sRGB colour gamut, contrast ratio of 1,440:1 and Delta E colour accuracy of 1.74 are not exactly bad, but the 2020 model tested better in every single metric. That’s disappointing, especially when rivals are beginning to offer P3-gamut displays.

The MateBook does have a few tricks up its sleeve, however. Drag three fingers down the screen and you can take either a full or a partial screenshot. It’s a feature I found more useful than expected considering Huawei refers to it, rather dismissively, as a “fun trick”.Even more usefully, the grab automatically copies any relevant text from the selected field to the clipboard.

Other special features are Huawei Share and Collaboration. These let you swap and manage files between your Huawei phone and your Windows desktop.

Think Apple AirDrop and you won’t be far off the mark. Just tap your phone on the NFC-equipped trackpad and the phone screen appears on the Windows desktop. The option to run three phone screens/apps on the desktop side by side is a new feature.

Of course, all this file- and screen-sharing malarkey was more of a selling point before Huawei and Google came to blows and sales of Huawei’s now Google-less smartphones fell off a cliff.

The four-speaker sound system – two of the speakers are situated near the front corners, while the other pair fire upwards at the sides of the keyboard – is very good, with ample volume and bass and even some stereo separation.

Both the processor and memory have been upgraded in the 2021 Huawei MateBook Pro X, so you now get a Core i7-1165G7 processor with 16GB of LPDDR4 4266MHz memory.

As you can see from our benchmark tests, the laptop performs much like all the other recent Core i7-1165G7 based machines we’ve tested. Only the Razer Book 13 has the Huawei beaten, thanks to its better thermal management.

Despite relying on Intel's integrated Iris Xe graphics processor rather than a discrete GPU like the outgoing model, the new machine is the more capable gamer. That’s because Intel's new GPU is considerably more powerful than the rather dated and gutless Nvidia MX250 graphics chip.

There’s little point in getting hung up on gaming performance on what is quite clearly not a gaming laptop, but with the resolution knocked back to 1,366 x 768, Doom ran at a consistent 45-50fps, which is good enough for me. Upping the resolution to 1,600 x 900 knocked the frame rate back to 35fps.

The 1TB MVNe SSD is a Samsung component and it's pretty speedy, with sustained read and write speeds of 2,589MB/sec and 2,498MB/sec respectively. Rather oddly, the SSD is divided up into a 120GB Windows (C:) partition and an 813GB Data (D:) partition, so you may want to pay close attention to what you’re storing where. I managed to fill the Windows partition with Steam files before I spotted the problem.

Incidentally, the SSD is the only component you can swap out once you manage to prise the back panel off.

Finally, the 56Wh battery (again, the same as the outgoing model) kept the lights on for 9hrs 43mins when subjected to our video rundown test. That's almost two hours better than the old model and broadly comparable to the Razer Book 13, which lasted 10hrs 48mins from a 55Wh battery but with a smaller, less pixel-dense display.

READ NEXT: The best laptops for students to buy today

The MateBook X Pro story is simple. An already very good ultraportable has just got a little better thanks to the latest Intel silicon.

The problem is that it’s the only major upgrade, and the display is actually a bit worse. The position of the webcam is still farcical, and the usefulness of the Huawei file- and screen-sharing technology is blunted by the fact that nobody is buying Huawei's Android smartphones at the moment.

Overall, then, it’s still good, but definitely in need of some overdue TLC.