There was a time, not so long ago, when it seemed that every manufacturer's goal was to catch up to the one ofthe best ultrabooks, the MacBook Air. The Huawei MateBook X Pro, when it debuted a few years ago, felt like it had. But in its 2021 iteration, the laptop, starting at €1,399 (and will eventually be on sale at Amazon in the US, we're told), is still mostly an internal change. It comes in a beautiful teal color, and remains sleek and lightweight. The 3:2 display, which once differentiated it, is more common now, but still good to see. But the big change this year is that Huawei bumped up the processor to an Intel Core i7-1165G7.It's unclear exactly when the MateBook X Pro will come to the U.S., but it is available in China and parts of Europe, with Huawei promising availability through Amazon. While it's nice to look at and offers decent performance for its class, it no longer differentiates itself from other Windows PCs to make it worth the trouble to import.Editors' Note: Huawei was able to provide information about one of our biggest worries about the MateBook X Pro, which was warranty support. That section has been updated, and the score was bumped to from 3 to 3.5 stars.

In some aspects, Huawei is undeniably copying its designs from Apple's MacBook Pro. But in others, it goes beyond.

I was slightly surprised when I took the MateBook out of the box to find just how teal it is. Huawei calls this hue "emerald green," but as someone who has played far too many Sonic the Hedgehog games, I can assure you that this is not emerald. Still, the teal shade is striking, and more than one person told me they would consider buying a notebook in the shade. Apple would never (or, at least, hasn't in a long time. Get me a Bondi blue MacBook!).The all-metal casing feels solid. The lid has Huawei's name in bold, capital letters. It's clean, though I do wonder if Huawei might have done better with its flower-shaped logo on the lid.

Lifting up the lid reveals a spacious, 13.9-inch display in a 3:2 aspect ratio, with minimal bezels. If you want to focus on nothing but the screen, that's easy enough.The teal coloring continues on the keyboard deck, which contrasts with the black backlit keys. There's a fingerprint reader on the power button. The eagle-eyed will notice that there's no webcam above the display. Instead, it's hidden under a dedicated key on the keyboard between F6 and F7, which is sure to look straight up your nose.

As is the trend of late, this thin notebook doesn't have much going on in the way of ports. On the left side, there are a pair of USB Type-C ports, one of which you'll use for charging. Notably, they're not Thunderbolt 4, even though the 11th Gen Intel processor Huawei is using supports it.

A representative for Huawei told Tom's Hardware that the "MateBook X Pro features two USB-C ports with the same full-function as Thunderbolt 4. The ports can be used for dual-way data transfer at up to 40Gbps, as well as for charging and display. The laptop can be connected with 4K displays, high-end graphics cards, high-speed hard discs, etc. It also supports fast charging for other devices.”

Additionally, there's a 3.5 mm headphone jack. On the right side, there's a single USB Type-A port, giving this laptop slightly more room for peripherals and accessories than theMacBook Pro with M1.

The 2021 iteration of the MateBook X Pro bumps the processor up to Intel's Tiger Lake lineup. We tested with an Intel Core i7-1165G7, paired with 16GB of RAM and a 1TB PCIe m.2 NVMe SSD. 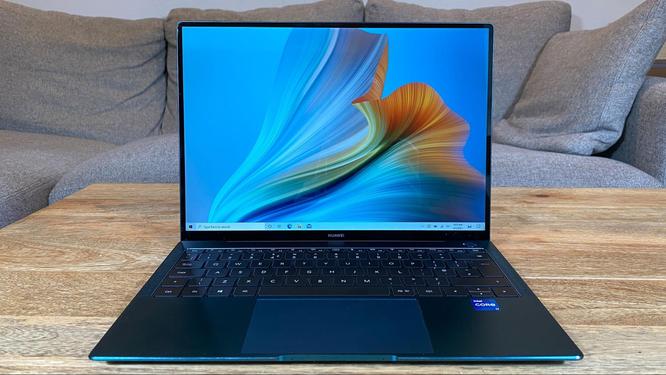 We also ran the MateBook through our stress test. It ran Cinebench R23 on a loop 20 times. It started at a high score of 4,142.78 before largely flatlining in the mid3,700's. The processor ran at an average of 2.31 GHz with an average temperature of 73.74 degrees Celsius (164.73 degrees Fahrenheit). HWInfo reported some instances of thermal throttling.

With the MateBook X Pro, Huawei has gone with a 13.9-inch touchscreen with a3:2 aspect ratio, which I prefer on productivity-focused laptops because it shows more while you scroll less. This one has a 3,000 x 2,000 resolution.

I used it to watch an FHD trailer for The Suicide Squad. In it, Harley Quinn's red dress popped against a white building, but darker shades, like King Shark's blue and gray, well, shark body, didn't stand out amongst some green trees without the brightness being turned up as high as possible.Huawei's panel covers 74.7% of theDCI-P3color gamut, falling short of the MacBook Pro (78.3%) but head of the XPS 13 (69.4%). The HP Spectre x360 14's OLED display, at 139.7%, blew away the pack).The screen measured an average of 464 nits of brightness, just behind the XPS 14. The MacBook hit 435 nits, while the Spectre came in at 339 nits.

Keyboard and Touchpad on the Huawei MateBook X Pro 2021

We tested the Huawei MateBook X Pro with a UK-style keyboard. Huawei hasn't informed us whether or not a US version will also be available. Those who use a UK keyboard often may be able to deal with the layout, but those used to other styles may have issues with key placement, as well as the shortened left shift key.

The backlit keyboard is shallow and feels a bit mushy rather than clicky. It reminded me a bit of the old Apple butterfly keys, which I could get used to, but many couldn't get past (andApple gave up on that, too.) I hit 108 words per minute on the 10fastfingers.com typing test, though with a higher error rate than usual.Huawei's touchpad, too, is much like Apple's. It doesn't mechanically click, but rather senses pressure and provides force feedback. It's spacious enough at 3 x 4.5 inches, and with Windows precision drivers, it worked well with multi-finger gestures. My finger sort of dragged across it, though, and even with the Huawei Free Touch software to customize it, Apple is better at faking the feeling of a mechanical click.

The Huawei MateBook X Pro includes four speakers, two of them top-firing, making for clear audio considering the notebook's tiny size. I blasted Franz Ferdinand's "Take Me Out" like it was 2009, and for the first time in a while on a thin laptop, I heard a bit of bass. The vocals were clear and the drums kicked. At the highest volumes, however, the speakers became distorted, but you can listen more than comfortably at mid range volumes.

Huawei preinstalls Nahimic for audio, so you can change between music, movie, communication or gaming presets. For those who want true customization, there's an equalizer you can mess around with.

To be truthful, we didn't get the MateBook open. It has eight Torx screws on the bottom of the notebook. While some came up easy, at least two of them felt quite glued in, and using a screwdriver started to leave shavings behind — a sign of cheap screws. Continuing the attempt could have damaged our review unit.

You can trust the MateBook X Pro to last for a full workday on a charge, but some competitors offer more endurance. It lasted for 10 hours and 21 minutes on our battery test, which makes laptops run OpenGL tests, browse the web and stream video, all while connected to Wi-Fi with the screen set at 150 nits.That's a bit behind the XPS 13, which ran for 11:07, while the MacBook with Apple's M1 processor ran for an astounding 16:32. The HP Spectre x360 14 ran for 7:14, though would likely run longer with a non-OLED display.

On the underside of the laptop, the hottest point measured 39 degrees Celsius (102.2 degrees Fahrenheit).

In perhaps an overly clever move, Huawei has hidden the 720pwebcamin a button on the keyboard. Between the F6 and F7 keys, there's a button with a camera icon. Pressing it pops the camera open, and you can press it down for privacy. It's not a kill switch, though, and if you leave it down and turn the camera on, you'll just see darkness.

The angle from the keyboard destines the 720p webcam to give an unflattering view of your chin or your nostrils (or both!).When I tried the camera while sitting at my desk, I found that the photo was also grainy. I could easily make out individual pixels. And if you put your hands on the keyboard while you chat, you end up with your knuckles on Zoom.This is, ultimately, a more workable angle than having it on the hinge itself, but after using a webcam daily for a year for work during a global pandemic, it's ultimately poor placement. Some may appreciate the ability to easily block the webcam for privacy, however.

Software and Warranty on the Huawei MateBook X Pro 2021

Interestingly, the MateBook X Pro came without much of the usualWindows 10bloatware. Sure, there's a trial for Office, but there was nothing like Spotify, Roblox or the other usual junk I would suggest people delete if they don't want.Huawei itself doesn't include too much on top of Windows 10. There's a link to a PDF manual on the desktop as well as a video on using Huawei Share, which lets you connect certain Huawei and Honor phones to your laptop to share data over Wi-Fi, Bluetooth, and NFC. (For those in the U.S., this is essentially useless, as the phones are rarely sold here anyway.)There are two major pieces of Huawei software. The first is PC Manager, which starts and runs automatically unless you change it. It shows you available drivers, lets you connect to Huawei phones, run hardware checkups, and quickly and easily check your serial and model numbers.The other is Huawei Free Touch, which lets you adjust the pressure sensitivity and vibration strength on the touchpad. Like Apple's MacBooks, it doesn't have a physical click, but instead uses pressure and force feedback. I'm of the opinion that the default settings feel most natural, but I could see an argument for lowering the pressure.

We tested the MateBook X Pro with an Intel Core i7-1165G7, 16GB of RAM and a 1TB PCIe m.2NVMe SSD. US pricing and availability weren't immediately available, but in Europe, the laptop will start at €1,399 in markets such asGermany, Italy, France, the UK and Spain. That may be for the Core i5 version, which Huawei also lists as an option on its website.Huawei told Tom's Hardware that the laptop should be expected sometime this year on Amazon, which was where you could purchase previous models.

If you want a sleek laptop that will stand out due to a beautiful color, the MateBook X Pro 2021 is for you. But while Huawei is promising that this will come to the U.S. via Amazon and to European markets soon. Currently, it's available in China, Germany and Italy via Huawei's store.

The webcam, once novel, now feels a bit like a relic, unless the privacy you get from putting the webcam in the keyboard is a bonus for you. Dell has miniaturized the webcam in the XPS 13, and it's time for Huawei to follow.

There's no denying that Huawei has one of the prettiest designs in the Windows world, and the power of the Intel chip delivers. But it isn't differentiated enough from other great notebooks like the Dell XPS 13 or HP Spectre x360 14 to be worth hunting down from abroad, nor does it have the performance gains from the company it's chasing — Apple — and it's M1 chip. That puts what is a nice laptop in a hard position.