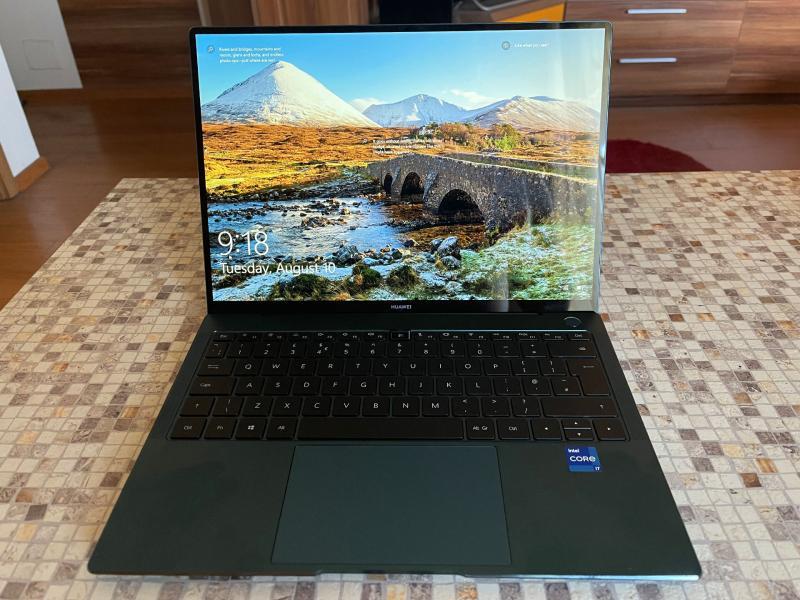 There’s just something about the HUAWEI MateBook X Pro which has “love at first sight” written all over it. We pretty much felt the same about the 2020 model, and the ones before it. Don’t get us wrong, at a first uneducated glance, its performance numbers match, at least on paper, those of the HONOR MagicBook 14 (2021) we reviewed last month, but the MateBook X Pro is just so much more.

Even though they are similarly equipped, they address two different target audiences, with two different price points. And, since they perform fairly similar, it’s just fair we put this year’s MateBook X Pro to the test and see where it stands out. This is our HUAWEI MateBook X Pro 2021 review.

Why change something that has proven to successfully work? This is probably what engineers at HUAWEI had in mind when discussing the design of the 2021 MateBook X Pro, which went pretty much unadulterated for the past couple of years, and this is a good thing! It’s still as minimalistic and gorgeous as it ever was, and there’s absolutely no need to change that.

Mystic Silver is the third color available last year that didn’t make it to 2021. Instead, there’s a Space Grey and an Emerald Green (our unit) in the line-up.

With the same precision machining and crafting as the predecessor, the 2021 MateBook X Pro didn’t gain any pandemic weight, maintaining it at 1.33kg. Measurements are the same as well, with the computer maintaining its fitness at 14.6mm in height (thickness).

With no noticeable changes, you can expect the same chamfered edges that light nicely bounces off of, with a nice shine to it. You can find these around the edges, the trackpad, and the power button. Similar to last year, the power button includes a fingerprint scanner that has a cache, enough to hold on to your fingerprint and unlock Windows with a single touch of the button upon powering up.

Underneath the power button lies the precision, full-sized, Chiclet Keyboard, with a fine speaker grill to its left and right, containing a total of four (2 x 2) speakers, that cooperate with the 2 microphones. A considerable part underneath is taken up by the upgraded Touchpad with Multi-touch — the HUAWEI Free Touch — and this year, with HUAWEI Share built-in (more on that later).

Viewing angles have been retained at 178 degrees, which is really something, as well as touch features via 10-point multi-touch sensitivity. Not only that, but HUAWEI got rid of everything else around the display, achieving a whopping 91% screen-to-body ratio, which you really have to experience in person to appreciate.

That means, subsequently, that the webcam, a 1MP 720p unit, is still inside the keyboard. The infamous “nosecam” has its advantages though, as tucking it in the body of the device makes hacking it, and subsequently your privacy, impossible.

8- and 16GB memory options are available, with the unit you see in the pictures having 16GB of 3733MHz RAM, and 1TB NVMe PCIe SSD (a version with 512GB is also available for you to configure if you need less storage and want to lower the price of the device).

Graphics are handled by the integrated Intel Iris Xe Graphics, which is a step-up from last year’s dedicated NVIDIA GeForce MX250.

The battery is rated 56Wh, and the connectivity is handled via Wi-Fi 802.11 a/b/g/n/ac/ax, and Bluetooth 5.1. There are two USB Type C ports, for charging and connecting a display, a full-sized USB A 3.2 port, as well as a 3.5mm headphone jack that doubles as a microphone input port. Of note is that you don’t have an HDMI connector, so keep that in mind when selecting external monitors or cables. You will need a USB Type C connectivity solution.

Just like its predecessor (and the models in the line-up), the 2021 HUAWEI MateBook X Pro runs Windows 10. It’s the Home Edition that pops-up with the configuration screen out of the box, and HUAWEI added little to no bulk to it. Not that there wouldn’t be enough space on the generous 1TB storage drive, but this is pretty much how I’ve seen HUAWEI roll in the past. Keeping things as simple as possible.

A few firmware and software updates await for you to apply after your first setup, and that’s pretty much the entire effort you need to put into having a buttery smooth Windows 10 experience. We need to mention that the laptop is eligible for a Windows 11 upgrade, and no doubt it will handle it beautifully.

Those of you who owned previous generation MateBook computers will be familiar with the PC Manager suite. For those of you who are new to it, this application makes sure your drivers are up to date and helps you connect a HUAWEI (or HONOR) smartphone to your PC. 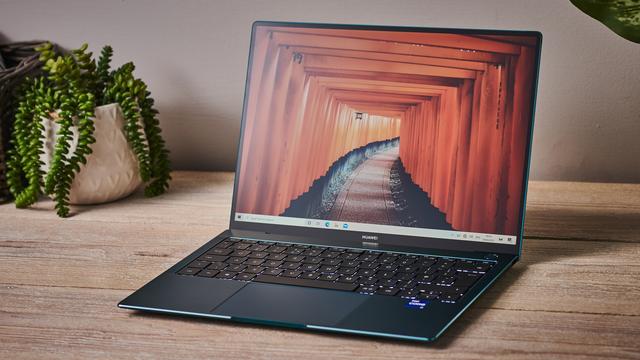 One of the novelties this year on the Pro model is that you no longer have the NFC sticker on the palm rest next to the trackpad. HUAWEI embedded it into the trackpad itself, a trackpad that has also been upgraded on the Pro line-up. It now features haptic feedback (called Free Touch) for a more precise feel and exquisite experience. Both of these features debuted at the end of last year on the MateBook X (sans Pro).

We went on a short hardware tangent there, but it made more sense to mention all of this while talking about the PC Manager.

We described the PC Manager and the entire “connecting your smartphone to your laptop” experience ad nauseam. In a nutshell, you get Multi-Screen collaboration with mirroring displays, copy-pasting content and images between devices, taking calls, sending texts, and more. Check out the details of that in our original MateBook X Pro review from 2020, this current one’s predecessor.

Not much else to mention on the software end, and, I can’t stress this enough, this is a good thing. At the end of the day, it’s a pretty vanilla Windows 10 experience, with the occasional frustration of compulsory and sometimes lengthy restarts upon system updates, but that’s a Microsoft issue, not a HUAWEI one.

Describing the experience using the 2021 MateBook X Pro is close to driving a fine, luxury, sports car. Everything just runs (literally, really fast!) smoothly, from the moment you unbox it, through the setup process, to the day-to-day operations and activities.

We’ve used this particular model as our daily driver for over a month, with some occasional breaks in-between.

The display is, simply put, gorgeous. The colors are rich, the blacks are deep, the contrast is spot on, brightness is enough for visibility even on the brightest outdoor days. If I was to nitpick, my only critique would be with its reflective nature. If you have a bright light behind you, it might make things a little difficult to discern on the reflective display.

Touch sensitivity is more than accurate (though I still can’t wrap my head around touch capabilities on a device that doesn’t fully convert into a tablet or handheld).

The keyboard is very pleasant and silent to type on, with enough key travel to get an actual feel for the keys you’re pushing down. Backlight is also nice, with no bleeding, and at times even too bright at its highest setting.

Probably my favorite component to input is the trackpad. Haptic feedback emulates an actual click/push down so well, and the feedback is so natural, that you’ll instantly love it. It will take a couple of minutes to get used to it, but once you do, you’ll love it!

The four speakers are pretty loud. While lacking a bit on the low end, which is normal considering their size, they’re loud, crisp, and clear, with no distortion even at high volumes.

With decent display brightness – by decent we mean normal usage, not forced maximum of 100% just for the sake of it – we got through one full workday and some relaxation at the end of it without an issue. And that is really something, as my workdays are not your regular ones, stretching towards 16 hours. Increase the brightness and do some heavier, more power-intensive tasks, and you will need to have a charger handy to make it through the day.

The system runs cool with only occasionally getting warm enough for the fans to kick in, and that’s mostly during gameplay, video rendering, or other intensive tasks.

Overall, it’s a great experience, to sum it all up.

Nothing we threw at the 2021 MateBook X Pro made it stutter or managed to bog it down. It was chewing through tasks like the champ it is. App load times and even Windows boot-up are pretty fast, and overall operation is buttery smooth.

Office tasks (document management, emails, browsing, virtual calls, and everything in between you might do for work) are most of the times instant, fast at worst. Now, if you are doing heavy image manipulation, video rendering, CAD, or other demanding tasks, it will get the job done, but it will, as common sense implies, take more time.

Here at Pocketnow, we’re more inclined towards judging a product’s performance based on real-life operation, rather than numbers. However, for those of you who need to have analytic data based on benchmarks, we ran a couple and included the results above for your viewing pleasure.

– pop-up webcam angle is sometimes awkward. If it matters to you, buy an external webcam;– reflective display doesn’t make it the perfect outdoor laptop on a sunny day;– you’ll need to import it if you’re in the U.S.

We have no reservations in recommending the 2021 MateBook X Profor those who want a beautiful laptop that’s fast, lightweight, portable,and, most importantly, future proof thanks to its great specs.

The 2021 HUAWEI MateBook X Pro is not for everyone. It’s the premium flagship laptop from the company, and it is also competing with the Apple MacBook Pro. That being the case, you should also expect a steeper price HUAWEI is asking for. It is not prohibitive, but it’s in the premium segment.

The 2021 HUAWEI MateBook X Pro goes for anywhere between €1.399,00 and £1399.99, depending on the region. Also, depending on where you are you might only have an option for the Core i5 version. Your configuration, based on processor and storage, will of course influence the price, and, depending on which country you are in, HUAWEI is running different discounts. Best to consult your local HUAWEI store for the price available to you.

All that being said, we have no reservations in recommending the 2021 MateBook X Pro for those who want a beautiful laptop that’s fast, lightweight, portable, and, most importantly, future proof thanks to its great specs.