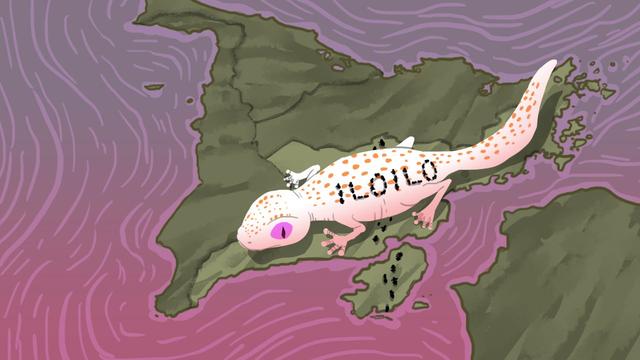 Iloilo City in the late 19th to early 20th century was second in economic importance to Manila. Opened to world trade in 1855, it had many foreign businesses and consulates. Photographs then show a bustling port area, grand dwellings, and wide avenues. The decade 1895-1905 was tumultuous – the revolution, Spanish exit, and the start of American occupation.

There are views of Iloilo of that era which are not always complimentary, cloaked with biases and prejudices. The most fascinating are those of Dean Worcester, Emily Conger, and Mrs. Campbell Dauncey.Their accounts offer a vivid portrayal of the times.The books are downloadable fromwww.gutenberg.org. I have edited quoted text for brevity.

Zoologist, cabinet official, and entrepreneur who shaped US public opinion and policy about the Philippines

Worcester’s kilometric-titled book, The Philippine Islands and their People: A Record of Personal Observation and Experience with a short summary of the more important facts in the History of the Archipelago was published in 1899.Worcester first came in 1887-88 with a zoological expedition. In 1890 he returned and stayed three years. When the Americans took over, he was appointed to the Philippine Commission, and became Secretary of the Interior.He was a remarkable photographer, a firm believer in American imperialism and portrayed Filipinos as an exotic, inferior, less civilized race.Of Iloilo, he writes:

“Iloilo is the second city of the Philippines in business importance, having outstripped Cebu and rapidly monopolizing the commerce of the central Philippines…. It lies close to the seashore, reached by a sluggish creek, which has been dredged to admit island steamers.Large vessels must lie in the channel outside…. There are no defenses worth mentioning…. The place is by no means attractive.It is built on low, flat ground much of which is filled swamp land.The unpaved streets are always dusty or muddy, the lack of public conveyances a great nuisance.The church is ugly and the public square, once handsomely laid out, was serving as a goat pasture.There are no places of amusement. One sees a few good shops and some pleasant residences…. The business interests of the place are almost entirely in the hands of the English and German firms…. Sugar is the main export and the whole town smells of it.”

Worcester’s focus makes interesting reading, with an appendix describing natural resources. After leaving the colonial government in 1914, he became a pioneer in the coconut industry.

In 1899-1901, Emily Branson Conger visited her son, Lt. Arthur Conger, who was stationed in Jaro. She volunteered her services for the US troops during the Philippine-American war.Her 1904 book, An Ohio Woman in the Philippines: Giving personal experiences and descriptions including incidents of Honolulu, ports in Japan, and China also shaped public opinion in the US about the Philippines, since there was little information available then to the general public.

She has a more favorable view of Plaza Libertad, and describes some of the battles between the US forces and the independence fighters:

“…In the center of the town is the plaza (park). Here, the stars and stripes was unfurled. The quarters of our soldiers were nearby, they had a pleasant place to lounge when off duty. When our troops first landed in 1898 there was quite a battle…. The native army set fire to the city before fleeing across the river to the town of Jaro. The upper part of the buildings was burned but the lower part remains. After the battle at Jaro, I lived for a while in the officers’ quarters…. The war was still on, for day and night, the rattle of musketry told that somewhere there was trouble.”

Conger describes her first encounter with a “tuko,” decries the quality of native horses and cats, and then talks about the various pests – rats and roaches, and pest control, which involves mongooses and snakes!

“…My first evening in Jaro was one of great fear. We were told that we were to be attacked and burned out. At dinner I heard a fearful noise that sounded like “Gluck-co-gluck-co.” An American officer told me it was an alarm clock, but in fact it was an immense lizard, an animal for which I soon lost all antipathy, because of its appetite for bugs. Unfortunately, they have no taste for the finger-long roaches…. Neither were they of assistance in exterminating rats, mice, or ants. The ants! It is impossible to describe how these miserable pests overran everything.…. The animals are all diseased, especially the horses. Our men were careful, keeping their horses far from the native beasts. Cats are utterly inferior. The mongoose, a little animal, is very useful; no well-kept house is without one. Rats swarm in hordes; the mongoose is absolutely necessary to keep them down. Still more necessary is the house snake…. Mine used to make havoc among the rats up in the attic…” 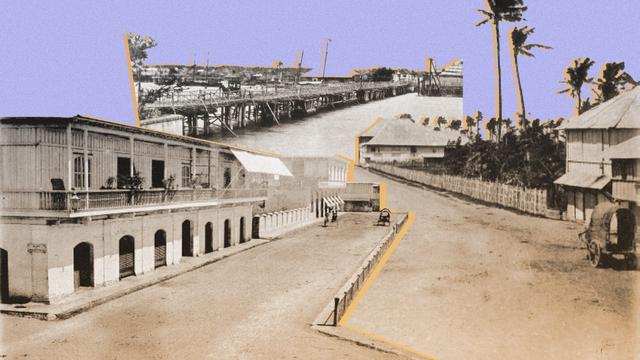 “…We visited places for weaving, and saw the most wretched-looking old women handling the hair-like threads. These poor, dirty, misshapen creatures, weaving from daylight to dark, earn about 50 cents a month. Many are deformed and unclean, both makers and sellers, it seemed incongruous that they should handle the delicate materials. I saw just one nice, clean woman of the lower classes. In our country we do not see a whole class of people diseased or maimed. In the Philippines one seldom sees a well-formed person; or if the form is good, the face is disfigured by smallpox.”

Book photographs include the 1901 surrender of Gen. Delgado to the Americans, Jaro at the time of the visit of Taft, and the Oton cathedral, but the photo labeled “interior of the Oton church” (page 176) is erroneous; it is the Molo church in the photo.

A witty, well-traveled Englishwoman and her letters back home

The third, and most entertaining, is Enid Rolanda Gambier aka Mrs. Campbell Dauncey, who lived in Iloilo between December 1904 and August 1905. An Englishwoman in the Philippines (1906) is a series of 48 letters. Mr. Dauncey may have been both a businessman and consul.They were at major events, and had audiences in Malacañang with Governors General Wright and William Howard Taft.

In her introduction, she notes: “… I wrote to the best of my power, faithfully and impartially; aiming at a plain account of scenes and conversations, which would convey a true and unbiased impression of what I saw…”

Notwithstanding claims of a “plain account” and “true and unbiased impression,” the book is colorful, condescending and opinionated. Several times I had to laugh out loud at her descriptions.

On her maiden voyage to Iloilo, she manages to skewer American soldiers, teachers, their manners, and their English.

“Our fellow passengers are Americans, half of them military, who address each other in most unceremonious fashion, and the rest school teachers… the American scheme is to educate the Filipino for all he is worth, so that he will be fit to govern himself according to American methods; but at the same time they have soldiers to knock him on the head, if he shows signs of wanting his liberty before Americans think he is fit for it. A quaint scheme, and one full of the go-ahead originality of America…. What puzzles me are these pedagogues, who are honest, earnest, well-meaning folk, but their manners are those of European peasants. The language is so unlike English and difficult to understand…. Yet I could forgive them their dreadful lingo, if only they would not use the same knife indiscriminately to lap up egg yolk, or help themselves to butter or salt…. These good people are fresh from America, and utterly ignorant of all things and people outside their native State, full of blunders…. It seems a pity that such rough diamonds should represent to the natives the manners and intellect of a great and ruling white nation.”

Her first impression of iloilo:

“…It did not look at all inviting. Iloilo is crammed down at the edge of the sea, many of its suburbs nothing but sandy beach…. A big town, with long, straggling streets, and the houses, two stories high, with grey corrugated iron roofs…. The buildings totally devoid of any architectural beauty…”

“…Some of the shops have big, handsome glass windows, with wonderful things displayed, but inside you find nothing but a large half-empty hall, where languid, sallow Eurasians stand trimming their nails behind long, untidy counters. These are the Spanish, Filipino, and German shops; the Chinese are just the reverse, with no show in the little window, and a small room, crammed with everything any human ever invented, kept by energetic, slant-eyed men who simply won’t let you go without buying something…. The principal shop is the great store, Hoskyn & Co., said to be the best in the islands…

“…Half the time servants are ill with fever, colds, or heaven knows what, it is a race without much stamina…. One of the most aggravating characteristics is the way they murmur, with naturally soft voices, which become a whisper with shyness and awe.English people call servants “boys,” but Americans use the Spanish word muchacho…unfortunately, they give all vowels the narrow, English value, making it muchaycho. It sounds so odd, altering Spanish names — saying Cavyt for Cavite, Caypiz for Capiz…. Thank goodness they don’t call this place Eye-low-eye-low!”

Going about in the late afternoons and early evenings to neighboring towns was a favorite pastime. “…Everyone drives top-speed, Filipinos crawl about the roads, and never dream of getting out of the way unless one shouts out— “Tabé!”—when they just move enough to avoid instant death like a matador in a bull-fight. Curiously we have more trouble with the natives who are walking towards us instead of those going the same way. That may sound incredible, but if you knew the Filipinos you would understand that it could not be otherwise. This element is very exciting, and makes an ordinary evening-drive to Molo better than a trip on a fire-engine in Piccadilly…”

The book’s closing paragraph summarizes her largely negative impressions. She is horrified at how animals are treated:

“So what am I to say of the Filipinos? Those I met, and my servants, were a narrow, cunning, good-humored people, vain, superstitious, stupid, great gamblers, kind to their children, and bitterly cruel to animals — oh, the poor hens hung up by the heels!The wretched pigs, feet lashed together. scorching in the Molo Plaza! The awful sores under the harness of the starving ponies! The brutal, sickening, cock-fighting! For those horrors alone, I should be thankful to leave this country…. The laziness, heat, apathy, and cruelty of the East, without the compensations of artistic beauty, cheapness, plenty, and luxury, which make up for those drawbacks in other hot countries. A shuffling, drab, discontented, thick-headed, costly East — with all the worst traditions of 400 years of the off-scourings of the Spanish monkish orders, overlaid by a veneer of shallow cock-sureness hastily assimilated from a totally incongruous alien civilization….”Oddly prescient of a much later description of Filipino culture: “400 years in the convent and 40 years in Hollywood!”

Both ladies delve into identical aspects of daily life in Iloilo – religious processions, one-upmanship between Catholic and Aglipay church ministers, markets, attire, native fruits, tuba, carabaos, paraws, music, funerals, and Filipino love of bathing.Both had mongooses and snakes, and were startled by the “tuko.” Dauncey’s astute commentary on US colonial policies, her descriptions of a visiting Italian opera troupe, cinema-going, “rigodon” dance, and what might be an early Ilonggo zarzuela – will enchant fans of the arts and history of Iloilo. – Rappler.com

Vic Salas is a physician and public health specialist by training, and now retired from international consulting work. He is back in Iloilo City, where he spent his first quarter century.