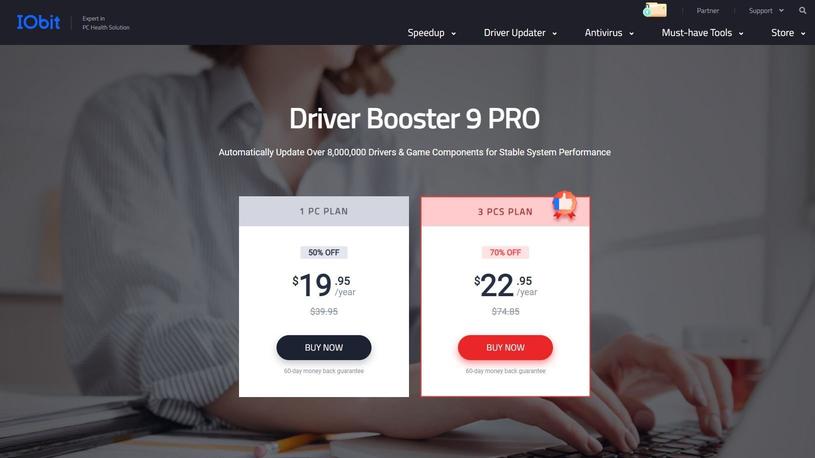 IObit Driver Booster is a PC optimization tool made by IObit, an American software company. Apart from Driver Booster, IObit has many other products, including a software uninstaller, VPN, screen recorder, antivirus, and more.

IObit released the first Driver Booster a long time ago and has released many more updated versions. This review is for IObit Driver Booster 9, released in 2021. We’ll judge it based on specific criteria, including features, pricing, compatibility, ease of use, etc.

Anyone can download a free version of the IObit Driver Booster, but it has limited functionalities. You’ll need to pay for the premium version to make the most of Driver Booster.

The premium version is available through an annual subscription, with two different plans according to the number of supported PCs. You can get a yearly subscription covering 1 PC for $19.95 and 3 PCs for $22.95. Note that these are discounted rates for first-time users. In the ensuing years, you may end up paying the regular price, which is $40/year for 1 PC and $75/year for 3 PCs.

The premium version has a 14 days trial period you can utilize. IObit also offers a 60-days money-back guarantee for every purchase.

IObit Driver Booster 9 includes a number of useful features designed to help your PC run at optimal performance including:

This is the first and foremost feature of IObit Driver Booster 9. It scans all your computer’s drivers and reports back which ones are outdated or missing. Afterward, you can download the newest versions for the outdated ones or new ones for the missing ones. This software checks your drivers against a vast database of over 8 million drivers.

You can constantly update your computer’s drivers and boost its performance with this feature.

IObit Driver Booster lets you backup your drivers and restore them where needed. This feature is essential because some driver updates can cause malfunctions. In such a case, you’ll just need to revert to the backup version and have your PC perform as usual. 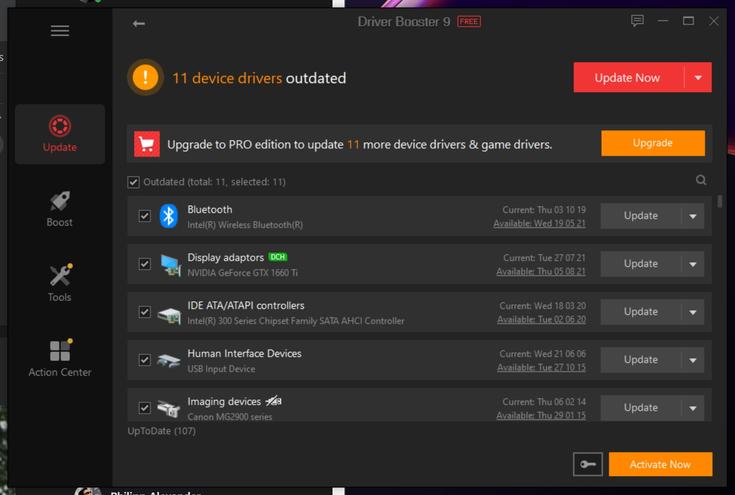 Junk files could be software leftovers, temporary folders, random executables, thumbnail caches, etc. What’s common among them is that they slow down your computer.

This feature enables you to collect and display detailed information about your computer.

Driver Booster has tools to fix common problems you encounter when using your computer. Such issues include network failure, wrong resolution, no sound, device error, and so on.

You can set schedules for Driver Booster to automatically scan your computer’s drivers. For example, it could be daily, weekly, or whenever your computer boots up.

This feature stops all unnecessary apps from running during gaming to have the best gaming experience.

Interface and in use

IObit Driver Booster 9 is relatively easy to download and use. We downloaded the setup file directly from the official website with no hassles. Afterward, launching the setup file and installing it on our computer took less than five minutes. We began using the tool right away.

IObit Driver Booster 9 has a dashboard from which you can observe and control all its features. After opening the app, the first feature you’ll notice is the “scan” button that lets you run a check on all your PC’s drivers.

There are two other tabs labeled “Boost” and “Tools”, where you can find all the other features.

There are many driver management tools out there. IObit Driver Booster is one of them and a perfect one. It has the necessary features to ensure you continually update your drivers. However, if we could change something, we’ll make it available for other operating systems apart from Windows.