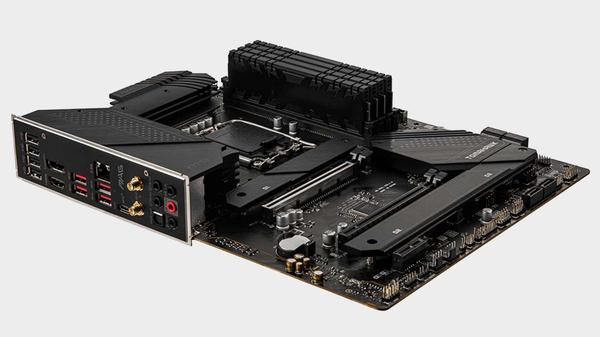 The quality of Intel motherboards with its B series chipsets have taken a genuine step forward since the introduction of the last-gen B560. Many of them now, like the MSI MAG B660 Tomahawk WIFI DDR4 we’re reviewing here, carry feature sets that would have been restricted to high-end boards just a couple of years ago.

Simple economics may have played as much of a part as anything else. Of course, there are still cheap and basic B660 boards that you wouldn’t dream of pairing with an Intel Core i9 12900K, but given the steep cost of high end Z690 boards, a gap has opened up in the in the lower mid range that’s now taken up by premium B660 boards and low cost Z690 boards.

These days it’s entirely possible to grab a good quality B660 board with a strong VRM, fast networking, comprehensive connectivity options, and cooling that won’t have any problem with a high-end processor. Add in the all-important high-speed memory support, and you’ve pretty much got everything a gamer needs apart from CPU overclocking support. Which, y'know, no-one needs.

Unless you absolutely, positively need four or more M.2 slots, or you run several add-in cards, the B660 chipset is worthy of serious consideration.

The B660 Tomahawk clearly takes some aesthetic inspiration from MSI’s Unify range. Both share a black, RGB-less design that will easily blend into most systems. There are four RGB headers, including two that are addressable, so RGB is there if you want it. The Tomahawk comes with three PCIe slots. The primary slot is a x16 slot that supports PCIe 4.0, the second is a x16 slot (x4 electrical) that supports a PCIe 3.0 and finally there's a PCIe 3.0 x1 slot.

PCIe 5.0 support for the primary slot would have been nice, though that's not likely to deliver any tangible benefit for GPUs for the forseeable future. 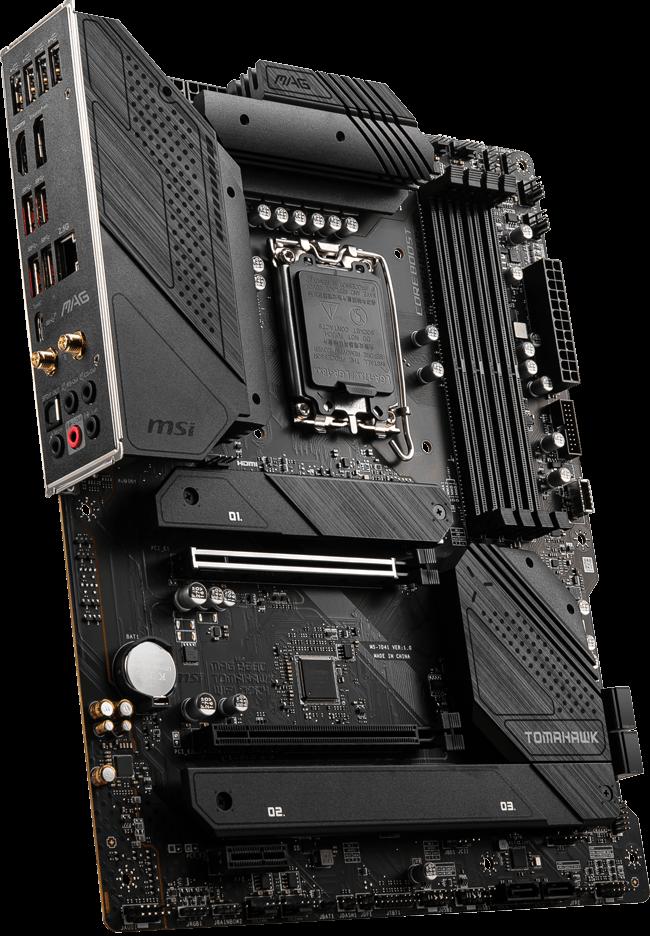 The Tomahawk will accept up to three M.2 drives, all of which are cooled by a heatsink. Two of them support PCIe 4.0 x4. The third slot supports PCIe 4.0 x2. Three slots will be sufficient for most users, but if you want four or more, you’ll have to go to Z690. Don’t forget the six SATA ports too.

The overall layout appears solid. The area under the primary PCIe slot is refreshingly free of M.2 slots ripe to get roasted. SSDs there can get stupidly hot under a GPU. There’s a USB Type-C case header and we count five fan headers plus two more for the CPU and AIO pump. In short, this is no budget feature set, and that extends into the power components, too.

MSI’s Tomahawk motherboards have a reputation for their strong VRM solutions and the B660 entry continues this tradition. It includes a 12+2 phase VRM powered by dual 8-pin power connectors. Bearing in mind that overclocking is not allowed on B660 boards, all it has to handle is the maximum turbo load of a 12900K. It won’t have any problem with that, we assure you. It’s all cooled by chunky black heatsinks. For our review we used an Intel Core i5 12600K, a chip more likely to be paired with the mid-range chipset. This resulted in a VRM load temperature of just 47°C. Though we use an open test bench, even if you add 30 degrees or more, that’s still well within range.

The rear I/O is another definite highlight of the board. You get Realtek 2.5G LAN and Intel WiFi 6 which will handle the networking needs of most typical users. There are nine USB ports made up of four USB 2.0, four 3.2 Gen 2 ports and a 3.2 Gen 2x2 20Gbps Type-C port. It's good to see 20Gbps USB begin to filter down market, too. There’s also a full set of audio ports with S/PDIF. A Realtek ALC1220 chip takes care of audio duties. Finally there's HDMI 2.1 and DP 1.4 ports should you wish to use Intel’s Xe integrated graphics.

In terms of overall performance the MSI B660 Tomahawk ran pretty much as I would expect. Its gaming performance is right alongside other DDR4 boards.A couple of the system benchmarks were a tiny bit behind, but these are mostly within a margin of error and might come down to a couple of varied memory sub timings.

As a side note, we also took the opportunity to retest the 12600K with a fast set of DDR5-6000 and noted that performance has definitely improved when compared to early BIOS. But still, if you’ve got a decent set of DDR4 from your last build, you’ll save several hundred dollars that you can divert towards a better GPU. You’ll notice the performance difference there more than you would the few percent between DDR4-3600 and DDR5-6000.

Normally we’d give the board a workout with a bit of overclocking, but since you can’t with a B660 board, that’s moot. However, Intel finally allowed memory overclocking on B560, and of course it's also unlocked on B660. It’s possible to run well over DDR4-4000 but doing so requires you to set the board to Gear 2, which halves the memory controller speed and negates the latency advantage that DDR4 enjoys. Running memory in the DDR4-3200 to 3600 range or a little more while setting the board Gear 1 will deliver the best gaming performance.

All told, the MSI B660 Tomahawk DDR4 is definitely a board worth considering for your Alder Lake setup. It would be a smart value purchase for a typical gamer who runs a single GPU, XMP memory, an SSD or two, and is happy to let a 12th Gen processor do its turbo boost thing without manual overclocking.

Honestly, that’s probably 95% of the market, maybe higher. At $190 it’s not what we’d call a cheap motherboard, but in a market where a good mid-range Z690 board can cost a lot more, the B660 Tomahawk definitely offers a lot of features while not losing sight of the value thats typically offered by B660 boards.