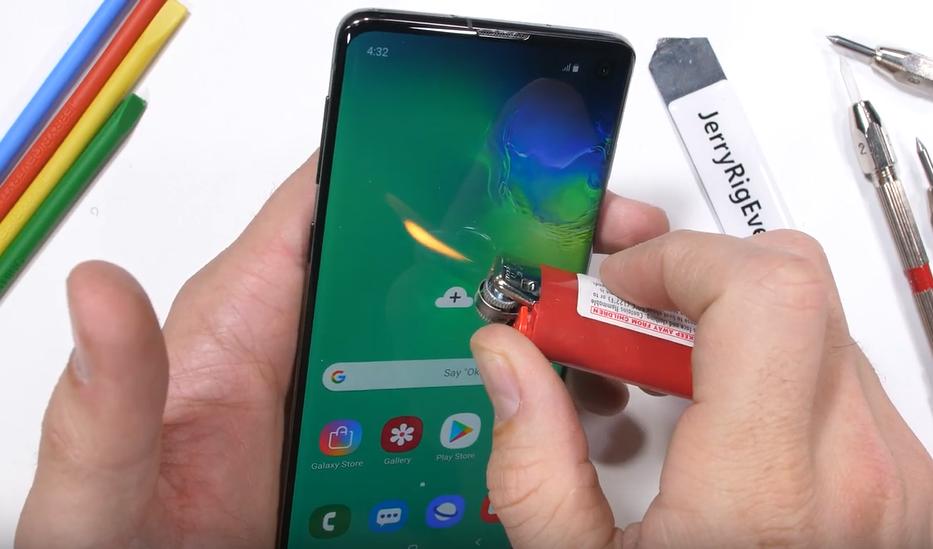 Are you a techie who knows how to write? Then join our Team! English native speakers welcome!

A new durability test video has been posted to the JerryRigEverything YouTube channel, this time for the Samsung Galaxy S10 smartphone. As usual, viewers are led through a series of somewhat excruciating and sometimes hard-to-watch tests as Zack Nelson rips out buttons, scratches the screen, and bends the device with all his might.

In general, the S10 held up very well during the durability test. The screen survived a 30-second lighter flame test, clearly aimed at smartphone users who like to dangle their device over naked flames. Entertaining as it was to watch, it does at least demonstrate how tough the S10’s display is (even though the oleophobic coating is destroyed).

The Samsung Galaxy S10 is also put through numerous scratch tests with different level picks (measured in terms of hardness). It’s difficult viewing for any smartphone owner, but it is handy to discover how much mistreatment a device can sustain, especially if you are contemplating a purchase. Nelson manages to create a series of deep scratches over the display and the aluminum frame, but the S10 continues to operate normally.

The far from gentle bend test is also successfully navigated, leaving Nelson to attack the ultrasonic fingerprint scanner. Scratches from a level 7 pick leave the sensor still working, so a level 8 pick is selected to create some disconcerting cracks in the glass. Perhaps unsurprisingly, the S10's ultrasonic fingerprint scanner ceases to function at this point, leaving the YouTuber to ponder on whether an optical in-screen scanner would have been the better option.