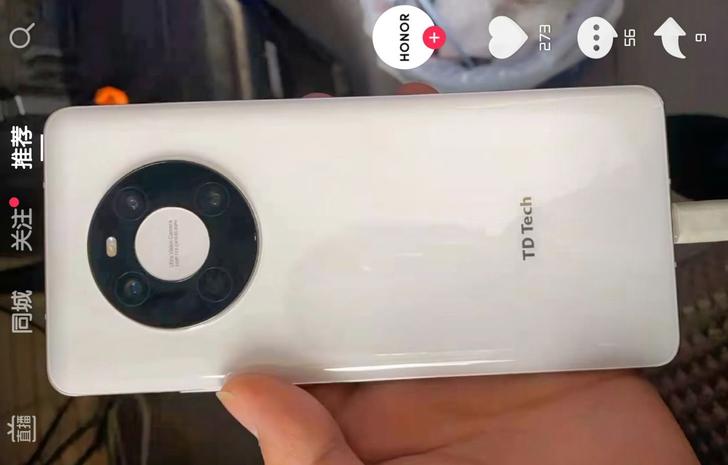 Huawei is turning to TD Tech again, having re-released the Nova 8 Pro this month. Now, Huawei has re-branded the Mate 40 Pro, a device that the company launched under its name in October 2020. TD Tech is yet to announce the Mate 40 Pro, but it has turned up on the TENAA.

Additionally, a hands-on photo of the device is circulating on Weibo. For context, Huawei and Nokia founded TD Tech in 2005. Principally, the joint venture has operated in China, with it focusing on network infrastructure. However, Huawei's ongoing sanctions with the US have prevented it from releasing smartphones with 5G modems. Seemingly, TD Tech serves as a loophole for Huawei to clear old stock, at least for now.

Correspondingly, the TD Tech Mate 40 Pro lacks any Huawei branding. TD Tech has also replaced Leica references with 'Ultra Vision Camera'; there is no evidence to suggest that the company has made any hardware changes. 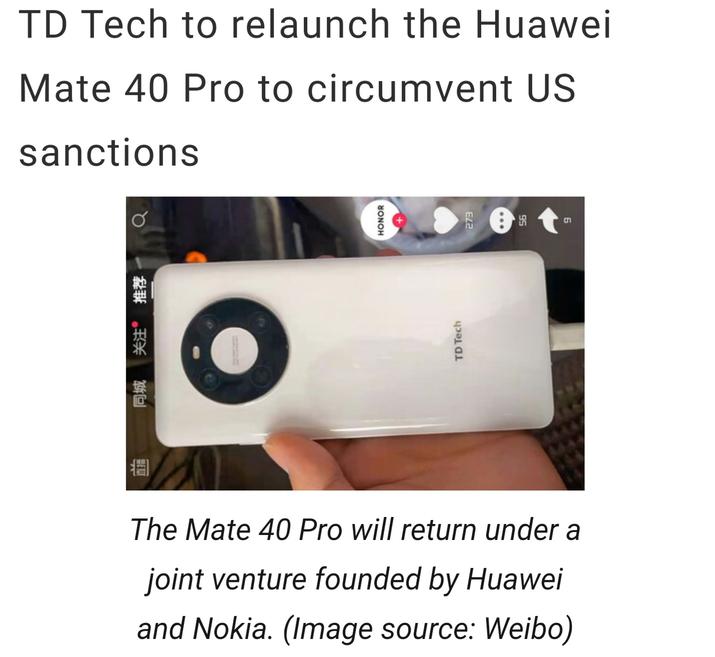 Hence, the re-released Mate 40 Pro should feature a Kirin 9000 SoC, a 6.76-inch and 90 Hz display, and a 4,400 mAh battery. Reportedly, the TD Tech Mate 40 Pro runs a re-named version of EMUI too, although it is unclear if the device supports Google Mobile Services (GMS).

SurveyJoin our Support Satisfaction Survey 2022: We want to hear about your experiences!Participate hereHuawei MateBook E: Surface Pro 8 competitor presented with a 2.5K OLED display and Intel Tiger Lake processors11/17/2021Huawei launches the Watch GT Runner as its latest wearable11/17/2021Huawei may license its smartphone designs to other companies to circumvent its US blacklisting11/16/2021Huawei patent describes how blood pressure monitoring could work in the Watch D11/13/2021Huawei MateBook E refresh to be unveiled on November 1711/12/2021The Huawei Watch GT 3 and Watch FIT mini are now purchasable across Europe and the UK with pre-order bonuses11/11/2021Huawei begins EMUI 12 open beta testing in Europe with the Mate 30 Pro, Mate 40 Pro and the P40 series11/11/2021Huawei will launch an e-ink tablet as well as the Mate X3 and Mate 50 in 202211/03/2021Huawei to release its first smartwatch that supports blood pressure monitoring this month11/02/2021EMUI 12 set to bring a taste of HarmonyOS to 28 devices including the Huawei Mate 10 and P20 series10/29/2021The Huawei MateBook 16 AMD offers a lot of power and has an excellent price-to-performance ratio10/28/2021Watch FIT Mini: Huawei releases a more compact and budget-friendly version of the Watch FIT10/23/2021Huawei Watch GT 3 arrives in six styles from £209.9910/22/2021Huawei MateBook X 2021 unveiled with minor upgrades and a huge price10/18/2021The Huawei Nova 9 series is coming to Europe for under US$60010/16/2021Huawei receives medical device certification for blood pressure and ECG sensors ahead of Watch D release10/13/2021Huawei's new MateBook 14s is the better MateBook X Pro10/10/2021

static version load dynamicLoading CommentsComment on this articleGatik and Walmart announce the firs...M2 MacBook Air release date and iPh... Alex Alderson - Senior Tech Writer- 5314 articles published on Notebookcheck since 2018Prior to writing and translating for Notebookcheck, I worked for various companies including Apple and Neowin. I have a BA in International History and Politics from the University of Leeds, which I have since converted to a Law Degree. Happy to chat on Twitter or Notebookchat.contact me via:@aldersonajPlease share our article, every link counts!
how is huawei laptop service in us