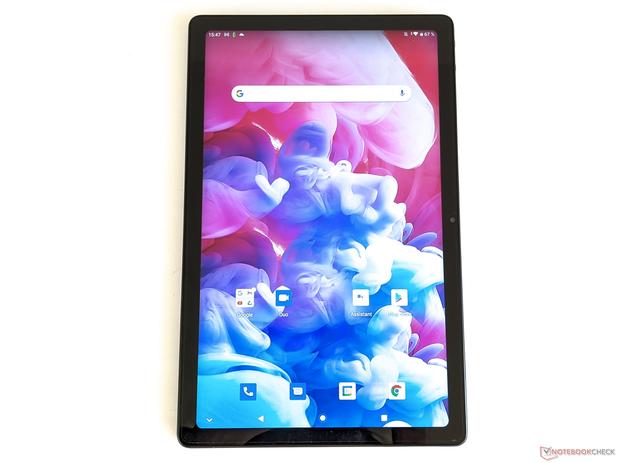 Teclast has already appeared frequently in our news and with hands-on tests of the Teclast M40 and Teclast P20HD we could already get an impression of the manufacturer's quality. With the Teclast T40 Plus, a tablet is now offered that could be an alternative to other inexpensive devices thanks to LTE and a price of approximately 200 Euros (~$232).

Teclast manufactures the casing of the T40 Plus from an aluminum alloy and plastic, which makes the device look comparatively high-quality. On the back, the different materials stand out from each other with different colors, but the transitions are even. Overall, the build quality is good.

However, the camera sensor on the back of our test model was not centered under the lens, which had negative consequences for the picture quality. However, we cannot judge whether this defect occurs more often.

In the pictures provided by the manufacturer, the bezel around the display looks a bit narrower than it actually is. The tablet is also thicker than it appears in the pictures. However, the actual dimensions correspond to those of other devices in this price range and with only 455 grams (~16 oz), the Android tablet is comparatively light.

The Teclast T40 Plus is equipped with a 3.5 mm jack and a USB-C port with USB 2.0 standard. This is OTG-capable, so it can charge connected devices and also provides connected mass storage as a drive.

Extras like a notification LED or an infrared port are not available. The Camera2 API is available with Limited. NFC, a radio receiver and DRM Widevine L1 were omitted.

A microSD card reader is installed in the T40 Plus, which only achieves a low speed of 26.36 MB/s when copying data with our reference memory card AV Pro V60. When a microSD card is inserted, it also blocks the second NanoSIM slot.

The Teclast T40 Plus runs a pure Android-11 system. Accordingly, no third-party apps or programs from the manufacturer are installed.

The security updates were up to April 5, 2021 at the time of the test. It is not possible to say how regularly they will be released.

Communication and GNSS - On the move with LTE and WiFi 5

Teclast's tablet can establish mobile connections via GSM, 3G and LTE. The installed SoC supports LTE up to Cat.7 in the downstream and Cat. 4 in the upstream, which enables speeds of up to 300 MBit/s (download) and 50 MBit/s (upload). VoLTE can also be used, which means that the tablet is also suitable for making calls.

Bluetooth 5.0 and WiFi 5 can be used for wireless connections in close range. With our reference router Netgear Nighthawk AX12, we achieved speeds of 305 MBit/s during transmission and 327 MBit/s during data reception. Thus, the Teclast T40 Plus is on par with our test field.

The T40 Plus can determine its location outdoors to a very good value of up to two meters (~6.6 feet) with the "GPS Test" app. 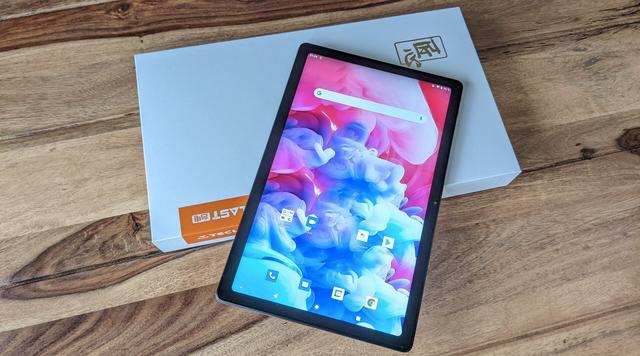 On our obligatory bike tour, the Teclast tablet only shows inaccuracies in curves and also a clear outlier when going around the lake. It is nevertheless suitable for navigation tasks.

Cameras - sensor not quite centered

Teclast equips the T40 Plus with an 8 MP main camera and a 5 MP front-facing camera. The latter takes portrait pictures that show weak contrast and look too dark and blurry even in very good light. The main camera shows our test subject with pale colors and a moderate level of detail. The black scattering on the right side of the picture is caused by the camera sensor, which is not located centrally behind the lens in our test model. Our panorama shot also shows that the camera does not cope well with uneven lighting conditions. When zooming in, subjects look muddy and practically nothing is visible in the low-light image. Apart from the option to switch on an HDR mode, no other adjustments can be made to the image quality.

Video recordings show a similar quality as our test photos. The main camera supports 480p, 720p and 1080p resolutions, and the front camera 480p and 720p. There is no information about the fps, nor are there any manual settings.

Choose a scene and navigate within the first image. One click changes the position on touchscreens. One click on the zoomed-in image opens the original in a new window. The first image shows the scaled photograph of the test device.

Under controlled lighting conditions, the Teclast T40 Plus records the ColorChecker passport too brightly. The test chart also clearly shows contrast weaknesses in the corners, whereby the right side in the picture is again affected by the crooked camera lens.

The T40 Plus comes with a USB power adapter with a matching USB-C cable, a SIM needle, and a protection cover that can also be folded over the display and serve as a stand.

Google's GBoard is available for text input on the T40 Plus. The touchscreen responds very well to touches and is also suitable for extensive swipe movements. Switching from portrait to landscape mode is also quick.

The screen of the Teclast T40 Plus consists of a 10.4-inch IPS panel and offers a resolution of 2000 x 1200 pixels. A brightness sensor is not present.

The maximum adjustable brightness is on a high level with an average of 486 cd/m². The illumination of 92 percent is also very good. We measured a maximum of 477 cd/m² in the APL50 test and the lowest possible brightness level is quite high at 39.9 cd/m².

The brightness control does not rely on the use of PWM.

ℹTo dim the screen, some notebooks will simply cycle the backlight on and off in rapid succession - a method called Pulse Width Modulation (PWM) . This cycling frequency should ideally be undetectable to the human eye. If said frequency is too low, users with sensitive eyes may experience strain or headaches or even notice the flickering altogether.

The settings menu of the T40 Plus allows you to adjust colors and contrast manually or have them regulated automatically. With the "Automatic contrast" setting and the "Warm" color profile, colors are displayed with an only slightly increased DeltaE-2000 deviation of 5.1.

ℹDisplay response times show how fast the screen is able to change from one color to the next. Slow response times can lead to afterimages and can cause moving objects to appear blurry (ghosting). Gamers of fast-paced 3D titles should pay special attention to fast response times.

The high display brightness makes the Teclast T40 Plus quite suitable for outdoor use. However, depending on the environment, annoying reflections and glare might occur.

The IPS panel of the T40 Plus is very viewing angle stable. Thus, content can be viewed even from flat angles without being distorted or displayed with distorted colors.

The Teclast T40 Plus is equipped with a UNISOC Tiger T618 and 8 GB of RAM take care of the system operation. The T618 is an older SoC from 2019 and can smoothly render the system as well as simple everyday applications. For graphical content, the internal GPU ARM Mali-G52 MP2 is responsible.

In the benchmarks, the system performance of the T40 Plus is on par with the Qualcomm Snapdragon 662 in the Samsung Galaxy Tab A7 LTE. In return, the graphics performance is slightly better in the Teclast tablet, but it cannot compete with, for example, the Lenovo Yoga Tab 11. Overall, the performance is appropriate for the price range.

The Teclast T40 Plus achieves a comparatively good result in the browser benchmarks and can take first place in our test field in WebXPRT 3 and Mozilla Kraken 1.1. In everyday use, websites are built quickly and scroll smoothly. Media content is also provided quickly.

Teclast installs a 128 GB eMMC flash storage in the T40 Plus. This only offers low read and write rates, which is primarily reflected in slower access to stored data.

According to our measurements, the surfaces of the T40 Plus heat up to 35.2 °C (~95 °F). Thus, the Android tablet only heats up moderately and can be held in the hand at any time, for example. The Wildlife endurance stress tests also show that the performance remains stable even under heavy load.

The speakers of the Teclast T40 Plus can play relatively loud and offer a sound spectrum that is pronounced on the higher tones. Thus, they are suitable for playing voice content, but external speakers or headphones are recommended for more complex media content. These can be connected via the 3.5 mm jack, for example, which works with an acceptable signal-to-noise ratio of 64.52 dBFS.

With a maximum power consumption of 5.94 watts under load, the Teclast T40 Plus is the most frugal tablet in our test field.

The included USB power adapter has an output power of 12.5 watts and is thus sufficiently high.

The Teclast T40 Pro achieves a runtime of 12 hours and 38 minutes in our practical Wi-Fi test. Thus, it can make good use of its 6,600 mAh battery and achieves a similar value as competing devices with generally larger battery capacities.

The tablet is fully recharged after about three and a half hours with the included charger.

Verdict - Suitable for everyday use

The Teclast T40 Plus proves to be an inexpensive tablet for simple daily applications in our test. The build quality is basically good, but there can be flaws in individual devices, as the slipped camera sensor on the back of our test model shows. The headphone jack and the 128 GB internal storage as well as LTE round off the otherwise sparse equipment package.

Thanks to a good display, long battery life and low price, the Teclast T40 is a tablet suitable for everyday use.

However, the very good battery runtime and the bright display are also good for daily use. Since the latter is PWM-free and reproduces colors relatively well, it is also well suited for sensitive eyes. If the internal storage is not enough, you can also expand it via microSD card.

Among the inexpensive tablets, Teclast places the T40 Plus in line with the Samsung Galaxy Tab A7 LTE and the Lenovo Yoga Tab 11. However, those who can spend a bit more money will quickly end up with the Apple iPad 10.2 as a strong alternative.

The Teclast T40 Plus is currently only available from Amazon (DE) but it can also be ordered via AliExpress, for example.

static version load dynamicLoading CommentsComment on this articleEditor of the original article: Mike Wobker - Senior Tech Writer- 444 articles published on Notebookcheck since 2017I carried out my first IT experiments with a 386-based system and a whole 4 MB RAM. This was followed by work on various PCs and laptops that I maintained and repaired for friends and acquaintances. After training to become a Telecommunications Systems Technician and gaining a few years of experience, I graduated with a Bachelor’s degree in Industrial Engineering. Currently, I pursue my fascination for IT, technology, and mobile devices by writing reviews and articles for Notebookcheck. I have also worked for Gamestar, Netzwelt, and Golem, among others.contact me via:@mornoc_mw, XingTranslator: Ninh Duy - Editorial Assistant- 226819 articles published on Notebookcheck since 2008My main responsibility as an editorial assistant is maintaining the Library section, which aggregates reviews from other publications and channels. In addition, my daily breakfast is Notebookcheck's long list of new content, which I comb through to select the most interesting topics for translation from English to French, Italian, Spanish, Portuguese, and Dutch."contact me via:FacebookPlease share our article, every link counts!
does huawei laptop have built-in lte