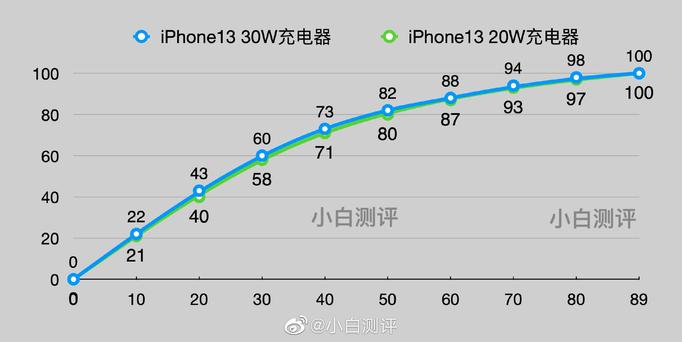 Apple went over a number of new, if arguably incremental, features of its latest iPhones in great detail during their recent unveiling. Then again, the Cupertino giant skated over the charging times and properties of the new flagship mobile devices, preferring to indicate that they were largely unchanged compared to those of the 12 series.

Accordingly, both lines are officially rated to use 20 watt (W) USB-PD 2.0 power bricks (which, in Apple's world, is the fastest standard available to a smartphone, and will once again have to be found around the home in 2021). Alternatively, there is MagSafe, left at 15W for another year, or standard Qi wireless charging, which, again, remains at 7.5W in all variants.

Then again, both the iPhone 12 and 13 series are also slated to charge from 0 to 50% in approximately half an hour - despite the fact each newer variant has a larger battery compared to its predecessor. So how is Apple pulling this off in its latest generation? According to a Weibo user, the answer is: improved charging after all.

This individual's findings, recently also re-posted to Twitter by @Duanrui, apparently involve conclusions that the iPhone 13 vanilla and Pro Max models can in fact charge at a maximum of 21W and 27W respectively. This requires the use of a 30W USB-PD 2.0 power brick, and can allegedly result in total charging times of 89 and 86 minutes respectively.

On the other hand, switching to a more normal 20W brick did not really change these 0 to 100% time for the 13. In addition, not even the Pro Max could sustain this reported maximal power draw across a whole charging session, only managing up to 26W for 27 minutes at a time, then dropping off to as little as 0.8W over a further 25 minutes (which is why an iPhone can seem to take forever to get to 100% exactly).

On the other hand, these results are derived from just 1 experiment from just 1 source thus far. Nevertheless, they might vindicate very vague indications from Apple itself that the 13 Pro variants can in fact achieve these speeds, as per their official spec sheet, which reads that they can charge at "up to 50% charge in around 30 minutes with 20W adapter or higher".

Finally, the test might also illustrate the worth of the conventional wisdom that electronics should be kept at a charge of between about 10% to 90% to keep their batteries healthy over. This might be the best way to ensure a new iPhone 13-series device lives up to the "amazing all-day battery life" claims made for some of these latest models.