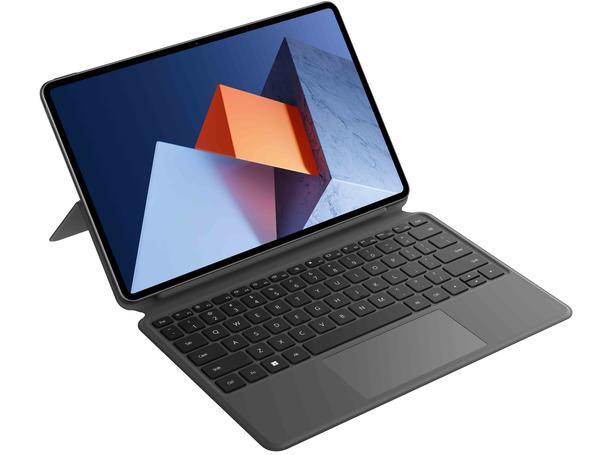 We have already reviewed the new Huawei MateBook E right in time for the launch in March. The designation MateBook immediately reminds us of the laptops from Huawei, but the manufacturer classifies the new device as a convertible. However, it is actually a conventional tablet and the design is also very similar to the familiar MatePad Pro models, but it is equipped with Windows 11, an Intel Tiger Lake processor, 16 GB RAM, and Thunderbolt 4.

The specs sound good at first, but there are some drawbacks when you want to use it as a productive tool. The tablet itself - unlike pretty much all other convertibles - does not offer an integrated kickstand. The corresponding keyboard cover, which also includes a stand, is therefore pretty much a must-have accessory. The keyboard is not illuminated though, which is a bit surprising considering the high price. There is also just one USB-C port; it does support Thunderbolt 4, but it will be often occupied by the power adapter due to the short battery runtime. The exception can be an external screen with support for power delivery via USB-C. The efficient Tiger Lake-UP4 processor also offers good short-term peak performance, but quickly slows down. Microsoft's Surface Pro 8 is better equipped in this respect.

The MateBook E shares its good aspects like the OLED screen, the great speakers and the good camera with the MatePad Pro, but there are also two major drawbacks. The MateBook E has an active cooling solution and the small fan will occasionally start spinning during lighter workloads, and the battery runtime between 4-6 hours is not that great, either. Regular tablets like the MatePad Pro or the Apple iPad Pro are better suited for media consumption on the sofa, and you can actually do some productive work on these devices as well thanks to the good software support.

Probably the biggest issue of the MateBook E is the price though. Our test unit with the Core i5, 16 GB RAM and 512 GB SSD (which is unnecessarily partitioned out of the box) retails for 1199 Euros, but it does at least include the keyboard cover. The entry-level model with the significantly slower dual-core i3-1110G4 with 8 GB RAM and a 128 GB SSD for 649 Euro is shipped without the keyboard. If you are seriously interested in the MateBook E, we recommend you get one of the launch deals where you get important accessories like the keyboard cover and the M-Pencil for free. Without these bundles, however, the price-performance ratio of the new MateBook E is not great. Please see our comprehensive review for more information on the MateBook E: