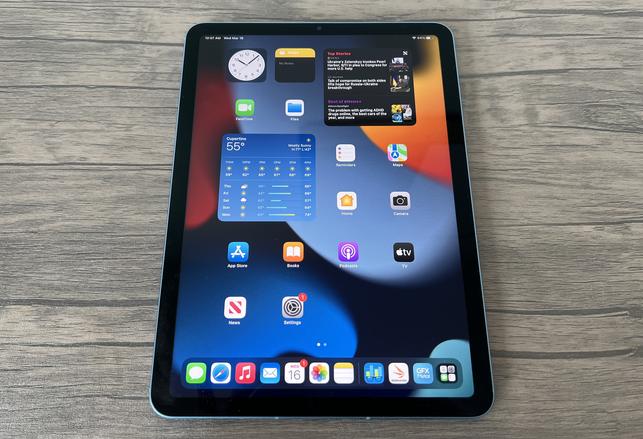 I'm surrounded by iPads. My family uses them all the time. Personally, I alternate between iPad and laptop. So it has been, so it shall be. I've wanted the iPad to be a Mac tablet for years. The iPad has crept incrementally closer with keyboard and trackpad support and with now the same M1 processor as the MacBook Air, but that still doesn't mean your iPad is now a Mac.

It does, however, mean that the latest iPad Air has a very, very nice processor and that it's lovely and speedy. It has the same design as the iPad Air revamp in 2020, and the redesigned iPad Mini last fall. But what are that speedy processor and the more iPad Pro/iPad Mini-like design (larger screen, less bezel, USB-C, Pencil 2 support) worth to you?

The middle iPad in Apple's lineup has come at a weird time. The entry-level iPad and iPad Mini were refreshed last fall, and the year-old iPad Pro, which has the same M1 processor as this but costs more, came out a whole year ago. This makes the Air the best high-end iPad for its price. And if you're looking to treat yourself to an excellent iPad that feels future-proof for a while, at least as far as its processor goes, this may seem like the choice.

But it's not that simple. The 10.2-inch iPad really does a lot of the same things, for a lot less money. Its screen's a bit smaller, the A13 processor is less powerful, perhaps, and yes, it has a Lightning port, not USB-C. But it works with keyboard cases, it uses that first-gen Pencil and it's all pretty much fine. That basic iPad still probably makes the most sense for casual users. As for portability, it's nearly the same size (with more screen bezel).

The Air's key advantages over the entry-level iPad: USB-C, a faster processor, a slightly larger screen, better stereo speakers, compatibility with the second-gen Pencil stylus that magnetically clips to the iPad's side (sold separately) and also with Apple's very nice and expensive Magic Keyboard case, which has its own trackpad (also sold separately).

I'd love to see those features make it to the entry-level iPad, but instead, Apple makes you pay up for them. So, that's your choice.

And keep in mind that there are extras. Add in some of these accessories, or a case (also sold separately), and bump up the storage (the included 64GB for $599 isn't enough, so you'll want the 256GB version for $750), and you're going to end up with a nearly thousand-dollar iPad after tax. (It starts at £569 in the UK and AU$929 in Australia.)

Also consider that last year's iPad Pro is technically even better, even if its advantages are relatively minor (better rear cameras, lidar for some 3D depth scanning/AR, smoother refresh rate display, extra speakers and a USB-C port that has faster Thunderbolt 4 data throughput). If that iPad Pro from 2021 is ever on sale for the same price as this Air, snap it up. Or, maybe, wait. 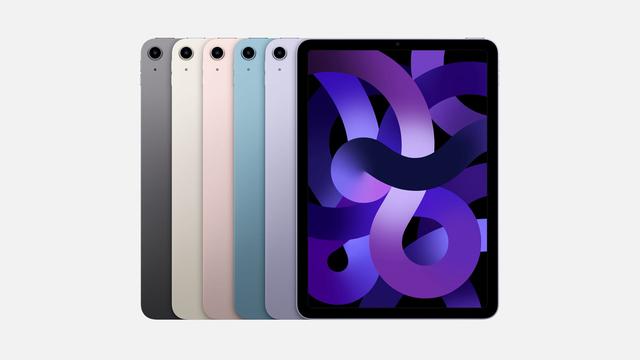 What's missing? Not much, except for the camera placement

Living with this iPad Air for part of the last week, I just don't miss anything that the iPad Pro has. I can try to miss those things, but those extras are way too niche for most people. At 10.9 inches, this is a perfect iPad screen size. Small enough to be portable, big enough for browsing and typing, a decent canvas for sketching and two-app multitasking works pretty well, if you play with the limited split-view options.

The display looks great, even if it's not Mini LED, and lacks that faster refresh 120Hz that the latest iPhone Pro and iPad Pro have.

The one thing I do miss, though? The front camera being off to the side. Apple insists on its iPads having cameras in the same portrait orientation layout as iPhones, instead of putting them on the longer edge so it would be centered in keyboard-attached "laptop" mode. Putting the camera along the longer edge would be the correct placement: the Studio Display monitor added Apple's Center Stage zooming camera, but there, it's in the right place. It kills me to do video calls on this iPad, with its excellent camera, and see my face off-center. No other iPad right now is any different, and all current models have that zooming Center Stage camera tech.

So, hey, it's not really a laptop, though

This is the thing: Just like last year's iPad Pro, which also got this same M1 chip, Apple hasn't flipped the switch on making iPadOS and MacOS merge. They're slowly sharing more in common, and iPads can work well with keyboards and mice and trackpads, but an iPad is just not the same thing as a Mac or PC. If you're really interested in an iPad that can feel a bit nicer and more laptoplike, and you want that second-gen Pencil that can snap to the side easily to charge, this is your upgrade. But for most people, the basic iPad, while unexciting, is still nearly as versatile and also less expensive.

That feeling extends to my thoughts on the M1 processor here. The performance is the same as last year's iPad Pro, and also the MacBook Air and Mini with the entry M1 processor. The new iPad Air is really fast and has great graphics punch, but the difference between the M1 and the A14 chip doesn't feel as dramatic as the leap the Macs got by going to the M1 in late 2020.

What about the iPad Pro?

Apple hasn't updated the iPad Pro since last spring, and it remains a mystery when it will happen. Will you want the extra power and possibly improved display that could offer? Will Apple push it even further into feeling like a Mac? Unknown, unknown. But if you're spending this much for an iPad Air and are craving the possibility of a fancier iPad (and have the money), wait.

I tried the optional 5G cellular on the Air, a new addition. The Mini and the iPad Pro and iPhone already have 5G. The cellular-equipped models cost $150 extra, data plan not included. It's true that 5G in most places isn't much faster than LTE, but having the option could make a difference for some. It's still weird that MacBooks don't have 5G antennas at all.

This iPad doesn't support mmWave, just sub-6 5G. Effectively, at many times, it feels similar to LTE: Speeds at my home were around 290 megabits per second on Verizon, while in Washington Square Park in New York speeds were only around 60Mbps to 80Mbps.

This keyboard, which came out two years ago, still feels great. But the angles are limiting for the stand, and it's a little more cramped on the 11-inch model. It's expensive, and you can't use it as a normal folio case, either: To read on the iPad, you'll probably want to pop it out of the magnetic case. But I love how the typing feels.

Bottom line: All the iPads are perfectly fine now. Pick your price

Assuming the iPad won't take a leap into Mac-land, right now all the iPads are capable and useful, and all have been updated enough in 2021 or 2022 to feel good enough.

I love how the iPad is a relatively lower-priced versatile computer in Apple's lineup, but it all depends on what you're looking to get out of it. I'd still recommend the basic iPad for a lot of people, but this iPad Air is a solid step up, and the one I'd probably want to buy the most.

But keep in mind: The 64GB $599 model doesn't have enough storage. You'll need the 256GB model, which is $750. Apple's entry-level iPad, meanwhile, costs $329 for 64GB of storage and $479 for 256GB. You're paying nearly double the price for the entry-level Air. Is the extra $270 worth it for you? Maybe. Is it worth it to pay another $200 to get the entry-level 11-inch iPad Pro, which has 128GB of storage (more acceptable) and better cameras, 120Hz display, even better speakers, lidar and Face ID? Probably not. I wouldn't pay up for the Pro at this point… not until Apple finalizes its plans for that model later this year.

Find the best phones, apps and accessories with our CNET Mobile newsletter. Delivered Tuesdays and Thursdays.iPad UpdateTabletsiPadOS AppleNotification on Notification off Mobile
why is my apple laptop screen grey