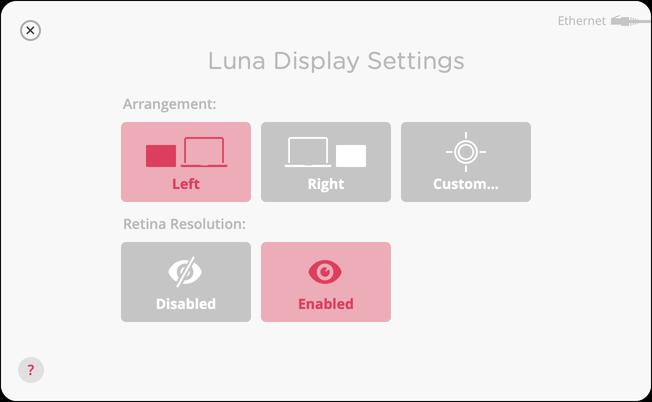 Luna Display Turns a 27-inch iMac into a 5K Display

The recent disappearance of the 27-inch iMac with 5K Retina display from Apple’s product line has thrown a spotlight on the core design tradeoff with an all-in-one Mac: you can’t separate the Mac from the monitor when it comes time to upgrade (see “Which Mac Will Replace the 27-iMac for You?,” 12 March 2022). But what if you could somehow connect the old Mac in such a way as to make it look like a display to a new Mac? That’s the concept behind Astropad’s $134.95 Luna Display. When we first covered the product in “AstroHQ’s Luna Display Dongle Turns a Mac into a Second Display” (20 November 2019), Julio Ojeda-Zapata concluded:

Though not yet fully baked, especially on the DisplayPort end, Luna hardware and its related software are a godsend for those with extra Macs ready to be repurposed as second displays.

Since Astropad’s initial release of the Mac-to-Mac mode, the company has radically improved Luna Display. Most notably, starting with version 5.1, Luna Display has seemingly achieved the holy grail of dongle-based display—support of the 27-inch iMac at full 5K Retina resolution. Alison Sheridan recently wrote about Luna Display in detail, finding that it works well for her setup, and after talking to her about it, I summoned the energy to move my 27-inch Thunderbolt Display to the floor and replace it with one of my extra 2014 27-inch iMacs.

To make a long story short, Luna Display does turn my older 27-inch iMac into a secondary 5K Retina display for my 2020 27-inch iMac—with that wonderfully crisp Retina text—but it comes with quite a few tradeoffs. I don’t know if I could live with them because Luna Display exacerbates a problem related to my particular 2020 27-inch iMac that causes multiple kernel panics per day. That was sufficiently troubling that I switched back to my Thunderbolt Display as soon as I finished writing this article. More about the kernel panics later.

Refer to Julio’s and Allison’s articles for details about the Luna Display setup. In essence, you:

Since I understood the concept, I went about installation fairly haphazardly, but it worked instantly out of the box. I moved all the windows I like on my secondary screen over to it and went to work. That’s when I started to run into all the tradeoffs of using what is essentially an impressive hardware hack as an everyday monitor.

As soon as I started using my secondary iMac as a display, I noticed issues with three interface interactions:

None of these problems were deal-breakers, and forcing Luna Display to use Thunderbolt to connect (in Luna Display > Preferences > Mac-to-Mac) reduced their severity. If you were using the 40 Gbps Thunderbolt 3—my 2014 27-inch iMac supports only the 20 Gbps Thunderbolt 2—the extra speed might eliminate all the interface hiccups. Regardless, I suspect I would get used to the slight performance issues over time if I were to use Luna Display for longer.

As with the performance problems, this is far from a deal-breaker. I could always settle for a Wi-Fi or Ethernet connection to the secondary Mac because both worked acceptably, if not quite at the level of Thunderbolt. That’s not surprising given the two Macs’ shared 802.11ac Wi-Fi 5 connections are probably a bit slower than their gigabit Ethernet connections, and neither compares to the 20 Gbps Thunderbolt 2 in the 2014 27-inch iMac.

Alternatively, if performance was paramount, I could potentially use a Thunderbolt hub to provide additional ports. That would add to the cost but offer other benefits as well.

I don’t watch much video, but when I do, it’s almost always a quick YouTube video playing in Brave, which lives on my secondary screen. As you might expect, the performance issues that manifest themselves in small ways when working with interface elements become far more noticeable with a video, and even more so when I expanded the video to full screen.

To be fair, the video is entirely watchable, just pixelated. And if you’re watching something with relatively little movement—YouTube likes to show me Saturday Night Live skits—it’s not a major problem. However, the track race videos that I intentionally watch are painfully blurry. 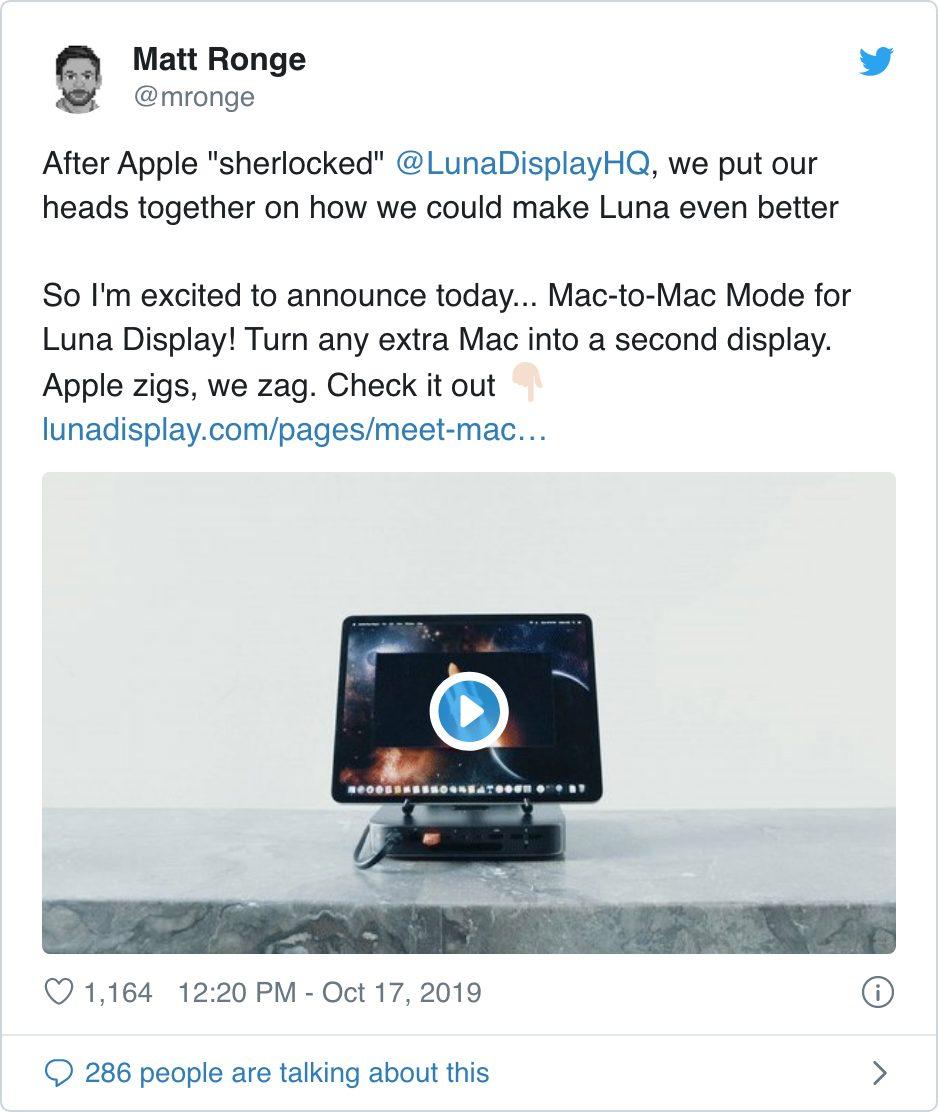 Of course, we’re talking about a secondary display here too. Nothing prevents you from playing videos on your primary display, where they won’t suffer from any screen-related quality issues.

I didn’t anticipate this annoyance. Apparently, when the screen-sharing technology underneath Luna Display is active, Apple won’t allow the Apple Watch to unlock the Mac. I’m not sure what the security concern here is, but perhaps a Luna Display could be used to hijack another Mac’s video output without the user’s knowledge. This feels far-fetched, but it’s better to be safe than sorry. There is no workaround—you simply lose Apple Watch unlocking, which is a shame.

Perhaps I’m unusual in this regard, but I always launch all my core apps at login, and when I’m using my Thunderbolt Display, they all appear in their appointed positions on either the primary or secondary screen. When I switched to Luna Display, I had to reposition those apps that are normally on the secondary screen on every restart.

Again, this problem has multiple workarounds. I could avoid launching anything other than Luna Display at login, and apps that I manually launched after it would be able to place their windows on the secondary screen. Alternatively, multiple utilities can reposition windows according to a pre-defined layout.

I didn’t get as far as exploring either of those workarounds because of the final problem: constant kernel panics. I’m not laying this at the feet of Luna Display because it’s clearly a problem with my hardware setup, but for my particular situation, it rendered Luna Display unusable.

About Those Kernel Panics

Thirteen months after I purchased the 2020 27-iMac, it began experiencing kernel panics, mostly during sleep. The kernel panics from September 2021 mostly started with this line:

Searching on that text turned up a variety of discussions pointing the finger at NVRAM and SMC, at attached monitors, and more. The problem seems quite common, judging from the 45-screen discussion on MacRumors that continues to this day, across multiple versions of macOS. I’ve tried lots of different things, and what has worked—for months at a time—was some combination of disconnecting all devices, resetting NVRAM and SMC, and slowly adding things back. I can’t say what part of the process helped, but even when it has helped, kernel panics eventually return, usually when I change something associated with my Thunderbolt Display. And I’ve tried two different displays, and I swapped cables and adapters with Tonya, whose 27-inch iMac has never experienced such issues.

Some other kernel panics during this time, and all those since I began testing Luna Display this month, start differently. In this one, the Core: 0 and IA32 lines repeat with various changes four to six times:

My most recent kernel panic came after switching back to the Thunderbolt Display, but it also happened back in September when I first played with the Luna Display. It started with:

I might be able to get Apple Support to help somehow, but given that I can’t reproduce the problem at will, and it often goes away for months at a time, I haven’t been able to generate the energy to open a ticket. Had the iMac still been under warranty when all this started, I would have been more enthused.

Perhaps surprisingly, these kernel panics aren’t much of an interruption, partly because they almost always happen during sleep. When I’m using the Thunderbolt Display, I wake up the Mac and log in, after which it launches all the apps that were open when the panic occurred. Within a minute or two, I can get back to work, right where I left off. All my apps either auto-save or are cloud-based, though I have to be careful to click the Restore button in Brave to get my numerous tabs back. I don’t think I’ve ever lost any work to the crashes.

So if there’s one kernel panic every month or two, it’s hard to justify putting that much effort into fixing it. I recorded five kernel panics in six days back in September, after which I had one in late January, one in early March, and then two or three per day while I was testing the Luna Display. It was easiest to go back to the Thunderbolt Display, and although that reduced the frequency of the panics, I’ve still had two since reverting.

But don’t let my problems prevent you from trying Luna Display, as long as you go into it aware of its tradeoffs.