Home Article MacBook Pro vs. Air: Which Apple laptop is for you? 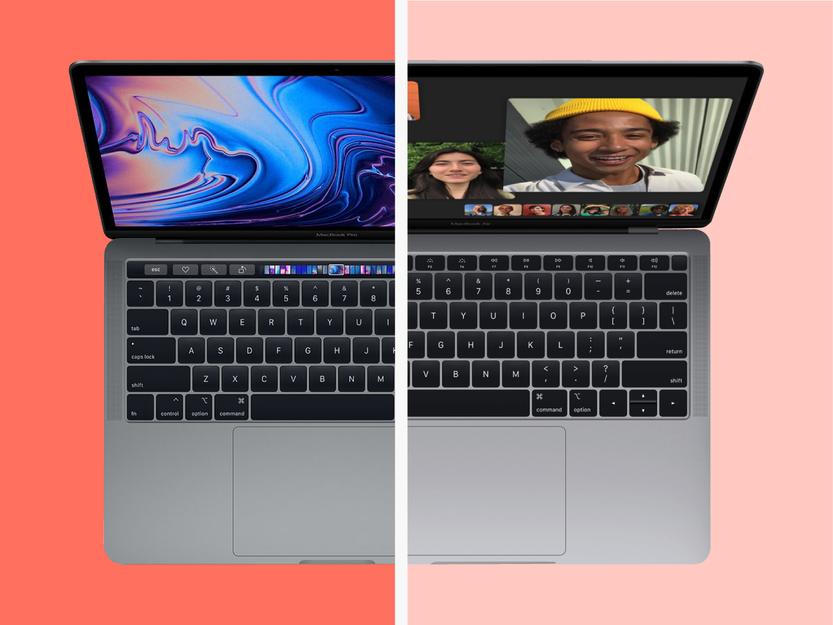 MacBook Pro vs. Air: Which Apple laptop is for you?

Deciding between the MacBook Air and the MacBook Pro used to be simple: get the Air if you need something basic; get the Pro if you need lots of power for video editing or 3D rendering. However, now that Apple’s powerful M1 chip has made the MacBook Air a legitimate beast — and with a total of three MacBook Pro models to choose from — finding the right Apple laptop for you isn’t quite as easy these days.

Fortunately, we’re here to help. We’re breaking down Apple’s entire current lineup of MacBooks and who they’re for, from the svelte but speedy Air to the absolute monster that is the new 16-inch MacBook Pro.

You should get the MacBook Air if…

You want the cheapest and slimmest MacBook

MacBooks aren’t exactly cheap, but the MacBook Air is the way to go if you’re looking to spend as little money as possible. Apple’s entry-level MacBook starts at $999, and we’ve seen it dip a few hundred bucks below that during big sales. As its name suggests, it’s still the most portable and sleekest MacBook of the bunch, with sharp edges that slim down to just 0.16 edges and a lightweight 2.8-pound frame. It’s also the only MacBook that comes in gold, if that’s your thing.

Despite its relatively low price and small frame, the latest MacBook Air still delivers some of the best performance you’ll find in a mainstream laptop. Thanks to the M1 chip inside, Apple’s most affordable notebook was still able to juggle tons of apps with ease and export high-quality video in seconds, and it ran circles around many comparable Windows laptops in our performance tests.

You want a quiet laptop

The MacBook Air is the only MacBook in the current lineup without a fan inside, meaning it doesn’t run the risk of sounding like a jet engine when it’s under a heavy workload. The Air stayed silent for us even as we exported heavy 4K files and had 20 different apps open — and it didn’t get excessively hot either.

You should get the MacBook Pro 13-inch if…

You want more power than the Air without paying a fortune

The latest 13-inch MacBook Pro has the same processor as the Air but with an additional graphics processing unit (GPU) core that gives it a bit more muscle for visually intensive tasks. It also has a fan built in, meaning it can let the processor work a little harder when the laptop is being pushed to the max during a heavy video export or big 3D render. 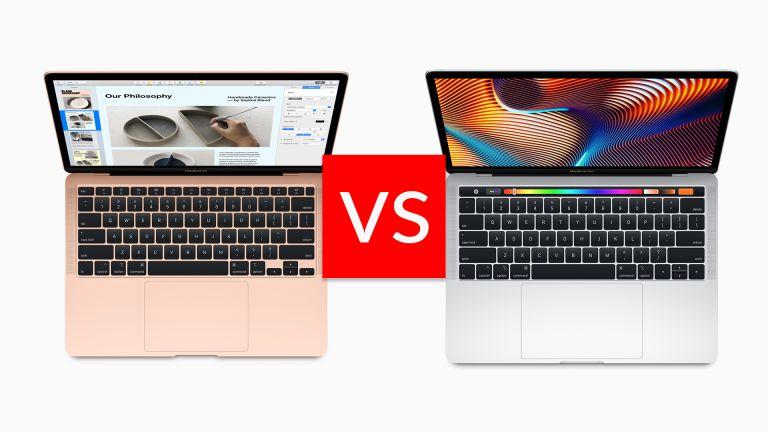 There’s definitely a difference between the two — in our testing, the Pro rendered 8K video files minutes faster than the Air, and we saw notably higher graphics scores on our benchmarks. We also got a couple extra hours of battery life out of the Pro, which clocked in at 16 hours and 30 minutes compared to about 14 hours on the Air. This makes the 13-inch model a nice middle ground in the current Mac lineup, as you’ll get more power and endurance than the Air for a pretty reasonable starting price of $1,299.

You care about the Touch Bar (for some reason)

If you insist on having a MacBook with Apple’s highly polarizing Touch Bar, the 13-inch MacBook Pro is the only current Mac to feature one. The Touch Bar ditches the usual row of physical function keys in favor of a touch-sensitive surface that can offer contextual controls based on what you’re doing. For example, it’ll let you easily swipe through a long timeline in Final Cut Pro, and can offer predictive text when you’re typing up an email or text message. We’re not huge fans of the Touch Bar, but it certainly has its uses for creative types. So if you want a bit more contextual control for certain apps, this is the Mac to get.

You want a MacBook Pro without a notch

The 14-inch and 16-inch MacBook Pros feature bigger and sharper screens with thinner bezels, but that all comes at the expense of a notch where the webcam sits. This won’t necessarily be a deal breaker for everybody, but if you want a MacBook Pro with a more even screen, the 13-inch is your best bet. And while it doesn’t have the more advanced Liquid Retina XDR display of its pricier siblings, the 13-inch MacBook Pro’s 2560 x 1600 screen was still a beauty to look at in our testing.

The M1-powered MacBook Air and Pro already offer some of the best performance we’ve ever seen from a laptop, but the new 14-inch and 16-inch MacBook Pros look like they could blow even those out of the water. That’s because they pack your choice of Apple’s new M1 Pro or M1 Max chip, which are designed for the most hardcore of power users and true creative professionals.

Apple says that M1 Pro can deliver up to 70% faster processing performance than M1, and up to twice the graphics performance. The M1 Max chip goes even further with twice the GPU cores, meaning it can pump out twice the graphics performance of M1 Pro and as much as four times that of the base M1. The 16-inch model in particular is also rated for the highest battery life of any Mac at up to 21 hours. We’ll have to test the new machines to see how that all nets out in real-world use, but these numbers suggest that the higher-end MacBook Pros are Apple’s best when it comes to demanding video rendering and 3D graphics.

You want lots of ports

If you want to be able to connect to lots of accessories and monitors out of the box, the 14-inch and 16-inch MacBook Pros are the way to go. These laptops each offer three USB-C Thunderbolt 4 ports for connecting to external 4K monitors and speedy storage drives, an HDMI port for even more external display options, an SDXC card slot for quickly transferring media files from your camera and a MagSafe charging port. You also get a headphone jack that supports high impedance headphones for music producers and audiophiles.

By comparison, the MacBook Air and 13-inch MacBook Pro offer only a measly two Thunderbolt 4 ports each, one of which will be taken up while your laptop is charging. So if you’d rather avoid using a USB-C dongle, the higher-end MacBook Pros are for you.

You want the best display on a Mac

The new MacBook Pros aren’t just more powerful than before; they also have the biggest, sharpest and most fluid displays of any Mac. We’ll have our final verdict on these screens once we’ve tested them, but on paper, they’re looking like the best option for folks who need lots of real estate and as much color and detail as possible.

The new MacBooks have displays that are 14.2 inches at a 3024 x 1964 resolution and 16.2 inches at 3456 x 2234, which puts them close to 4K and makes them notably bigger and sharper than the 13.3-inch, 2560 x 1600 panel you’ll find on the latest 13-inch Pro. The latest MacBook Pros use the same Liquid Retina XDR technology as the latest iPad Pros, which really wowed us with their strong brightness, contrast and detail.

They’re also the first MacBook screens to feature a refresh rate of up to 120Hz, which effectively means that doing things like scrolling through webpages and watching high-frame-rate video will look twice as smooth compared to other MacBooks. We’ve noticed a big difference when using 120Hz displays on laptops and tablets phones (including the iPad Pro and iPhone 13 Pro), so we’re eager to see how they hold up on the new MacBook Pros.

You want the best webcam on a Mac

The 14-inch and 16-inch MacBook Pros also bump the webcam resolution up to 1080p compared to 720p on the other two models, which should allow for even clearer video calls. We’ll have to test this ourselves, but if our time with the 1080p camera on the 24-inch iMac is any indication, the new Pros will likely offer a noticeable upgrade when it comes to capturing fine details and true-to-life skin tones. Unfortunately, there’s still no Face ID for hands-free logins, and no Center Stage support for having the camera automatically keep you in frame while you move — those are both still exclusive to iPad. Still, when you couple the better camera with the six-speaker setup on the higher-end Pros, you could be looking at the best MacBooks for video calls and content creation.