The official Weibo account for Samsung Exynos has now confirmed that ray tracing will be included in the next Exynos GPU, although it appears the post was actually uploaded earlier than scheduled and was subsequently shared by leaker Ice universe. While comments on the Weibo post have been unsurprisingly positive, followers of the noted tech tipster have been much more critical with their responses. Along with many being unimpressed by the screenshot comparison, there have been those voicing their concerns about the Exynos 2200 performance in upcoming devices such as the Galaxy S22 series. 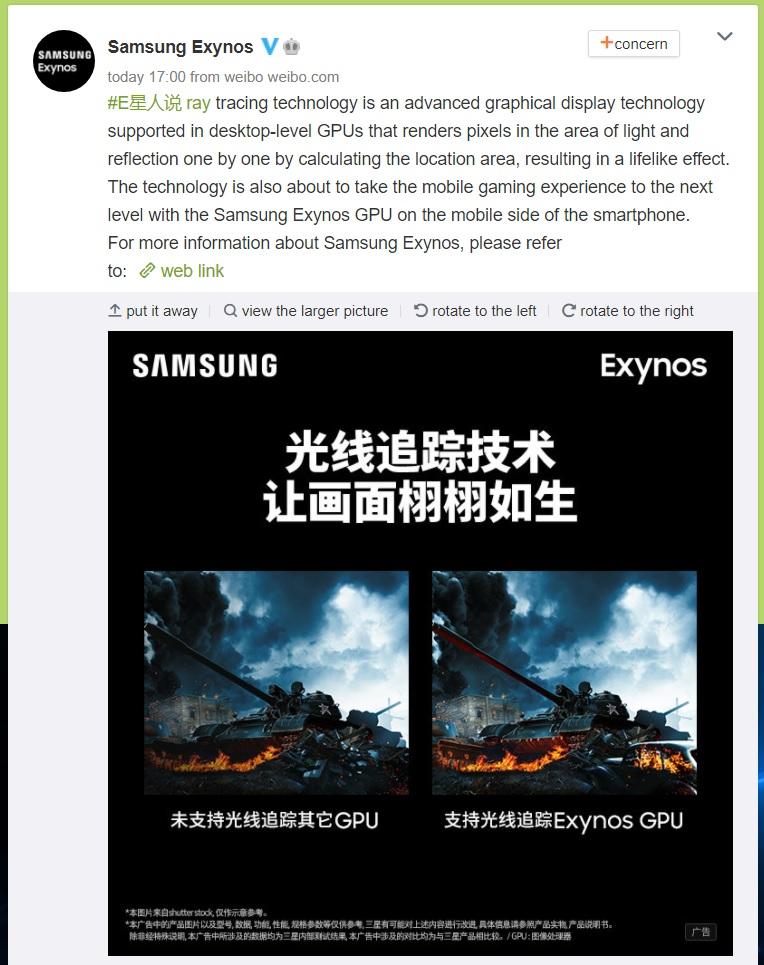 The official Samsung Exynos post features typical marketing blurb for this sort of reveal: There is a brief explanation of ray tracing followed by a declaration of “next level” gaming experiences incoming for mobile users. It has been widely expected for some time that the Exynos 2200 would have an iGPU part capable of ray tracing thanks to the presence of AMD’s RDNA 2 architecture, with variable rate shading also implemented. But now we have a good look at what the Exynos’ GPU ray-tracing capabilities are like in a screenshot comparison, and it hasn’t universally blown people away.

Of course, opinion is subjective, and it is clear to see the image on the right (see below) has more details such as flame reflections on the tank and for some reason the inclusion of a burning automobile. Some of Ice universe’s followers feel that the differences aren’t great enough and others have remarked that access to ray-tracing enhancements will be limited to the Exynos variant of the Galaxy S22 smartphones while owners of Snapdragon versions will be left out in the cold. There are also concerns about battery life (power consumption), achievable frame rates, heat production, and actual third-party game support.

However, if Samsung can cover all these bases with its Exynos 2200-powered Galaxy S22 smartphones then there will be many gamers delighted with the additional graphical improvements offered by ray tracing. The AMD GPU part of the SoC is expected to offer up to a 1,250 MHz clock rate (apparent specs for the Samsung Galaxy S22 Ultra; S22 and S22+ may vary) with the RDNA 2 graphics providing the power behind the increased pixel-rendering required for good-looking ray-traced output.

how to screenshot on samsung laptop