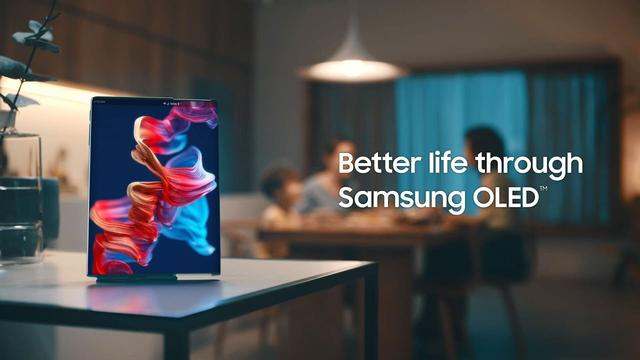 Last week, Samsung showcased new foldable devices at the Korea Display Exhibition (IMID 2021), including a sizeable foldable laptop. In a press release, Samsung Display referred to the laptop as the Flex Note, while confirming that it had a 17.3-inch display when unfolded with a 4:3 aspect ratio.

Now, @UniverseIce has revealed a new Samsung model name, the Galaxy Book Fold 17. The leaker has not elaborated on the image that we have included below, but the name appears to describe the Flex Note that Samsung exhibited last week. It seems strange for Samsung to have settled on the Galaxy Book Fold 17, having only unveiled 'Flex Note' a week ago, but @UniverseIce's reputation precedes them at this point.

For one, the Galaxy Book Fold 17 has an Under Panel Camera (UPC), a technology that Samsung debuted on the Galaxy Z Fold 3. The same teaser describes that the laptop supports 'OLED Sync' and 'Seamless motion speed', trademarks that seemingly describe low image blur and moving picture response times (MPRT). Additionally, the Galaxy Book Fold 17 covers 120% of the DCI P3 colour space, which would be impressive.

Additionally, @FrontTron estimates that Samsung will announce the Galaxy Book Fold 17 in Q1 2022. The timing of this could coincide with the launch of the Galaxy S22 series, which is expected to arrive in January. Alternatively, Mobile World Congress (MWC) could be another candidate for the Galaxy Book Fold 17's showcase. MWC 2022 will occur between February 28 and March 3, for reference.