When I think of a laptop that costs under $400, I think of something that no one should buy under any circumstances. I think of thick, heavy laptops with terrible battery life and often, underpowered processors. But now, the Samsung Galaxy Book Go is on my desk, and my first impressions are not what I expected them to be.

After using it for about a day, it’s important to remember that this is still an inexpensive laptop. There are things that blow me away, but there are other things where I have to remind myself that I shouldn’t be expecting too much.

There are some variants in the spec sheet, such as the ability to get it with a proper 8GB of RAM and 4G LTE. There’s also a 5G model with a Snapdragon 8cx Gen 2. None of these are available yet. The only one you can buy on Samsung’s website is the base model, which sadly, only has Wi-Fi connectivity.

Design, Display, and Keyboard: I can’t believe how thin and light this is

When I took the Samsung Galaxy Book Go out of the box, my first impression was that it’s game-changing. It’s wildly light at 3.04 pounds (for the price point), and it’s thin at 14.9mm. This isn’t supposed to exist. 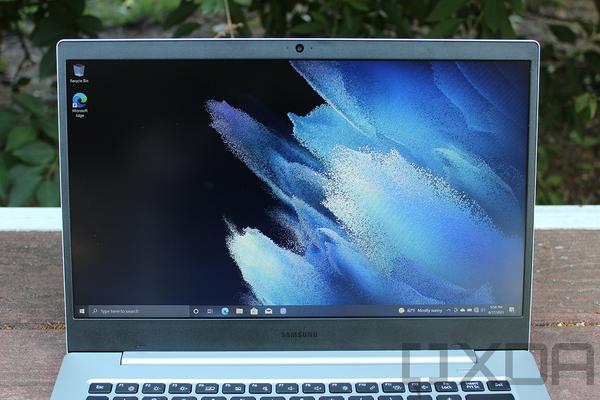 It also feels premium when you hold it. If I picked up this Samsung laptop and didn’t know what it was, I’d assume that it costs a thousand dollars like the Samsung Galaxy Book S.

Then I’d turn it on.

The display is 14 inches and has a 16:9 aspect ratio, which is fine. It’s FHD though, which is pretty good at $349. I feel like we do see a lot of WXGA screens at this price point, so we can count the resolution as a plus.

What’s not great is the viewing angle. You’ll see color distortions pretty easily if you look at it from pretty much any angle, and you shouldn’t be surprised about that. Taking the Samsung Galaxy Book Go out of the box made it feel premium, but we do have to remember that it’s still a $349 laptop.

The bottom line is that the display is probably better than you’d expect at this price, but it’s going to be the first thing that you see that doesn’t feel premium.

The keyboard is fine. It has longer key travel than the keyboard on the super-thin Galaxy Book S, so it does feel nice to type on. One thing you’ll notice is that if you press on the keyboard deck a little bit, it does bow pretty easily. It’s just something to take note of.

One other thing about the design that stood out to me is that it has a USB Type-A port. That’s the first time I’ve seen one on a Windows on ARM PC. The bad news, of course, is that it’s USB 2.0. It’s fine for plugging in the odd peripheral like a mouse or keyboard though.

Performance: The Samsung Galaxy Book Go has a Snapdragon 7c Gen 2, but don’t expect to be impressed

I’ve only been using the Samsung Galaxy Book Go for about a day, so I can’t comment on performance too much just yet. Unsurprisingly, this isn’t something that’s going to blow you away. The Snapdragon 7c Gen 2 is made for entry-level PCs just like this one, and that means you get entry-level performance.

As is the case with all Windows on ARM PCs, it does best when it’s running native apps. If you spend all of your time in the Edge browser, it’s fine. I typed this up in Edge and didn’t miss a beat. It’s when you have to run other apps like Slack that you start to run into an issue. Don’t get me wrong. This might get better over time, as single-core benchmarks seem to do better than the Snapdragon 850.

Honestly, the thing that seems to make it choke up the most is, you guessed it, 4GB of RAM. If you’re multitasking at all, that’s really not enough, and you’ll be able to feel it. I had apps like Slack and Skype open, along with about a half-dozen tabs in Edge, and it started getting to the point where tabs would have to reload if I tried to open them.

This really seems like the kind of PC that would be great for students. It’s perfect for carrying around all day, and it also seems like a good laptop to use if you’re doing most of your work through the browser.

Windows on ARM laptops are somewhat controversial at the high-end. It’s a tough value proposition over something that’s Intel-powered, thanks to app compatibility and performance issues. At the entry-level, however, Qualcomm can unlock things that Intel isn’t doing.

Thanks to the Snapdragon 7c Gen 2 chipset, a $349 laptop can be thinner and lighter than ever before, and it can get better battery life too (naturally, I haven’t tested battery life yet). It can even have 4G LTE, although this one sadly only has Wi-Fi; indeed, part of the Qualcomm value proposition was originally integrated cellular. But still, the cellular model is going to cost less than pretty much anything you can get with an Intel chip inside of it.

I’m really excited to review this laptop. It’s my first Snapdragon 7c review unit, so that’s fun, although I’m not placing any unrealistic expectations on it. And really, I’m excited that it’s doing things at an entry-level price point that weren’t happening before.

how to unlock keyboard on samsung laptop