I can’t tell you how excited I was to write this review. When Qualcomm announced its Snapdragon 7c chipset back in December 2019, it really piqued my interest. It promised the traditional value propositions like integrated cellular connectivity, thinner and fanless designs, and better battery life, but at a price point that most certainly wasn’t traditional. The sub-$500 laptop market isn’t a good one, and has few products I can recommend, but the Samsung Galaxy Book Go offers things that others don’t.

When Snapdragon 7c devices first started shipping, they were in educational devices, and later, on Chromebooks like the Acer Chromebook Spin 513. Now, the Snapdragon 7c Gen 2 is here in the Galaxy Book Go. Like the Snapdragon 8cx Gen 2, the new chipset is only a clock speed bump over its predecessor.

The Samsung Galaxy Book Go, unfortunately, sheds integrated cellular connectivity in the base model, but the rest is there. It’s a fanless PC that weighs in at three pounds. Indeed, that’s not something you see on a laptop that only costs $349. There are 4G LTE and 5G tiers as well.

This model was provided to me by Qualcomm, and it’s the base model. There are going to be more variants, such as the 5G model with a Snapdragon 8cx Gen 2.

I’ve reviewed hundreds of laptops in my career, and many of them are meant to be entry-level. All of those have a common theme though. They’re a lot thicker and heavier than premium devices. Indeed, they often offer the same Core i5 or even the Core i7 that you’d get in an ultrabook, with a solid 8GB of RAM, but you make compromises in other ways.

As far as the design goes with the Samsung Galaxy Book Go, it looks and feels like a premium device. What I mean by that is if I put this on a shelf with a half-dozen premium ultrabooks and convertibles, you probably wouldn’t be able to guess which one costs $349. And when I say it feels premium, I have to say I was surprised when I saw it was made out of plastic. Just by the feel, I thought it was metal.

The color it comes in is silver, so there’s nothing about it that really stands out. I still like the look a lot better than a gray laptop, like other Samsung laptops. The only marking on the lid is the shiny Samsung logo.

This is actually the first Windows on ARM device that I’ve seen with a USB Type-A port, which is cool. It’s USB 2.0 unfortunately, but you can still use it for connecting basic peripherals like a mouse.

You’ll also find two USB Type-C ports, one on each side. It’s always nice to be able to choose which side to plug a charger into. On the left side, there’s also a 3.5mm audio jack and a microSD card slot, so the ports really do check the right boxes.

While it’s impressive that a PC at this price has an FHD resolution, the screen is where you’ll start to remember how much the Galaxy Book Go costs. Frankly, it’s just not good. There’s noticeable color distortion if you try to look at it from any angle, and it screams budget PC. 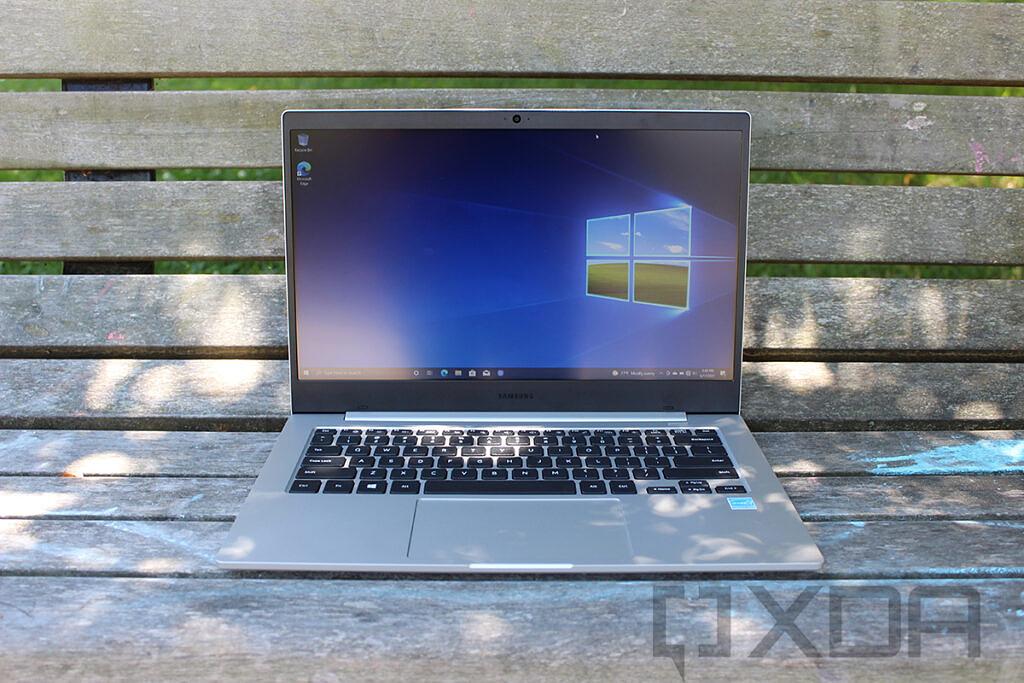 As you can see from my testing, the color gamut isn’t impressive at all.

There’s no touch, which is no surprise given this is a clamshell laptop instead of a convertible. The bezels are about what you’d expect, narrow on the sides and larger on top to make room for the webcam. Sadly, that webcam is 720p, although again that’s not surprising given the price.

One thing that’s surprisingly good is audio quality. The two 1.5W speakers are placed on the bottom of the device and they support Dolby Atmos. Listening to music on this machine is a much better experience than I’d expect.

One of the biggest pain points of this machine is the display, but the rest of it is pretty good. The Chiclet-style keyboard obviously isn’t winning any awards – it’s not an HP EliteBook or a Lenovo ThinkPad – but it’s solid. For the price, it’s pretty good and I have no complaints.

As you can see from the image above, there’s nothing that stands out here. It’s your standard black keys on top of a silver deck. Above the keyboard is the power button, which sits flush with the deck; however, it’s not a fingerprint sensor. Indeed, any Windows Hello biometric authentication isn’t happening here. That’s a sacrifice made to get to the price, and a reasonable one.

The touchpad is nice and big, at least big enough given the amount of real estate. The whole input experience is pretty good, or at least there isn’t anything bad about it. I’ve had laptops that cost two or three times as much with keyboards that are awful. I’d call this a win.

Like the Snapdragon 8cx before it, the Snapdragon 7c Gen 2 is a 150MHz improvement in clock speed over its predecessor. It’s designed for the entry-level, including Chromebooks and the educational market. Samsung is the first to put a Snapdragon 7c in a Windows-based consumer laptop.

It does feel sluggish in every day use, and for the most part, I use native apps. The bulk of my work is done in Microsoft’s Edge browser, which is native to ARM64. Other apps include Skype, OneNote, and Slack, the latter of which runs in emulation.

To be clear, Windows on ARM can run native ARM64 apps and emulated 32-bit x86 apps. There is x64 support coming with Windows 11, and in fact, I did install the Windows 11 preview about halfway through my testing process, just to see how much the experience improves. Indeed, Windows 11 does include various improvements for ARM PCs.

It doesn’t get much better with Windows 11, because there’s only so much you can ask for here. If you want to look across the board at the Intel Pentium Silver or Celeron processors that you’d expect at this price point, performance doesn’t really get any better. In fact, it’s probably worse.

What’s really the bottleneck here is that the Samsung Galaxy Book Go only has 4GB RAM. Windows PCs in 2021 need more than that. If you’ve got a lot of tabs open in the browser, you’re going to find that it has to reload pages from time to time.

On the other hand, Adobe Photoshop was surprisingly smooth. Of course, that’s another app that runs natively these days, along with Lightroom. Unfortunately, Adobe doesn’t offer 32-bit apps for emulation anymore, nor can you get the x64 apps through the Creative Cloud apps. In other words, your only options for Adobe apps are Photoshop and Lightroom.

Honestly, I think 8GB of RAM would completely change the experience for the Galaxy Book Go. There are supposed to be configurations for that, but right now this is the only one on Samsung’s website. In short, the chipset is pretty good for this price point, but 4GB RAM simply isn’t enough.

It’s worth remembering this is a really low price point. I say that because even people that buy inexpensive laptops might not realize how little you get for $350. This is normally a tier I wouldn’t recommend to anyone.

For benchmarks, I only used Geekbench, since that’s all that’s natively supported on ARM. Unfortunately, it doesn’t paint a full picture. Geekbench tests are for the CPU, but Qualcomm’s SoCs are a lot more than that, including the Adreno graphics and the DSP, which combine for the AI Engine.

Battery life is fine, but it doesn’t live up to what I expect from Windows on ARM. After all, that’s supposed to be one of the key value props. I only got about six hours of real-world usage. Sometimes it was a bit better, but with a full-sized laptop, I expected more. For example, the Lenovo Flex 5G got over 12 hours for me.

Conclusion: Should you buy the Samsung Galaxy Book Go?

Now for the big question. Should you buy it? The answer is, it depends. It all depends on how much you’re willing to spend on a laptop. When people ask me for laptop recommendations, my first question is what their budget is. Sometimes they say something crazy like $200. Others are more reasonable, and like I said earlier, I normally don’t recommend anything that costs under $500. But if $349 is what you’re looking to spend, the Samsung Galaxy Book Go would be my pick.

There’s just a lot of value here, and it feels so premium. When I first took it out of the box, I actually said “wow” out loud, because I totally didn’t expect what I got. The build feels great, and that’s made possible by the Snapdragon chip.

It’s not perfect, of course. The display isn’t great, but again, this price point doesn’t get you a great display. The bigger issue is it only has 4GB RAM. To put it simply, you’ll need more, but of course, that means paying more.

All around, the Samsung Galaxy Book Go is a phenomenal value. It’s got a design that’s unheard of for the price, and the overall experience is pretty good.

how to reset samsung laptop windows 8