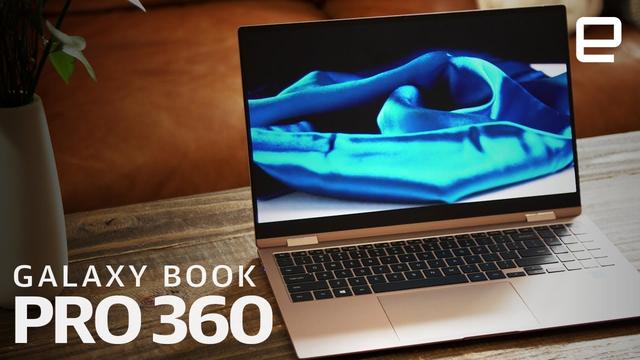 Samsung’s laptop game is gettin’ good. After showing us it can deliver on the basics while flexing its display and design muscle with the Galaxy Book Flex, the company is continuing its strategy of focusing on its strengths. The Galaxy Book Pro series features the AMOLED panels that Samsung is known for on its phones, plus a super thin and light design with a long-lasting battery. The Galaxy Book Pro is available in clamshell and convertible variants and comes in 13- and 15-inch sizes. I’ve been spending some time with the 15-inch Book Pro 360 (the convertible) and while most of what Samsung offers is good, in some ways the company has backslid with its latest laptop.

I was impressed by how light the 15-inch Galaxy Book Pro was when I first picked it up at Samsung’s hands-on event. My review unit is slightly heavier, since it’s the convertible version not a clamshell, but at 1.39kg (3.06 pounds) and 11.9mm (0.46 inches), it's thinner and lighter than the 15-inch Surface Laptop 4, the Dell XPS 15 and HP’s Spectre x360 15T.

Numbers and dimensions aside, the Galaxy Book Pro 360 actually looks sort of plain. It’s kind of Macbookish, with a rounded rectangular shape and a slightly tapering base. HP is the only laptop maker that’s producing really eye-catching devices these days, so I can’t fault Samsung too much for something that Microsoft and Dell also fail at.

My unit is what Samsung calls Mystic Bronze, and it’s similar to the copperish hue on the company’s flagship Galaxy phones. You can also get the Book Pro 360 in blue, while the clamshell models are available in blue, silver or gold. For most people, a traditional laptop will be enough, but those who want to work on a touchscreen without a keyboard in the way will appreciate the Book Pro’s 360-degree hinge. It’s sturdy enough to prop the Book Pro up in tent mode and hold the screen’s position without wobbling too much in laptop mode. 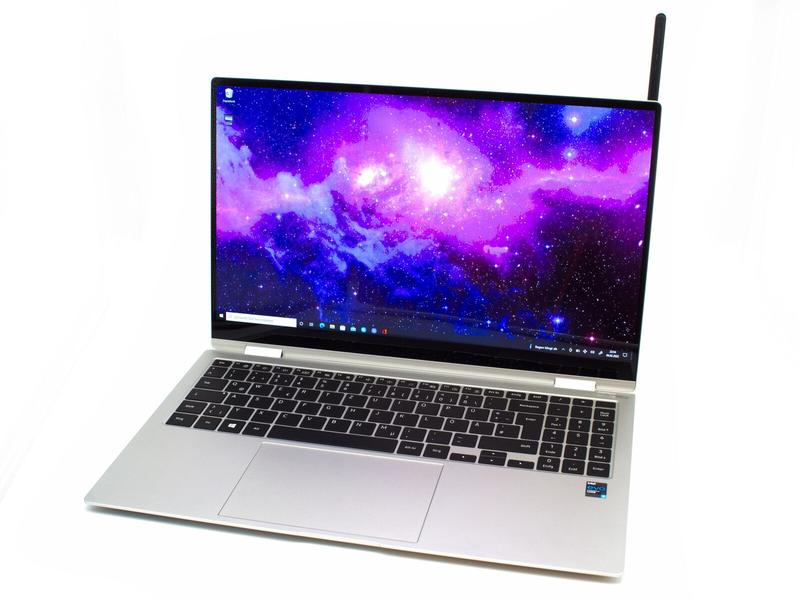 Despite its thin profile, the Book Pro 360 offers a decent array of ports. There are three USB-C sockets, one of which supports Thunderbolt 4, a headphone jack and a microSD card reader. A full-size USB A connection would have been nice, but I can live without it.

Older Samsung laptops’ power buttons sat alongside the ports on the edges, but the company thankfully moved the Book Pro’s to the top right of the keyboard. Hallelujah! I’ll no longer accidentally put the machine to sleep when I connect a dongle. The power button also houses a fingerprint sensor for Windows Hello logins.

One of the highlights of the new Book Pro series is that they use Samsung's AMOLED panels, which promise better contrast ratios and more precise colors. The larger Book Pro 360 uses a 15.6-inch Super AMOLED touch panel with a Full HD resolution, and it definitely had deeper blacks, better contrast and more accurate colors than the Book Flex’s QLED screen, but I only noticed the difference when I placed them side by side.

Samsung also offers a selection of color profiles for the display like Vivid, Natural, Photo Editing and Movie. These will switch the screen to the AMOLED native, sRGB, Adobe RGB and DCI-P3 color spectrums respectively. You can also set this to Auto mode, which will let the Book Pro decide what profile to switch to based on what you’re doing. This is pretty much the same as what’s available on the Galaxy Book Flex, and on both machines I never noticed the auto switching making much of a difference. You’re probably better off manually switching the color profile to what you need in the moment yourself.

I don't generally use 15-inch laptops, so the extra screen space felt generous. I liked being able to snap two windows side by side and still easily read the fine print on an FAQ page while furiously Slacking my coworkers. At 16:9, the Book Pro's aspect ratio is a little short for a modern laptop. Most companies like Dell, Microsoft and HP have transitioned to either 3:2 or 16:10, and Samsung should follow suit. I'd love a taller screen so I can check more messages in my inbox to mark as read without having to scroll, but it's not a deal breaker.

Things that also feel extra roomy on a 15-inch machine are the keyboard and trackpad. I had to adapt to the new layout, since my fingers are used to a slightly more cramped setup on my 13-inch ultraportable. But once I got familiar with where everything was, typing on the Book Pro was a breeze.

There's not much more travel here than on the Galaxy Book Flex that's my daily driver, nor are the keys as cushy and deep as the Surface Laptop’s. But for a machine this thin, the Book Pro offers a decent typing experience. The numpad on the right is handy for those who enter numbers a lot, and when Num Lock is off it doubles as an extra arrow D-pad with actual Home, End, Page Down and Page Up keys. No need to hit Fn!

Below the keyboard sits the Book Pro's absolute mammoth of a trackpad. Samsung went all out here — it’s basically the size of my hand. You'll never run out of scrolling room or space to pinch and zoom, and my fingers almost got tired traversing the expanse.

On basics like display, keyboard and trackpad, Samsung has done a respectable job. But it's on the bells and whistles that the company needs to differentiate itself from established laptop makers like Dell, HP, ASUS and Lenovo. One of the things Samsung has done is include an S Pen with the Book Pro 360 which is handy for digitally signing the piles of non-disclosure agreements I get every week. I wish there was a slot to house the stylus like the Book Flex offers, but at least it attaches to the Book Pro 360 magnetically.

Like many of its competitors, Samsung also offers some software to help protect your privacy and boost your system's performance by adapting to your needs. The latter is hard to gauge, since it works in the background to optimize CPU and thermals based on what I'm doing. It also doesn’t seem wildly different from what Windows already offers in its power management settings.

Samsung's suite of privacy tools include a password-protected folder for sensitive content, a "Secret Screen" to prevent onlookers from snooping on your work and a Block Recording shortcut that kills your microphone and webcam. I didn’t use the first two very much, since I don’t share my laptop with people and haven’t been working on confidential stuff outside. Plus, Samsung’s implementation of the privacy screen is kind of wonky — it lets you make the window you’re working on either translucent or dim so that it’s harder to see from over your shoulder. But it’s also hard for you to read a semi-transparent document, especially if you have multiple apps or a complicated wallpaper under it, and if you wanted to dim your screen you could just use the brightness settings.

I did leave Block Recording on almost all day, though, and can quickly turn it off when I need to take calls. There’s also a setting that will use the webcam to take a photo of anyone that entered an incorrect password and send it to you. That’s nice, though not a first. The system will also oddly send you pictures of nobody along with emails saying “The laptop cover is closed.” It’s a minor quirk — what’s worse is the amount of time it takes after a failed login attempt before the message hits your inbox. Sometimes you don't even get an email despite an alert on the Book Pro saying one was sent. This could be a helpful tool, but Samsung needs to seriously refine it. I did get a kick out of the pictures of myself attempting to crack my own password, but the image quality was honestly pretty trash.

That’s my biggest complaint about the Book Pro: its 720p webcam is downright awful. I don’t know if it’s the hardware but I suspect it has something to do with the weird beauty filters Samsung built in. It’s like early Galaxy flagships all over again — selfie cameras that come with aggressive face editing options. This software appears whenever you use the webcam, whether it’s on a Google Meet call or the Windows Camera app.

A row of options appears at the bottom of the screen whenever the camera is launched, and you can choose from profiles like Natural, Clean and Beautiful. The “Beautiful” filter enlarges eyes, for example, and I hope I don’t need to tell you just how problematic this is. Like it did on smartphones before, this tool also lets you adjust your eye size, remove blemishes, add makeup and check boxes for things like “slim chin,” “nice smile” and “cute nose.” Looks like Samsung hasn’t learned its lesson.

You can also choose “Off” to not apply any of the filters, but you’re still left with a weirdly distorted image. It’s hideously low-res and dark, which is particularly odd since the photos of me attempting to log in were overexposed.

If you can get past the bad webcam, the Galaxy Book Pro 360 is a very capable machine. With its 11th-gen Intel Core i7 processor and 16GB of RAM, the laptop never hiccuped during my testing. I wrote most of this review on it while tackling back to back video calls and pushed it further with a couple rounds of League of Legends and it kept pace throughout. It blazed past the similarly equipped Thinkpad X1 Nano and the AMD-powered Surface Laptop 4 on most benchmarks.

Depending on how you use the Book Pro 360, Samsung said it can last up to 16 hours or 20 hours of pure video playback. It fell short of that estimate on our video looping battery test, conking out after 15 hours and 20 minutes. But that’s still a respectable runtime, and is about the same as the 15-inch Surface Laptop 4. It also outlasted the Dell XPS 15 and mainstream ultraportables like the Lenovo ThinkPad X1 Nano.

With its new 65-watt fast charger, Samsung promises the Book Pro 360 can get to eight hours of juice in 30 minutes. That is pretty clearly not the case, though. After completely draining the battery, I plugged it in for 45 minutes. When I took it off the charger it said the battery was at 38 percent. But an hour and a half later, I got a low battery warning. While the recharge speed was indeed fast, I doubt you can actually squeeze a full work day’s worth of power after just 30 minutes of charging.

With a sumptuous display, impressively thin and light design and respectable battery life, the Galaxy Book Pro 360 once again shows Samsung is capable of producing a great laptop. The company’s also done well by including the S Pen as well as providing a roomy keyboard and trackpad. I don’t even mind the privacy-centric software features. But with a bad camera and atrocious face-editing software, Samsung needs to remember that not everyone wants aggressive filters on their photos and videos . The Book Pro 360 is a great 15-inch laptop if you don’t need a good webcam, and in a world where we’ve grown incredibly reliant on video meetings, it’s hard to imagine there are many people who can live with that.