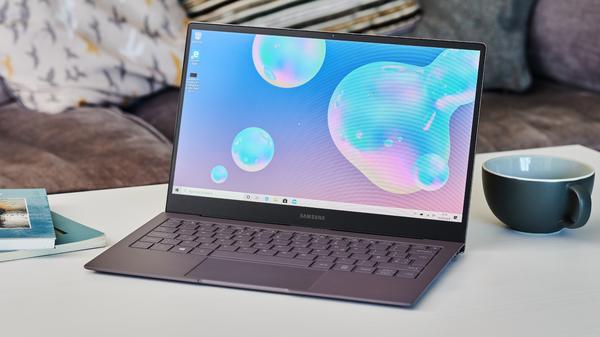 Despite decent performance and good battery life, the Samsung Galaxy Book feels more like a budget laptop with a high price tag.

About the Samsung Galaxy Book

Here are the specs of the laptop we tested:

Looking at the main specs, the Galaxy Book has everything you'd expect a productivity laptop to have: performance, decent storage capacity, and a good number of ports. But it's the other things—the little things—Samsung left out that have us scratching our heads.

A good laptop should last at least a full workday on a single charge. You shouldn't need to fiddle with additional settings just to get a decent amount of juice, either, and thankfully the Galaxy Book delivers on that front.

To test the battery, we ran a Chrome extension that cycles through a variety of websites until the battery dies. While the Galaxy Book Pro didn't take the top spot (that still goes to the 16-inchMacBook Pro M1 Max), it still beats most laptops we’ve tested at just over ten hours.

Even in day-to-day use, which included browsing the web, working in Google Docs, taking several video calls, and Slacking throughout the day, the Galaxy Book managed to last longer than a typical workday with a bit of juice to spare.

Many laptops will sacrifice ports in favor of thinness and overall portability. While the Galaxy Book is pretty light, it still manages to pack enough ports that you can confidently leave your dongle behind on your next weekend getaway.

On the left side of the laptop, there are two USB-C ports for charging and data transfer, an HDMI port to hook up to an external monitor, and a USB-A port for any older devices you need to connect to. The right side houses an additional USB-A port, a headphone jack, as well as a microSD card slot.

If you’re looking for a reliable laptop with enough power to get through a day’s work, the Galaxy Book is certainly up to the task. In our testing, it performed nearly as well as the Dell XPS 15.

In daily use, the Intel Core i7-1165G7 processor and 16GB of RAM gave the Galaxy Book enough power to perform tasks like sending emails, writing drafts, watching videos, and listening to music through the course of a workday, along with the occasional video call. Throughout it all, the Galaxy Book never got overwhelmed or struggled to keep up.

Despite all that power, the Galaxy Book still runs an integrated Intel Iris GPU, which will limit its graphic capabilities for things like gaming or 3D image processing and video production. If you’re not looking to do anything too serious, though, this laptop packs enough punch for your daily tasks and leisurely browsing.

The Galaxy Book's biggest weakness is its display. While its matte finish does a good job of deflecting light and glare, and its 1080p resolution is fine for everyday work and web browsing, its viewing angles are atrocious.

If you stare at it straight-on it looks fine, if a bit washed out thanks to the matte display panel. But if you tilt the screen the tiniest bit everything becomes either much brighter or much darker, depending on your backlight settings. In either case, the screen becomes impossible to read.

This wouldn't be a dealbreaker if it only popped up in unique circumstances, but it happens no matter what you have showing on the screen. Take a spreadsheet, for example. If you tilt the screen forward just a bit all the cell shading goes away, which makes it impossible to differentiate cells from each other. If you tilt the screen too far back, everything gets so dark you can barely see it. These features might be good for screen privacy, but they're not great for overall viewing angles.

While a touchscreen isn't entirely out of place on a laptop, it needs a little finessing to be useful. That polish is totally lacking on the Galaxy Book, where the touchscreen feels more like an afterthought than a cleverly-integrated part of the computer.

As mentioned above, the display tends to get washed out when viewed from an angle. If you're prone to tapping your laptop's screen to hit buttons, or to scroll down the page like you're using a tablet, that might cause the screen to shift a little bit. On other touchscreen laptops, like the HP Envy x360, this wouldn't be an issue, since the hinge is designed to let you convert the laptop into a tablet. On the Galaxy Book, though, that slight shift in viewing angle is the difference between being able to read what's on-screen and everything being washed out.

The touch screen is responsive enough to use, but it distorts around the point where you apply pressure. This gives the screen an unpleasant look if you’re swiping or scrolling with your finger. This might be fine on a cheaper laptop, but for a laptop that costs $1,000, the display should be able to withstand a bit more pressure.

Not every laptop keyboard is excellent, but most are at least passable. The Galaxy Book misses that mark in two ways: the Numpad to the right of the keyboard offsets it from the center of the laptop, which can be funky if you're not used to it, and more importantly, it isn't backlit.

The first one is easy to forgive if you're used to working in number-heavy environments like spreadsheets or accounting software, but for those looking to get some writing done, it's more of a hindrance than an aid. Adjusting to the keyboard, which is offset to the left to make room for the number pad, takes a bit of time.

Other than that, the keys are mostly fine: they're big enough to consistently hit the correct key while typing, and spaced out enough to not feel cramped, though they're a bit shallow.

The biggest issue with the Galaxy Book's keyboard is that it isn't backlit, which may be forgivable on a cheaper laptop, but the model we tested retails for over $1,000. For that price, you should be confident you can type even in a poorly-lit environment.

Should you buy it?

This Samsung Galaxy Book retails for about $1,000. Most laptops in that price range offer more than the bare minimum in a capable laptop. Meanwhile, despite decent performance and good battery life, the Galaxy Book feels more like a budget laptop despite its high price tag. Even if you can find the Galaxy Book on sale, we still recommend exploring other options.

Its display gets easily washed out by mild viewing angles, which makes it hard to recommend for anyone who likes to read a lot or spend a lot of time getting work done. That poor display also isn't great for streaming movies or video games, both of which you can obviously do on similarly priced laptops like the M1 MacBook Air or HP Spectre x360 14t with better displays.

The Galaxy Book is in a weird spot: it costs as much as laptops with the same or slightly better specs but doesn't stack up very well against cheaper laptops, either. A bad display and mediocre keyboard hold this laptop back from being an otherwise decent package. But for $1,000, you should expect a little more decent.

Prices were accurate at the time this article was published but may change over time.

Jordan has been writing about and reviewing technology since 2017, with products ranging from tablets and apps to fanny packs and home office gear.

See all of Jordan McMahon's reviews

Our team is here for one purpose: to help you buy the best stuff and love what you own. Our writers, editors, and lab technicians obsess over the products we cover to make sure you're confident and satisfied. Have a different opinion about something we recommend? Email us and we'll compare notes.