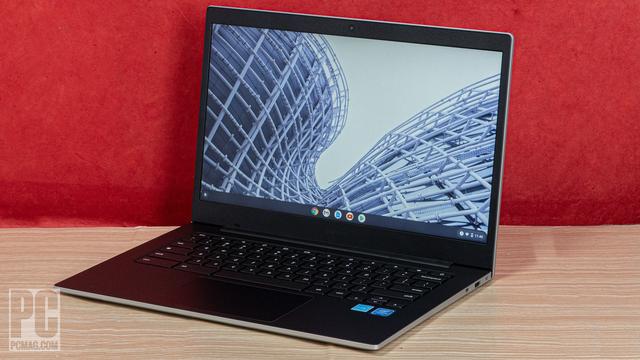 Reviewing the Samsung Galaxy Chromebook Go has been something of a rollercoaster. A simple one, with one big lift hill and a very quick drop. To the naked eye, if you can ignore its hulking bezels, this looks extremely well-appointed. It has a 14-inch screen, something you don't always see in the generally-smaller world of Chromebooks.

It has a classy black inner and a stock silvery outer case. There are plenty of ports, one of which allows you to slot in an LTE SIM and get online wherever you might be. We started our time with it pretty excited. What could there possibly be to complain about?

Here is the Samsung Galaxy Chromebook Go configuration sent to TechRadar for review:

We have a problem with the Galaxy Chromebook Go's price. Straight up: it's too expensive for what it is. This particular model, with LTE connectivity (locked to AT&T in the US, and open in the UK), attempts to convince you to spend $350 (£399, around AU$555) for a machine which sits right at the bottom of the modern spec barrel (at least outside of its connectivity and, perhaps, its larger-than-the-Chromebook-usual 14-inch display).

If you're in the US, there's a $250 model available which omits the cellular connectivity - even that, as we'll get to, might be slightly too much to ask, but it's much closer to the point at which this should be sitting.

Australian readers may be out of luck here: we've seen the non-LTE listed for AU$480 and the LTE version for AU$555, but these appeared to be US imports so tread with caution.

The main issue with this price is that low-end Chromebooks are meant to be truly affordable - see the Asus C233, often discounted below half this price - and the Galaxy Chromebook Go just creeps over the line. The convenience of an always-connected machine doesn't justify the extra cash, given that you'll need the expense of a SIM card with a data plan alongside it, and since many cellular providers are happy to allow limited mobile hotspot use, you're probably better off using the phone you already have in your pocket - and that might even pack 5G...which this doesn't.

The other problem is that this (at least in UK) is slightly more expensive than the pretty-dire but also LTE-equipped ARM-based Samsung Galaxy Book Go, with which it shares the majority of its design language. Samsung is in competition with itself, then, but perhaps it's in a race to the bottom.

It's funny what difference a little color - or the complete lack of it - can make. In the case of the Samsung Chromebook Go, the company has opted to give the user-facing surfaces a lightly textured matte black plastic finish which, whether you like it or not, does set it apart from most of the aluminium-hued metal-aping low-end laptops on the market.

Does it work? That's a matter of taste: we quite like how unfussy it looks, particularly when bordered by the silvery edging of the lid and base. It might even edge towards being cool, if this is your kind of thing - or, conversely, it might highlight the cheapness rather than attempting to obscure it.

The colouation does put the panel into focus, making this solid for work, and even with no keyboard backlighting, the glow of the screen is enough to pick out the white legend on the keys in the dark. Typing action is good, but the flexible keyboard deck is noticeable.

That's a tentative win depending on taste, then, but we do have some design gripes which can't easily be brushed away. For one, the bezels are absolutely enormous, with a thick top edge housing the webcam, substantial sides, and a massive chin.

Despite its width, Samsung seems to have run out of room for the keyboard 90% of the way through laying it out, choosing (on our UK-layout model) to issue a squashed-up Return key which is just small enough to throw off one's touch-typing instincts, and rubbed salt in the wound by teaming it with a power key right above a cut-back Backspace. This may be the Chromebook formula, but that doesn't stop it being an unnecessary annoyance.

On the outside the Samsung Chromebook Go is about as generic as a Chromebook comes: it's grey, the edges are sharp and straight, and it looks thin while concealing a reasonably bulbous underbelly. The usual laptop tricks, and they work well enough, as this certainly won't look unattractive sliding out of your bag beyond the garish Chromebook logo.

Underneath sit perforated ports for a pair of down-firing speakers - but no ventilation, as this is entirely passively cooled. The amount of heat-dissipation tech that's surely packed inside does give this a little heft, but not to the point that it feels heavy.

Ports aren't a huge concern on a Chromebook, but this provides a fair selection, duplicating those seen on the ARM-based Galaxy Book Go. That means a Type-C port on the left along with an audio combo jack and microSD reader, then a Type-A port, a second Type-C port compatible with Displayport out, a Kensington lock niche, and a SIM slot.

There's genuinely little to be upset about apart from a lack of HDMI - if you're looking to expand a Chromebook beyond what's offered here, perhaps you don't actually want a Chromebook.

Here's how the Samsung Galaxy Chromebook Go performed in our suite of benchmark tests:

The Samsung Chromebook Go is, well, a Chromebook, and one on the lower end of that scale. It's not something you necessarily approach looking for raw power, and there are plenty of options out there if that's really what you want.

The question isn't really whether this can move mountains, it's whether it's an acceptable machine to use day-to-day. If you're really careful and don't expect too much, it just might be. With caveats.

It'll happily run several browser windows streaming media side-by-side, for example, and it can cope admirably with a Twitch squad stream. Opening work apps - the Google suite, or Office 365's online tools - was snappy enough too. It's worth, at this point, directly comparing this to its closest cousin in the form of the Windows-on-ARM Samsung Galaxy Book Go: this offers a better on-the-browser experience.

It's a little smoother, it's less jarring, and you get the sense that even a base-of-the-totem-pole Celeron is a smarter choice for low-power laptops than ARM. If anything, perhaps Samsung got the hardware platforms of the two the wrong way around, because there's a gulf between the performance benchmarks of the pair.

Being a modern Chromebook, this can do more than just browser-slinging. Its Android performance is fair if not particularly stunning, running the likes of Asphalt 8 at a juddery yet just-playable frame rate, and working its way easily through more plain apps, though do bear in mind that there's no touch screen. Debian Linux performance, through ChromeOS' virtual machine, is also acceptable - not remarkable by any means, but we were able to fire up apps including unfortunately-named Photoshop-alike Gimp without incident.

That's where the positives end, though. Drawing in Gimp with a simple tool highlights some of the Chromebook Go's biggest flaws. The trackpad is terrible, often ignoring inputs or jumping from point to point - and pressing it to click is enough to flex the entire keyboard deck. Performance is far from smooth, with notable jerks and stutters hampering just about every task. And the screen has basically never heard of contrast. It's not quite as bad as the panel in the Galaxy Book Go, at least in terms of visibility, but it's lower-res and thoroughly unpleasant in its own way.

The Galaxy Chromebook Go is also hindered by its lack of RAM. Yes, you can push it, and 4GB is more than many Chromebooks get, but it's still not quite enough to counteract Chrome's legendarily cruel memory management if you happen to overload it with tabs or windows. That's not entirely unexpected - again, this is a Chromebook on the lower end, and you should expect exactly that kind of performance - but we can't say we weren't disappointed.

Good news in the battery department: Samsung claims a solid 12 hours, and we actually ended up getting quite close to that at a hair under 11:20 in our battery test.

Not a huge surprise: Intel's Celeron CXASDASD is a very cool-running chip, even when you're pushing it, meaning there's little in the way of wasted energy. Working with it over a few days, the Galaxy Chromebook Go felt like something that barely needed plugging in at all.

That's a credit to this Chromebook, and a big reason it has earned the score it has: if you're working, studying, or just browsing hard, taking this somewhere comfortable and convenient won't be a challenge. Whatever we've said about its price-to-performance metrics, you may want to pick this up simply because of its staying power.

You need to go really mobileIf your phone can't hotspot and you need to get connected away from Wi-Fi, this is one of the most cost-effective ways to work on a mobile basis. The extensive battery doesn't hurt, either.

You need a way to access Android and LinuxThis is a jack of all trades. While it may be a master of none, the flexibility of being able to use Android apps on a laptop - or easily branch out to Linux software if you need to - has to be one of its key features.

You need a larger screenAt 14 inches, this offers more screen real estate than many competing Chromebooks, and a spacious keyboard and trackpad too. It's not a huge laptop, but it's just big enough that you won't feel like you're working in miniature.

You're looking for powerThere's not much grunt in here, and while it'll begrudgingly grind its way through most tasks, you'll be disappointed if you want to push it beyond basic web apps or simple media use.

You're an artist or creativeThis screen is pretty terrible. Its contrast is awful, and its 1336x768 resolution is weak: honestly, it's not very good for media use, but if you're looking for color clarity or pixel precision it's even worse.

You want something toughRigid this is not: it's thoroughly bendy. We're not as scared for the integrity of the screen as we are with the Galaxy Book Go, but you should definitely treat it nice.