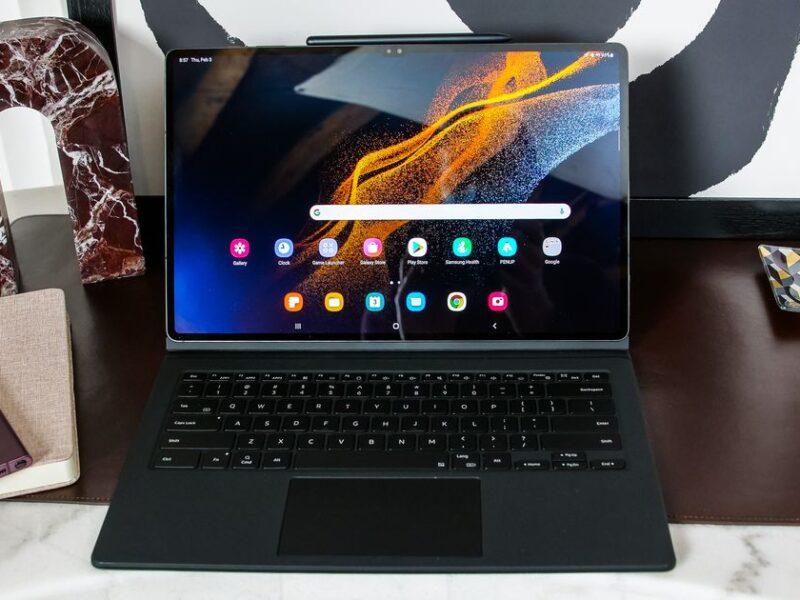 Samsung's Galaxy Tab S8 Ultra should have been a Chromebook

Samsung's Galaxy Tab S8 Ultra looks like it's going to be amazing if your tablet is feeling a little too small these days. Announced at Samsung's Unpacked event on Wednesday with its new Galaxy S22 phones, the Tab S8 Ultra is a gigantic 14.6-inch premium tablet with a full-size detachable backlit keyboard that includes a touchpad and support for an updated S Pen stylus for improved pen-on-paper feel on the display. It also has some killer specs including dual, front-facing 12-megapixel cameras, Wi-Fi 6E and 4K video capture.

The tablet, which is available for preorder now and ships later this month, certainly looks like it'll be worthy competition for Apple's 12.9-inch iPad Pro (and it has some advantages Apple should consider adding). Both tablets are made for entertainment, creative work and productivity. The iPad Pro can do those first two things no problem, and it'll likely be the same for the Tab S8 Ultra. But iPadOS and Android are still behind when it comes to productivity.

That's why it would have made more sense to skip Android for this device and make what could've been the best Chromebook detachable two-in-one to date. Chrome OS's Play store integration combined with web apps and general flexibility for work and entertainment makes it a better choice. Here's why.

DeX is great, but still a workaround

DeX, Samsung's desktop-experience interface for its Android devices, is key to the Tab S8 Ultra's appeal as a productivity machine. It essentially gives the tablet an interface that looks more like Windows or MacOS and allows Android greater usability for work and school, including keyboard, mouse and external monitor support. And it also lets you use windowed versions of your apps for easier multitasking with them side-by-side or overlapping.

I haven't used the latest version of DeX that will be on the S8 Ultra, but I have used previous versions of it, going back to when it first arrived on a Galaxy Tab with the S4. It has always felt like a work in progress. Not all apps work in DeX mode, and even those that do aren't always supported 100%.

Chromebooks have desktop and tablet modes

It's pretty clear the Tab S8 Ultra is designed to be equal parts tablet and laptop, so why not give it an OS that can better handle switching between the two? Chromebooks can do just that. Models like Lenovo's Chromebook Duet and HP's Chromebook x2 11 have the same two-in-one detachable keyboard design as the Ultra.

Used as a laptop, these Chromebooks have a traditional desktop OS experience. But remove the keyboard and Chrome OS can switch to a more touch-friendly interface, complete with multitouch gestures to help with navigation. They're pen-enabled, too, so using Samsung's excellent S Pen for writing or drawing is still an option.

Samsung worked with Google to make the Tab S8 series better for video calling and live sharing using Google Duo. You'll be able to do things like co-watch videos on YouTube or collaborate using Google's whiteboard app, Jamboard. It also has two high-resolution cameras in front and software that can automatically reframe the picture to stay focused on you and others on camera.

The thing is, when it comes to videoconferencing, it's Meet, Zoom and Teams most people care about, which Chromebooks can handle no problem, all while other apps are running in the background for multitasking.

Gaming would still be great, too

The biggest appeal of the Ultra for many will be for gaming. On an OLED screen that size, the best Android games will no doubt pop, and combined with its quad speakers, it'll likely deliver an amazing, immersive experience.

However, switching to Chrome OS doesn't change any of that, since it would still have access to the Play Store for loading up Android games on this tablet. Plus, cloud gaming services like Nvidia GeForce Now, Microsoft Xbox Cloud Gaming and Google Stadia are all accessible on a Chromebook, too. And with the Tab S8's Wi-Fi 6E, it'll have plenty of wireless speed for a smooth streaming experience.

The biggest hurdle for a Tab S8 Ultra as a Chromebook would likely be the price. The Ultra starts at $1,100 and I wouldn't expect that price to come down much with a switch from Android to Chrome OS. A lot of people still think of Chromebooks as cheap with limited capabilities, and paying for a premium one is out of the question. But again, Chrome offers greater flexibility than Android with devices like this, and that's what I would certainly want at this price.