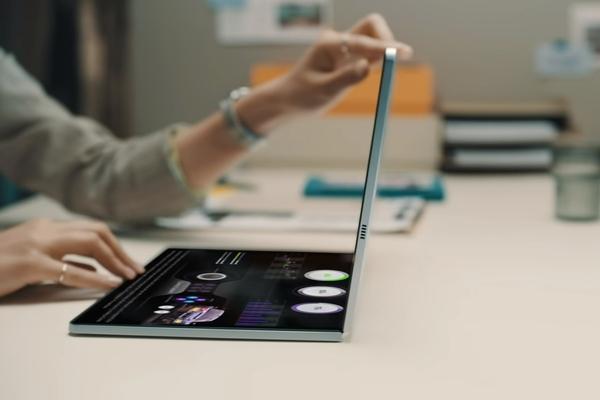 Samsung has been making waves in the past few weeks thanks to its foldable phones, the Galaxy Z Flip 3 and Z Fold 3. However, while the company has been making foldable phones for a couple of years, it’s never made a laptop with a foldable display. That could be set to change, as references to a Samsung Galaxy Book Fold device have been spotted online.

The information comes from well-known leakster Ice Universe on Twitter, who shared a screenshot with the name of the device. It’s called the Galaxy Book Fold 17, suggesting it sports a 17-inch display. The font used in the image is similar to what’s found throughout Samsung’s website, but there doesn’t seem to be a public page with this text.

However, this does throw us back to May of this year, when Samsung Display teased a device exactly like this. During the SID Display Week 2021 event, the company showed off a number of form factors enabled by OLED displays. That included, you guessed it, a 17-inch foldable laptop. You can see that video below, with the 17-inch laptop concept showing up at around the 52-second mark. 17 inches would be the size when the display is unfolded, and it could be folded into two smaller displays.

Samsung has also teased other innovative concepts with OLED displays, like an under-display camera for laptops. That was first teased all the way back in January, but we ended up seeing that technology first on the Samsung Galaxy Z Fold 3.

While laptops with foldable displays are rare, this isn’t the first one we’ve ever seen, since Lenovo has attempted this with the ThinkPad X1 Fold. That device was plagued by middling performance, courtesy of the Intel Lakefield chipset inside. Lakefield was Intel’s attempt at having powerful cores and efficient cores in the same package, but it didn’t work out in the best way. However, the upcoming Intel Alder Lake processors seem to be a significantly better take on that concept, so hopefully we’ll see more and better devices with this form factor.

Unfortunately, we don’t have much else to go off of. We’ll have to wait and see if and when Samsung announces the Galaxy Book Fold. The company has been making some great Windows laptops like the Galaxy Book Go and Book Pro, so it would be interesting to see more innovative devices as well.

how do you copy and paste on a samsung laptop