Home Article What to do when you find an AirTag, or are told by your iPhone that one is following you 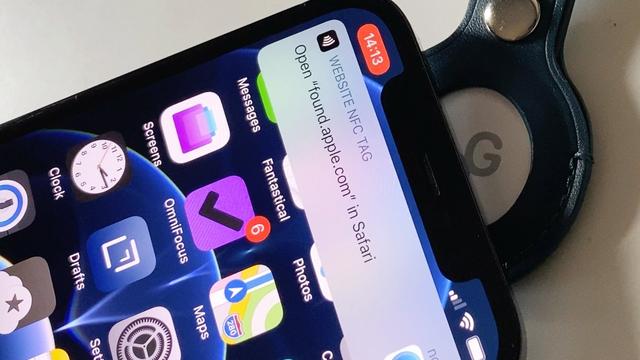 What to do when you find an AirTag, or are told by your iPhone that one is following you

If you are informed by your iPhone that an AirTag is following you, the system is operating as designed, so don't throw the AirTag away! Here's what you can do to either contact the owner of the lost property, or to help law enforcement find whoever's trying to track you.

The idea is that when you find an AirTag, you hold your iPhone or Android phone next to it, and that's it, you can return the device to its own. Ultimately, this is exactly what happens, but it's slow enough that you'll think you're doing it wrong.

Then by default, what you find out from an AirTag is limited —unless the owner has both marked it as lost, and has set a message for you.

Regardless of whether the owner has done that, or even if this is a bad actor planting an AirTag on you, the first steps are the same. You get your iPhone to read the AirTag.

It's just that there are two ways to do that. One with the Find My app, and one without.

Whether you do this, or use the Find My app, you have to be oddly precise where you hold the AirTag when you're trying to read it. Pressing the white side against the top of the iPhone, and holding slightly back toward the rear of the phone, seems to work.

Finding the right spot is a process of trying it out, moving the AirTag around the top and back of the iPhone, and pausing at intervals. This is where you will conclude that it isn't working, but once you hit the right spot, the notification appears pretty quickly.

It's hard to see why there are these two different ways to read an AirTag when they are practically the same, and do get you the same result. But whatever the reason, once you've found an AirTag like this, you're on your way to the Found website.

What you see on Apple's Found site

Once you've tapped to go to found.apple.com, you always get a display page about the AirTag in question. Actually, it's the first of several pages you could choose to read, but the first is important, and it's the first that may change.

This is where you may get a personal message from the owner of the AirTag, maybe listing their email address, maybe offering a reward. And you may also get their phone number. It's up to them.

If they haven't included a message or phone number, and if they haven't put their AirTag in Lost Mode, you still get some information.

It's just little use when you've found an AirTag that has genuinely been lost. If you're sure it wasn't planted on you, the best thing to do is put it somewhere safe.

If it was planted on you and you found it through safety measures that Samsung's and Tile's trackers don't have, then you should disable the AirTag's tracking through Apple's Found page. And then, you should contact law enforcement.

Apple will start nagging you with warning messages about how you're being followed by an unknown AirTag. And for another, bad actors can use the AirTag as the worst possible tool to track somebody secretly, given that it warns people with an iPhone that it is in proximity, or can be found by a user with an Android device with Apple's scanner app.

And, the AirTag is serialized.

At the very least, you can find and copy a serial number for a lost AirTag.

Tracking down the tracker

There's no way for you, the user, to readily find the owner of an AirTag unless they've put it in Lost Mode and left you a message —or if you tell law enforcement. If police ask Apple to identify an AirTag serial number, Apple will do it.

You just need the serial number. The "About This AirTag" page will always show you this toward the top of the screen.

There's also always an explanatory message from Apple for people who don't happen to know what an AirTag is —and yet did know enough to poke it with their iPhone.

It explains that the "serial number is registered to the owner of this AirTag," and shows you that number. "If this AirTag is not familiar to you, learn how to disable it and stop sharing your location."

Tapping on Instructions for disabling takes you to another screen, which still shows that serial number. It gives instructions about removing the battery so that "the location of this AirTag is no longer visible to its owner."

Most significantly, though, there is also a Save serial number button. Tap that and you open Safari's regular Share Sheet, with the ability to copy the serial number, or send it over Mail and Messages.

Apple does also provide a warning, saying that if you feel your safety is at risk, "contact your local law enforcement" with the serial number.

Alternatively, when you find an AirTag on an item, look up. See if there's anyone frantically searching the area because they've got an iPhone without a U1 chip.

Or see if there's anyone walking directly toward you while staring at the instructions on their iPhone screen.