Home Article Why Professionals Will Actually Want a 2021 MacBook Pro

Why Professionals Will Actually Want a 2021 MacBook Pro

The Apple Silicon MacBook Pro refresh has arrived, and it’s given many people cause for celebration. Not only are the new laptops incredibly powerful, but the revision points to a new direction for professional MacBooks at Apple.

If there’s one firm take-away from the 2021 MacBook Pro refresh it’s that Apple is finally taking on board many of the criticisms that the company has received over the past five or so years. This isn’t just good for MacBook Pro users, but for anyone immersed in the Apple ecosystem in general.

Few companies can get away with being bullish like Apple can. They were the first major vendor to ditch the CD drive, the iPhone has never had a removable battery or storage option, and the “courage” the company displayed by removing the iPhone’s headphone jack is still scoffed at by many.

But the 2021 MacBook Pro refresh demonstrates that the company can walk back some of its more controversial design statements. Apple has added features that it took away years ago and back-pedaled on its vision of how its products should be used.

It feels like the company is now listening to users and taking on board how customers want to use their products. And it’s not even as if this is a forced hand, since the advances made with 2020’s M1 chip have put the company in a very strong position when it comes to raw performance.

That’s not to say everything is hunky-dory. The MacBook Air still has too few ports and Apple neglected to add a USB-C port to 2021’s iPhone 13. That’s before you even consider how poorly Apple products rank in terms of repairability. It’s still a confident stride in the right direction, though.

The M1 is a beast of a chip that even impresses when running 64-bit x86 apps in compatibility mode. Software that has been optimized for Apple’s ARM-based architecture not only performs better than its Intel-based equivalents, but it also does so far more efficiently.

The M1 Max builds upon this strength, turbo-charging the 14-inch and 16-inch MacBook Pro models with up to 10 CPU cores, 32 GPU cores, 64GB of unified memory, and a memory bandwidth of up to 400GB/sec.

If you don’t need quite that much power you can settle for 16 GPU cores, 32GB of RAM, and a memory bandwidth of 200GB/sec with the slightly less performant M1 Pro “binned” chip.

The 16-inch models deliver this performance with up to 21 hours of battery life (down to 17 hours on the 14-inch version). Apple claims it can almost double the performance-per-watt efficiency of a comparable 8-core laptop chip. While these numbers are to be taken with a grain of salt given the source, the M1 chip’s real-world performance speaks for itself.

RELATEDM1 Pro or M1 Max MacBook: Which Should You Buy?

And while we’re talking about power, the SSD read speed has been upped to 7.4GB/second, which blows even Sony’s industry-leading PlayStation 5 read speed (5.5GB/sec) out of the water.

Finally, if you like to sequester yourself behind a wall of monitors you’ll be pleased to hear that the M1 Max supports up to four external displays, three at 6K resolution and one at 4K (with just two 6K displays supported on the M1 Pro).

Available with a 14-inch or 16-inch display, Apple's 2021 MacBook Pro with M1 Pro or M1 Max hardware are the fastest Macs you can buy.

MagSafe is Back, Baby

Apple’s decision to replace MagSafe with USB-C charging in the fourth-generation 2016 MacBook Pro was perplexing to many. But that decision has been reversed with the fifth-generation M1 Pro and M1 Max models. MagSafe 3 is the newest iteration of the magnetic charger that can be traced back to the first-generation MacBook Pro released in 2006.

MagSafe garnered a lot of praise when it was first seen all those years ago for its ability to save your laptop or charger should you happen to snag the cord. Instead of the laptop flying off the table (or the charger breaking), the cord easily comes away from the port thanks to its magnetic design. 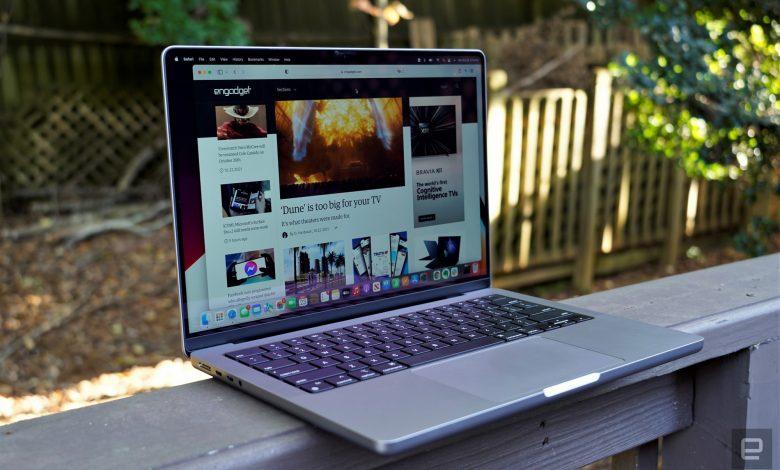 Another useful feature of MagSafe is a charging indicator, which gives you an at-a-glance idea of what state your laptop is in. Green means it’s powered up and fully charged, while yellow means it’s still got some way to go. The USB-C charging solution that replaced it in 2016 had no such indicator.

Not only is MagSafe back: It’s now better than ever. The new charger features a braided cord like that seen on the M1 iMac revision, plus the 96w version included in all but the base model 14-inch MacBook Pro allows you to charge your battery to 50% in only 30 minutes.

Another controversial decision Apple made in 2016’s MacBook Pro revision was the addition of the Touch Bar in all but the base 13-inch model. This OLED strip replaced the top row of function keys with a dynamic area that was meant to offer similar functionality but proved divisive.

App developers could take advantage of the Touch Bar, but the position of it along with the loss of physical buttons made it unpopular among many users. There were some staunch advocates for what Apple was trying to achieve with the Touch Bar, while others remained indifferent.

With the M1 Pro and M1 Max models, the Touch Bar is no more. Apple has instead replaced the integrated display with physical function keys and a combined Touch ID and power button. You can’t please all of the people all of the time, but you can build a keyboard that works for the majority of users.

With the iPhone 13 Pro, Apple finally added a high refresh rate adaptive sync display to its smartphones. Only a month later and the feature has now become standard across the whole MacBook Pro range, which is the biggest leap forward in MacBook display technology since the original Retina MacBook Pro released in 2012.

High refresh rate displays aren’t just for gamers, they make the time you spend on the desktop more pleasant and responsive too. Coupled with the power in the new M1 Pro and M1 Max chips, the ProMotion display on all new models of MacBook Pro (even the base 14-inch version) will make basic operations like scrolling a webpage (and yes, playing games) smoother than ever before.

Not only is the refresh rate doubled, a sustained brightness level of 1000 nits means you can use your MacBook in bright sunlight without having to squint at the screen. For video content producers, keen movie buffs, and gamers, a peak brightness of 1600 nits steers the MacBook Pro well-clear of “fake HDR” territory.

Throw Away (Some of) Your Dongles

You’ve probably amassed a collection of dongles and adapters if you purchased a MacBook (let alone a MacBook Pro) in the last five or so years. These have been necessary if you want to plug your MacBook into most TVs or monitors or use a memory card.

Good news: you might not need them anymore. The M1 Pro and M1 Max MacBook Pro models now feature an HDMI port and an SDXC slot, features that should never have gone anywhere in a laptop that’s intended for “Pro” users. You’ll also get three USB-C Thunderbolt 4 ports which support up to 40GB/sec transfer rates, charging, and DisplayPort over USB-C.

Interestingly, the headphone jack can support high impedance headphones like studio monitors, a pro feature that may remove the need to carry a headphone jack for audio producers. (A courageous decision, no doubt.)

Unfortunately, there’s no USB-A or Ethernet port, the latter of which Apple could have included on the power adapter as they did with the higher-end M1 iMac models released in 2020. It’s also worth noting that the HDMI port uses the 2.0b standard (4K at 60Hz), missing out on faster HDMI 2.1 speeds.

The 2016 MacBook Pro revision was notorious for its tendency to thermal throttle, where the performance of the chip would be capped to prevent damage caused by heat buildup. While we haven’t seen the real-world performance, Apple’s claims that a new cooling system moves 50% more air this time round offer some hope.

Keep in mind that the M1 MacBook Air and base-model iMac don’t have a fan in them at all, and they both manage to deliver excellent performance in most day-to-day tasks. If you don’t need the power, an M1 MacBook Air may be a better buy on account of its more comfortable wedge-shaped design.

For anyone who finds the 2021 MacBook Pro too thick to comfortably work on, an external keyboard and laptop stand could be a good compromise for extended sessions at a desk.

The Notch Is Good, Actually

There’s always one big point of division in an Apple release, and this time around it’s the notch. Just like the iPhone notch, the MacBook Pro notch occupies the center of the screen along the top edge of the bezel and houses a 1080p FaceTime camera (but no Face ID sensors, disappointingly).

By looking at the M1 MacBook Pro, it seems that Apple decided to cannibalize the bezel to get more screen real estate rather than introducing a notch at the cost of screen space. The notch now occupies part of the macOS menu bar, where very little action takes place.

In full-screen apps or 16:9 content, a black bar will appear alongside the notch and nothing on-screen will be obscured. App developers can choose to integrate the notch into their apps if they want but by default apps will display full-screen just as they do on any other Mac model.

And Then There’s the Price

Of course, Apple tax is real, and the MacBook Pro is an expensive beast. But you already knew that before the announcement was made, right? What’s clear is that these are the new best MacBooks for professionals.

There was more announced at the event, including some new AirPods and the usual who’s who of Apple executives and designers stood in front of green screens. You can watch the full Apple event here.

READ NEXTTim BrookesTim Brookes is a technology writer with more than a decade of experience. He's invested in the Apple ecosystem, with experience covering Macs, iPhones, and iPads for publications like Zapier and MakeUseOf.Read Full Bio »The above article may contain affiliate links, which help support How-To Geek.
why is my apple laptop screen grey